The cost of living increase is calculated using CPI-W, an inflation measure for workers.  The problem is the government shutdown has stopped economic statistical releases, including CPI, where September's figures were due to be released this Wednesday.

The cost of living increase, or COLA, isn't just used to increase social security benefits in order to account for inflation, it is used for a host of government benefits to adjust for cost of living increases.  COLA impacts way more than the estimated 58 million Americans receiving social security benefits and the adjustment can mean the difference between being able to pay one's bills or not for the next year.  Below is a graph of past COLA increases since 2000 and as we can see, the deflation of the Great Recession caused for two years in a row social security and other government benefits not to be increased.  Generally speaking, inflation is low, so it is reasonable to assume there will be a low COLA adjustment for 2014.  The graph also shows CPI-W, index on the left (COLA on the right) to get a feel for what kind of inflation has been occurring for 2013. 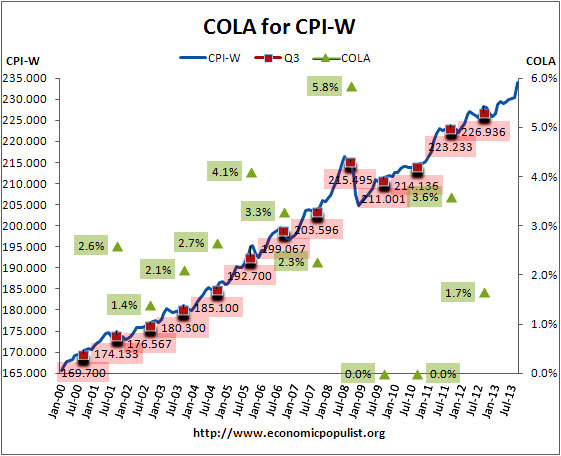 The increase for 2013 was 1.7% but in both 2009 and 2010 there was no increase in benefits due to the deflation caused by the Great recession.  So how did the press come to announce COLA when the social security administration has not issued the 2014 figures?  The press is assuming what the September inflation figures are, which is frankly unwise.

The COLA, or Cost of Living Adjustments are a strange brew indeed in how they are calculated.  The COLA is taken from not seasonally adjusted CPI-W data, using only the previous third quarter, or the months of July, August and September, to calculate.  The magic formula for how increases are calculated, upon which so many depend is:

Generally speaking inflation has been subdued in 2013.  That said, we can take an upper and lower bound for September's change in the CPI-W and thus calculate the COLA range for 2014.  The question becomes what are the upper and lower bounds for the monthly percentage change in CPI-W?  The worst monthly drop was in November 2008 with a -2.3% decline.  The highest monthly gain since 2000, was 1.51% in September 2005.  Both of these monthly changes are improbable for September 2013's figures and most likely CPI-W for September would be between -0.5% and 0.5%.

If we assume a lower bound monthly change we get a September 2013 CPI-W index of 225.061.  If we take the upper bound of 1.51% monthly change we get a September 2013 index of 233.837.  Plugging in these two values into the COLA calculation, we get a maximum cost of living adjustment increase of 2.0% to a -0.8% change for 2014.  COLA never decreases so a negative calculation means the worst case scenario would be no cost of living adjustment for 2014 if CPI-W suddenly plunged in September.  As we can see, this is quite a range on a cost of living estimate.  If we take the average increase for the last year, we see a 0.12% monthly increase, which would give a CPI-W September index of 230.359 with a resulting 2014 COLA adjustment of 1.5%.  Yet there is a problem taking the annual average for CPI-W is not seasonally adjusted and inflation in the third quarter can be very different from the second.

Frankly it is plain irresponsible of the press to announce COLA before at least the September inflation figures are released.  Unfortunately many people will assume the press quoted figure of 1.5% is the real increase, where clearly COLA could be very different from what the press is quoting now.  People are living on the edge in America and the difference between no increase and a 2.0% cost of living adjustment is huge to them.  Additionally It is also very possible the CPI-W September monthly percentage change is negative, on the median and considering other inflationary factors.

To show the variance in COLA, let's take a more probable negative monthly September change, -0.6%.  This actually just happened last November 2012, so completely inside the boundary of what the September 2013 CPI-W inflation figure could be.  In this case, the impact to COLA is huge and the resulting 2014 cost of living adjustment would be 0.9%.

It is safe to assume COLA will be between zero and 2.0%.  To illustrate what this means in real dollars, if the primary insurance amount is $1000, that beneficiary recipient could see anywhere from $1000 to $1020 per month in 2014 and with amounts this low, that $20 bill can make the difference between paying the electricity or not.

When the actual September statistics are available, assuming Congress don't destroy the United States with their shenanigans, we will be posting the real COLA.  In the interim, shame on you press for once again trying to beat actual facts to the headline punch.

September CPI to be released October 30th, so this is the earliest we will know what COLA is.

BLS field reps normally spend the entire month visiting stores, car dealers, hospitals, et al to collect prices; they were furloughed for more than half of October; the Cleveland Fed has a note on the troubles that introduces into the data:

CPI is bad enough but throwing the statistical error that goes on for months is going to affect COLA, quantitative easing and any real valued data.

Thanks for this find (and thank you Cleveland Fed), we'll have to write a note in each overview, amplify what error margins they publish now.

I wonder if the SSA will delay releasing COLA as a result of this.

there'll be a 42 days gap between the Sept & Oct jobs reports surveys, then a 21 day period between Oct & Nov...housing starts, as unrealiable as they are now, are also collected by census field reps, who visit housing permit offices and conduct road canvasses to gather the sample used in that report, which will now be half the size it normally is...

As usual the things that matter get wasted by these crazy corrupt incompetents in D.C.