The reason manufacturing output increased 0.7% is a blow out jump of 6.8% in autos & parts, with vehicles alone increasing 10.4% in a month. Vehicles are up 27.9% from January 2011. Without autos and parts, manufacturing increased 0.3%. Below is a graph of the Federal Reserve's industrial production index for just automotive products, seasonally adjusted. What we see is a recovery of the automotive industry in the United States. 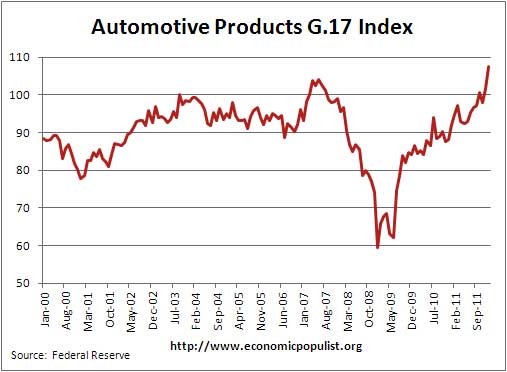 The January industrial production flat line is due to utilities, which showed a -2.5% change and mines, which also declined, -1.8%.

The production of consumer goods edged down 0.1 percent in January. The index for consumer durables increased 3.8 percent, but the index for consumer nondurables declined 1.2 percent. Among durables, the production of automotive products climbed 5.8 percent, and gains were also recorded for home electronics; appliances, furniture, and carpeting; and miscellaneous goods. Among consumer nondurables, the output of non-energy goods decreased 0.1 percent, as a decline in foods and tobacco offset gains in clothing, chemical products, and paper products. The output of consumer energy products fell 4.0 percent, with substantial decreases for both residential utilities and fuels.

The production of defense and space equipment increased 0.8 percent in January following a decline of 0.6 percent in December.

Below is a graph of just the manufacturing index, part of industrial production. For 2011, about 3.02% of total industrial production, non-energy, is advanced technology and advanced technology manufacturing has declined by -0.4% since January 2011. Non-energy makes up 72.18% of total industrial production. Contained within advanced technology are semiconductors, electronics components. Semiconductors has declined, - 2.4% since January 2011. This is not good. Communications equipment, while up 1.7% from a year ago, contains cell phones, landlines, radio, TV, broadcast gear. It's clearly been offshore outsourced from the below graph. We know there have been major paradigm shifts in these technological areas since 2008, yet look at overall production. Telephones were offshore outsourced ages ago, set-top boxes are notorious to hire foreign guest workers and squeeze engineers and have been doing so for over a decade, so the recent drop has to be newer technologies, being offshore outsourced. 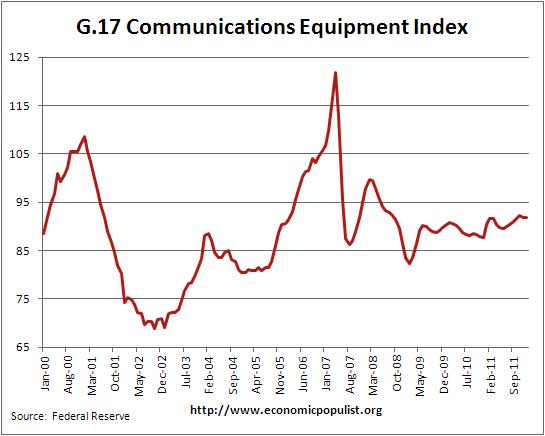 Below is the graph of raw capacity to total industrial production, just manufacturing and finally zeroing in on autos & light trucks. This is just how much capacity does the U.S. have to make stuff. Look at how total capacity declined, for the first time in the historical data, during the recession. This index represents the raw facilities, potential to make stuff. Notice also how flat manufacturing overall is. Then finally, notice the beyond belief come-back of autos & light truck capacity in the United States. One might look at the below, plus the above industrial production numbers and contemplate policy. Which industry was supported recently by our government? Just sayin', this ain't religion, it's numbers man and boy autos looks swell! 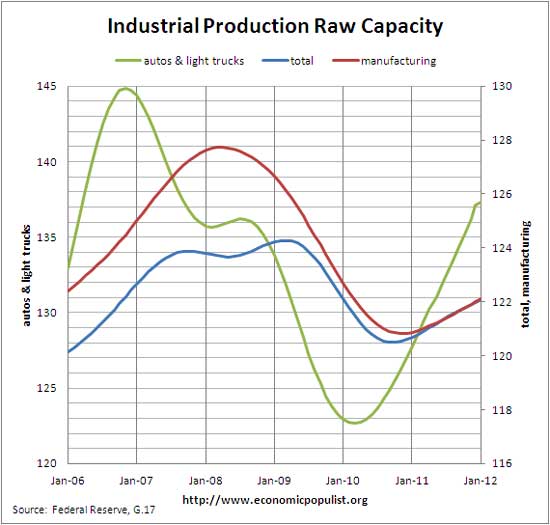