The FDIC has released it's quarterly report and what pops out at you first is the fact the reserve ratio is currently negative. 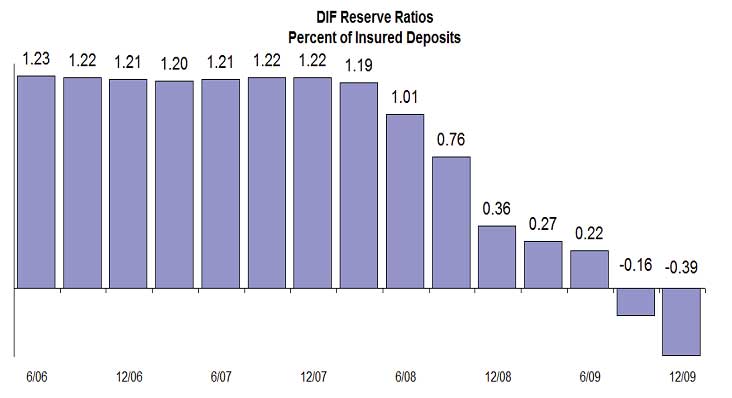 The Deposit Insurance Fund (DIF) decreased by $12.6 billion during the fourth quarter to a negative $20.9 billion (unaudited) primarily because of $17.8 billion in additional provisions for bank failures. Also, unrealized losses on available-for-sale securities combined with operating expenses reduced the fund by $692 million.

Accrued assessment income added $3.1 billion to the fund during the quarter, and interest earned, combined with termination fees on loss share guarantees and surcharges from the Temporary Liquidity Guarantee Program added $2.8 billion. For the year, the fund balance shrank by $38.1 billion, compared to a $35.1 billion decrease in 2008.

Now bear in mind the FDIC got prepay of insurance fees for 3 years and this ratio is against projected future losses. So, currently the FDIC is not broke, but what this implies eventually they are gonna have to borrow from the Treasury (i.e. us). Also, the reserve ratio is supposed to be maintained around 1.15, and if it drops, the FDIC has to make plans to correct it within 5 years.

The FDIC got $46 billion from these prepays and now has $66 billion cash (liquid assets) on hand. So, they aren't gonna run out of money in 2010, but recall here comes CRE.

Forty-five insured institutions with combined assets of $65.0 billion failed during the fourth quarter of 2009, at an estimated cost of $10.2 billion.

The second thing that pops out, troubled banks have increased from 552 to 702. The FDIC insures 8012 banking institutions. That's an 8.76% ratio of troubled to all institutions. The problem bank list has $402.78 billion in assets. This is at the highest level since 1993 and lest we forget, we had a S&L crisis. (troubled is not failed, just heading down the road to the cliff).

Calculated Risk maintains a unofficial problem bank list, which will be updated.