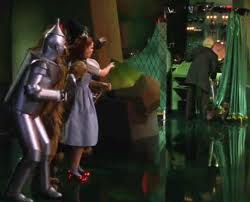 Who says the Federal Reserve isn't good for something? They just made $80.9 billion dollars in 2010.

The Federal Reserve Board on Monday announced preliminary unaudited results indicating that the Reserve Banks provided for payments of approximately $78.4 billion of their estimated 2010 net income of $80.9 billion to the U.S. Treasury. This represents a $31.0 billion increase in payments to the U.S. Treasury over 2009 ($47.4 billion of $53.4 billion of net income). The increase was due primarily to increased interest income earned on securities holdings during 2010.

On the other hand, what they made the money on are securities from Freddie Mac and Fannie Mae, or GSEs, U.S. Treasuries and those infamous mortgage backed securities or toxic assets them purchased.

The Federal Reserve Banks' 2010 net income was derived primarily from $76.2 billion in income on securities acquired through open market operations (federal agency and government-sponsored enterprise (GSE) mortgage-backed securities, U.S. Treasury securities, and GSE debt securities); $7.1 billion in net income from consolidated limited liability companies (LLCs), which were created in response to the financial crisis; $2.1 billion in interest income from credit extended to American International Group, Inc.; $1.3 billion of dividends on preferred interests in AIA Aurora LLC and ALICO Holdings LLC; and $0.8 billion in interest income on loans extended under the Term Asset-Backed Securities Loan Facility (TALF) and loans to depository institutions. Additional earnings were derived primarily from revenue of $0.6 billion from the provision of priced services to depository institutions. The Reserve Banks had interest expense of $2.7 billion on depository institutions' reserve balances and term deposits. 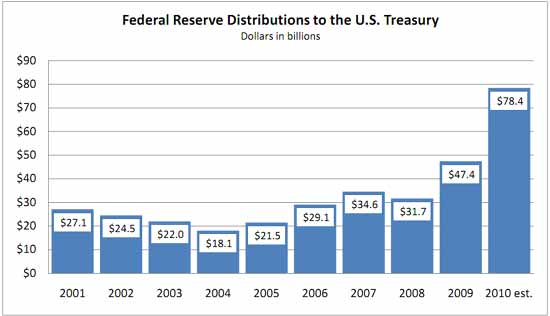 Above is the money returned to the Treasury. What about the fact the Federal Reserve already bought $1.2 trillion in U.S. Treasuries? How exactly does this work? The Fed buys from the Treasury, makes money on interest and pays them by....by cash, buying more Treasuries? These are the very toxic assets of the financial crisis which are listed as generating profits. What happens when the Federal Reserve tries to dump off all of these assets as their exit strategy?

Reuters quips the Federal Reserve is a pauper on paper:

Varadarajan Chari, an economics professor at the University of Minnesota and a consultant to the Minneapolis Fed, says that at some point during its exit from easy monetary policies, the Fed actually may go broke -- at least on paper.

"The most obvious exit strategy is, when inflation starts to pick up, to stop and reverse asset purchases," he said. "That's likely to include requiring the Fed in an accounting sense to see a significant accounting loss."

The Fed now holds just over $1 trillion in Treasuries, Chari noted, and if inflation rose by a couple of percentage points, it would dent the value of those holdings by about 10 percent, leaving the Fed with a $100 billion loss.

"I'm sure it will have some negative political fallout," Chari said. "But not economic consequences. Their ability to print money means it (insolvency) doesn't mean anything."

So while the headline buzz will no doubt be used to say the great Bankster bail out of the financial crisis is now making the taxpayer money, not so fast. Now that the the Federal Reserve is the great investor on toxic assets in chief, what happens when they really try to sell them or go through an audit?

There are huge risks if inflation rears it's ugly head and these U.S. treasuries the Fed bought and then makes some profit on, drop in value.

According to calculations by Reuters Insider credit analyst Ed Rombach two weeks ago, the average duration of the Fed's new portfolio of bonds is just under 5 years, and every 1-basis-point rise in 5-year to 6-year Treasury yields results in a loss of about $65 million.

The Fed is sitting on paper losses of about $2.3 billion on the purchases of U.S. Treasuries it made from November 12 until late last week, according to an analysis by Reuters Insider.

The Fed is also vulnerable to losses through its so-called Maiden Lane portfolios, a collection of investments it acquired when it brokered J.P. Morgan Chase's takeover of a floundering Bear Stearns and bailed out failed insurer AIG.

The portfolio will likely generate losses, according to many analysts. Still, the total Maiden Lane portfolio amounts to just $66 billion, a small slice of the Fed's growing pie of securities.