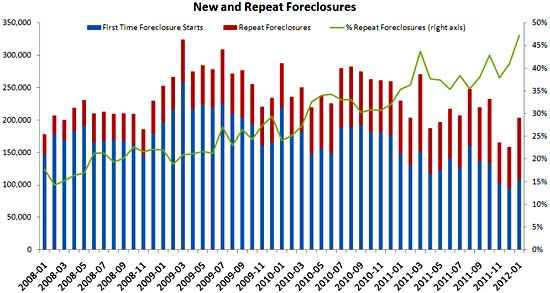 Foreclosure inventory is now 4.15% of total active mortgages and delinquencies are 7.97%.

Those pesky judicial states, in other words, states where the court has to approve the foreclosure process, still have large backlogs, but clearly the pipeline is moving.

The below Lender Processing Services press release gives the below January 2012 mortgage foreclosure and delinquency statistics. This equates to 50.217 million loans outstanding. These are first liens, i.e one loan = one property.

According to David Greenlaw, Economist at Morgan Stanley, there are 55 million homeowners with a mortgage and the breakdown for those underwater is 22%. When calculating the number of mortgages underwater, coming from CoreLogic, the total number of properties attached to residential real estate related loans becomes 48.6 million.

LPS Applied Analytics has more graphs and analysis at this link.