Tonight's video is a talk from ITIF on manufacturing and productivity. We covered some of the details amplified earlier in this multifactor productivity post.

You might want to follow along by downloading their report, Worse Than the Great Depression: What the Experts Are Missing About American Manufacturing Decline. The graphs used in the video are very difficult to make out, but the same as the paper and multimedia link.

Manufacturing Jobs as a Ratio of January 2000 Levels 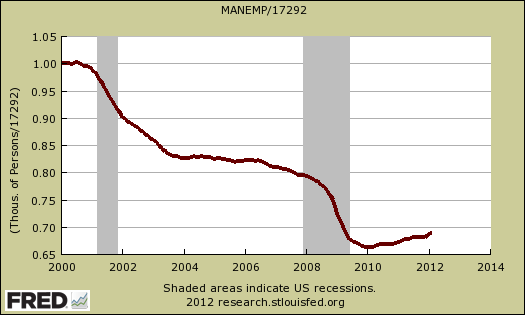 We watched the above talks in detail, looking for informational and data flaws. The above talk and data looks solid and this is very important research. Understanding what the hell is really going on with globalization, outsourcing, manufacturing and overall economic growth is key critical to planning strategy.

The reason we doubled checked this research is the ITIF promotes more H-1B foreign guest worker Visas! We know there is no tech worker shortage, none. The ITIF references flawed studies to promote more Visas. Not only is there no STEM labor shortage in the United States, the industry is notorious for age discrimination, race discrimination and sex discrimination and of course lobbying for more foreign guest workers through fictional economic spin known as corporate sponsored white papers. One woman engineer described STEM R&D as like walking into a 1950's time warp. Why would the ITIF promote more U.S. STEM labor arbitrage and worker displacement? We're not sure but it might have something to do with ties to the DLC branch of the Democratic party or because the topic is so front loaded and full of misinformation, maybe they just are not aware. That said, one thing the ITIF also endorses is changing the foreign guest worker Visa issuance from first come first served to an auction where the highest bids obtain the Visas. This in fact is a policy change that could help stop use of foreign guest worker Visas for labor arbitrage. It's not everything, but something.

With this disclaimer said, one needs to ignore all comments about U.S. skilled labor, talent, STEM from these guys. That said, don't throw the baby out with the bathwater. The above ITIF talk has been Economic Populist ratified and has some great manufacturing and productivity analysis, including Q&A from the audience.

I loved this FNM! But it does raise questions ...

The second speaker, who followed Atkinson, brings up the point that economic measurements are still nation-based. He (second speaker) goes on to explain that the "data and narrative" we have been relying on is "just not right" -- because we should be measuring (and narrating) the global economy, not the national economy. I find a certain cognitive dissonance here between the idea that national economic numbers are beside the point and Atkinson's urging a fight against systemic neo-mercantilism ... but maybe I have the wrong impression of what it means to 'fight systemic neo-mercantilism'.

I suggest that cognitive dissonance between ITIF's support for outsourcing versus ITIF's support for domestic manufacturing is an expression of the underlying contradictions of the WTO world-system -- especially respecting national democracies (and those represent, after all, the only democracy that may possibly exist in the world today).

In short, these guys are corporatist globalists grappling with the fundamental tension or contradiction between the necessity for democratic institutions to control the destructive tendencies of global corporatism versus structural limitations  of the existing WTO world system. That world system, lest we forget, was promulgated on the premise that nation-states would "wither away" under the dictatorship of the corporations -- not unlike the Marxists of old (also globalists) who confidently predicted the same thing, but under the dictatorship of the international proletariat!

I found this going backwards. As you are aware, I often overview the BLS labor productivity, international capital flying around the globe from domestic MNCs, pick the GDP report apart to the point I probably turn off most of the audience here and so on.

Well, I've had real trouble with productivity reports in particular as well as implicit price deflators. So, I was looking around the Internets and came across this research and lo behold found some meaty work.

I've been saying for some time if people want more accurate government statistics they should write their Congress reps to get more funding and also require additional data points, a huge one which doesn't jive with Dem party leadership is immigration status of workers.

Well, one of the points in Q&A is about the BLS/BEA data metrics, these very issues and the lack of funding additionally to add more granularity to the stats.

Well, bottom line, their work jives with what I've dug up myself, so I wanted to amplify this. Something is simply "wrong with this picture" to see a $300B trade deficit with China alone (yearly), 33% of jobs lost in manufacturing when the overall population has grown by ?? 14% or something like that, wages repressed, income repressed, labor participation rates for ages 25-54 plummet, lost manufacturing raw capacity...an Indian BPO industry that's something like 9% of their GDP and the list goes on and on, yet magically, none of this shows up in the GDI/GDP/productivity/international capital flows stats?

But bottom line this work, just focusing on this, looks solid. The rest of what these cats do, well, I don't know I'm just not that familiar but I can give this word of caution. I cherry pick and read each paper, each result and take it piecemeal. I have to. Case in point Heritage foundation has some great, accurate work on Chinese currency manipulation. If you want to read some pure fiction, read their agenda on Medicare as an example.

You know here at EP we ain't into putting up no damn economic fiction spin just cause some corporate lobbyists or lobbyist front group wants it so. We ain't into that corporate, political, philosophical agenda those cats pay the big bucks for. ;)

BTW: when I suggest that "cognitive dissonance between ITIF's support for outsourcing versus ITIF's support for domestic manufacturing is an expression of the underlying contradictions of the WTO world-system," I don't have such a huge ego as to suppose that I know some great secret that the ITIF guys do not know. But, like everyone, they may very well have blind spots or biases in the world views through which they perceive reality.

The major bias of ITIF, and also World Bank and many others, is easily seen in their avoidance of the word "protectionism" (unless used pejoratively). By contrast, what EP promotes is employment for Americans -- policies deliberately targeting that goal. But the objective of employment for Americans in America lies squarely within the heart and soul of the protectionist approach to political economics.

These ITIF guys would run from the room if caught on camera advocating anything like protectionism or anything related to the word 'protectionist'. That would spell the end of their pending grant proposals! But, why would anyone be opposed to protectionism? -- especially in a country with a defense budget like ours?

When Atkinson urges "Fight systemic neo-mercantilism," he could say that he is seeking a more pure globalism, not advocating protectionism. The problem is that there's no separating mercantilism and protectionism!

What Clausewitz actually said was this --

"War is not an independent phenomenon, but the continuation of politics by different means." -- Karl von Clausewitz

It's past time for politicians, think-tankers, MSM and the working people of America to acknowledge that reality. Tell it like it is! In plain old English!