From the paper Current Account Imbalances are Coming Back:

Based on these statistical results and on policy plans that have been announced to date, current account imbalances are likely to return to record levels over the next five years. This conclusion supports the view that the recent narrowing of imbalances was almost entirely a result of the global recession and that global recovery will unwind this effect. Indeed, recent data suggest that IMF projections for current accounts in 2010 understate the likely imbalances last year in some of the largest G-20 economies.

As it is, the trade deficit literally wipes out GDP growth. In the Q3 2010 report, imports, which subtract from gross domestic product, reduced the final GDP growth by half.

Gagnon's research finds fiscal deficits, yes that deficit, increases global imbalances by 20-30%, while currency manipulation, causes a 40-50% increase in current account balances for emerging economies. Fiscal deficits previously were thought to affect economic growth by 10-20%. So, that's developing, or emerging economies increasing their current accounts by up to half through the purchase of foreign assets.

In his paper Garnon refers to current accounts. That's just the amount of goods, services, income and transfers into the U.S. and out. It's like the U.S. has a gigantic bookkeeper, the BEA, and there are three different categories on their master spreadsheet, current accounts, capital accounts & financial accounts. All of this is done under BOP, or balance of payments or international transactions.

The current account tends to increase by 40 to 50 percent of any increase in net official financial outflows (including reserve accumulation), and the effect may be even larger in some developing economies.

Translation & Interpretation: China's currency manipulation is hurting the U.S. economy more than the budget deficit for China is 72.4% of the non-oil goods trade deficit.

External financial policies are the most important drivers of current account imbalances in developing economies, but they are not significant drivers in advanced economies. These policies include, for example, preventing exchange rate appreciation after positive shocks to net exports by sterilized intervention in foreign exchange markets. Such policies enable current accounts to remain positive indefinitely because they shut off the normal adjustment channel of real exchange rate appreciation. These policies are more common in developing economies than in advanced economies, in part because greater capital mobility in advanced economies makes sterilized intervention less effective.

All of this is based on a statistical model to account for currency exchange rates and net financial flows or where money and financial assets are flying around the globe.

What he is talking about is when China buys up U.S. Treasuries to avoid having excess U.S. dollars, which they got from selling their exports in the United States. Normally, when receiving U.S. dollars and needing to exchange them for the home country, or domestic currency, those dollars go out into the open foreign exchange market. China must "exchange" those U.S. dollars back into Yuan. Aha! Instead of exchanging them completely, in an international foreign exchange system, floating, China only exchanges a partial amount. This is done by pegging the Yuan or fixing it to an artificially predetermined ratio to the U.S. dollar. This is called a fixed, or pegged currency exchange rate. Now, China goes out and buys up a bunch of U.S. Treasuries and other foreign assets, reserves, to make up the difference between what they exchanged of Dollars to Renminbi, with what is left over, or excess dollars they couldn't exchange for their currency without raising the U.S. dollars to Yuan ratio. This is what China does with the rest of the loot to make up the difference, buy up foreign assets and cash separately. It isn't just China playing this currency peg game, a host of other developing nations are doing the same thing. By refusing to float the Yuan, aka Renminbi, aka CNY, China now has a record $2.85 trillion in foreign currency reserves, that's cash and things like U.S. Treasuries as well as the world's largest money supply at the highest M2 growth rate. From last October, China's U.S. Treasury holdings were $906.3 billion dollars. Remember Treasuries means buying U.S. debt.

Cutting to the chase of Gagnon's research is the below table, which is the projected changes to each nation's current accounts given the same scenarios (nothing much changes) from before the financial crisis and recession. The first column is the current account balances to GDP ratios that was run during 2004-2008. Column 2 is the IMF projections for an increase or decrease for that ratio in 2011-2015 for each country. Column 3 shows the results from Gagnon's model in contrast to column 2, the IMF's projected change. In other words, the United States trade deficit and thus reduced GDP is going to get worse not better for 2011-2015 in comparison to 2004-2008. See that difference between the IMF forecasts and his model? That means for the United States the trade deficit, and odds on economic growth is going to be much worse than pre-recession levels. The other two columns are a couple of different economic models that don't take into account external financial policies (such as buying a bunch of Treasuries to manipulate one's currency). 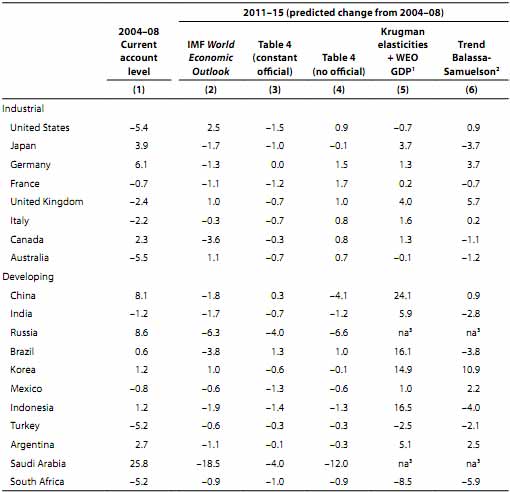 Below are some of the paper's recommendations we've seen over and over again, yet our government does nothing. On this score, the research seems to be quite valid as well as the recommendations.

The two most important policy levers for narrowing global imbalances are fiscal consolidation in deficit economies and a reduction in official financial outflows (sometimes referred to as increased exchange rate flexibility) in surplus economies. To avoid a return of large global imbalances, economies with current account deficits should cut fiscal deficits more than is currently projected and economies with current account surpluses should dramatically reduce official financial outflows and allow their currencies to appreciate as well as take steps to boost domestic demand. Of course, the timing of these actions needs to take into consideration economic conditions in each country. In countries that were hit hard by the financial crisis and in which economic recovery is proceeding slowly, fiscal consolidation should be delayed until recovery is on a firmer footing.

If this research is correct or your friendly neighborhood layman's economics blogger understood it correctly, it has significant implications on China and other EEs (emerging economies) and their relationship to the United States. In other words, we must reduce our deficit and one critical way for that is jobs, income. To get jobs, we need production, manufacturing, the production economy or the real economy and thus exports, to grow. Which means American companies using China as their backyard cheap manufacturing center instead of the United States need to return those jobs. All of that implies we need strong action again China for currency manipulation since they refuse to float the Yuan.

I wrote this after reading about this paper on Economix, a New York Times economics blog. I went through the paper multiple times and beyond realizing I need to get on the case of global financial flows and current accounts in terms of basic theory....I spent a long time chasing around this paper's assumptions and conclusions and couldn't any flaw. I mention that because the Peterson Institute often freaks outs people due to the never ending attacks on social security, workers, labor, any sort of social safety nets. So, consider the messenger versus the message house on this one.

This is true as a general rule, at least for me, when I see something concluding something new, even when it intuitively makes sense, I try to check out the math, EQs and assumptions....that's where you'll find a host of spin in the form of "bad math" or "bad assumptions" or my favorite, setting some major model variable to zero...and so on to make some agenda or philosophy sound like it's actually based in real models and theory.

Spinners love to hide agendas in math and theory because nobody, maybe a colleague who never will be heard....reads those parts.

Anyway, this one looks very good and at minimum got me digging around to understand better financial flows around the globe.

The news talk about it but no one explains how it works at all. Not sure if I get it , makes it clearer why I read China is buying our debt. Didn't get that either.

To prevent us from stopping there eventual take over ov Taiwan.

What's good about this analysis is the point, and I think it gets lost in so many trying to get anywhere on stopping China's currency manipulation, is there are a lot of other factors creating the trade deficit with China.

If you can follow any mathematics, you should try to parse this, plus the above research paper.

I’m a proponent of a proposal to reduce USA’s trade deficit of goods that was first introduced to the Senate in 2006. Trade deficits are always detrimental to a nation’s GDP. Trade deficit’s detriment to GDP exceeds the amount of the deficit itself and the GDP bolsters the median wage.

I believe this simple concept is not simplistic and is worthy of consideration.

This trade policy would decrease USA’s trade deficit of goods and increase the aggregate sum of USA’s imports plus exports. It can be drafted to be completely self funding. It would not require any additional federal spending, taxes or debt.

The proposed version of this trade policy I advocate excludes scarce or rare minerals integral to the goods from their total assessed values. USA’s global net trade balance of such goods affect (in U.S. dollars) upon our GDP is a leverage factor in excess of two.

"This paper considers a plan proposed by Warren Buffett, whereby importers would be required to obtain certificates proportional to the amount of non-oil goods (and possibly also services) they brought into the country."
http://www.levyinstitute.org/publications/?docid=1077