The IMF has released their World Economic Outlook report and projects unemployment will remain unacceptably high in advanced economies as well as the Middle East and North Africa, an area of unrest.  The IMF also warns if the U.S. debt ceiling is not promptly raised, serious damage to the global economy would probably result.  The below graph shows the lowering of GDP estimates globally in comparison to last April's IMF projections. 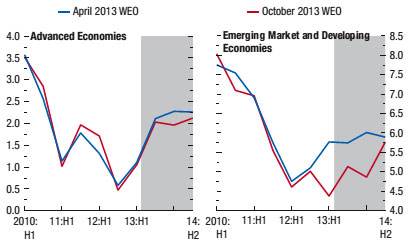 The fiscal deficit reduction under the sequester is excessively rapid and ill designed, and it is expected to subtract between 1½ and 1¾ percentage points from growth in 2013.

The probability of a new recession are low according to the IMF, 10% for the United States.  That said, if the debt ceiling is not raised they predict the result would be a global recession and even worse.

The Federal Reserve tapering their quantitative easing is projected to impact emerging economies around the globe with the taper removing 2.5 percentage points from Turkey's GDP and a quarter of a percentage point from Mexico's.  Much of the reason for slower growth in emerging economies is rising interest rates and commodity prices.  Who knew the Fed was propping up the globe, but for the most part the IMF says advanced economies should weather the storm for the inevitable taper.

The IMF bottom line is tapering, if well timed, is doable, those damn Republicans and their draconian budget cuts are hurting the U.S. economy, the hostage taking of the debt ceiling could lead to a global collapse worse than 2008 on even a partial U.S. default and China needs to start spending their money on their own cheap consumer goods.  In other words business as usual and our politicians, not economic events, are taking the globe to the economic dog house.