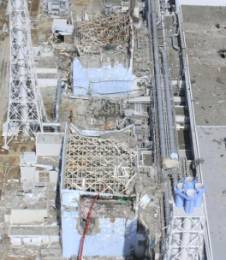 The photograph to the right is one of a series of Fukushima I images obtained through the resources of Cyptome, a open information web site run by one of the original Wikileaks collaborators, John Young. Cryptome credits them to Air Photo Service Co, Ltd. Japan (Image to right) Two sequences of images show damage to the reactors. Sequence 1 covers March 20 - 24, 2011. It contains photographs not previously available. Sequence 2 shows photographs through April 2, many of which have been released. Sequence 1, the new images of Fukushima I, has not been subject to scientific analysis made available to the public. ChrisMartenson.Com made extensive comments. Tyler Durden re-posted the Martenson piece at ZeroHedge. Information is limited concerning the impact of the partial meltdowns at Fukushima, as noted in a previous post on the subject. Measurements critical to understanding the contamination from the plant started on March, 23, according to Japan's chief cabinet minister. What do the photographs in sequence 1 mean? It will be helpful when scientists qualified to provide the analysis start commenting. The New York Times (April 2) published an article on a private meeting of specialists in forensic analysis of nuclear accidents. It's revealing, to say the leasts, and it was not intended to be made public.

Now, as a result of the crisis in Japan, the atomic simulations suggest that the number of serious accidents has suddenly doubled, with three of the reactors at the Fukushima Daiichi complex in some stage of meltdown. Even so, the public authorities have sought to avoid grim technical details that might trigger alarm or even panic.

"They don’t want to go there," said Robert Alvarez, a nuclear expert who, from 1993 to 1999, was a policy adviser to the secretary of energy. "The spin is all about reassurance." New York Times, April 2

"The spin is all about reassurance." Hopefully, the spin will soon be about telling the truth to the Japanese people and a worldwide audience that has a right to know. Japan has is the third largest economy in the world. China and the United States are its two top trading partners. One would think somebody would give us the inside scoop on what all this means? Then again... 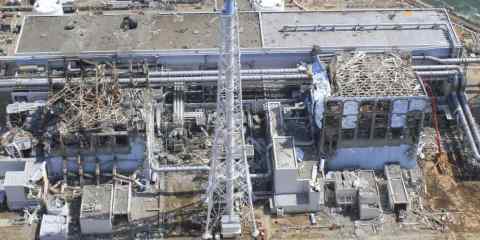 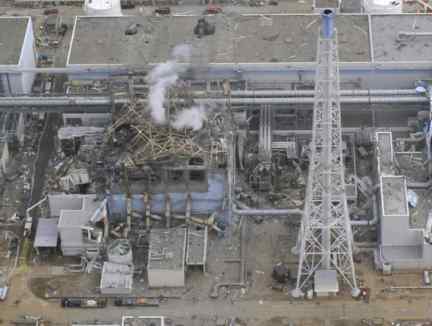 (Croptome caption) In this March 20, 2011 aerial photo taken by a small unmanned drone and released by AIR PHOTO SERVICE, the crippled Fukushima Dai-ichi nuclear power plant are seen in Okumamachi, Fukushima prefecture, northern Japan. From left: Unit 1, partially seen; Unit 2, Unit 3 and Unit 4. (Air Photo Service Co. Ltd., Japan) Cryptome photographs --------------- Thanks to éminence grise to Cherchez la Verite for his update on this at 4/04/2011 07:39:00 AM

TOKYO (AP) — Workers began pumping more than 3 million gallons of contaminated water from Japan's tsunami-ravaged nuclear plant into the Pacific Ocean on Monday, freeing storage space for even more highly radioactive water that has hampered efforts to stabilize the reactors.

It will take about two days to pump most of the less-radioactive water out of the Fukushima Dai-ichi nuclear complex, whose cooling systems were knocked out by the magnitude-9.0 earthquake and tsunami on March 11.

Radioactivity is quickly diluted in the ocean, and government officials said the dump should not affect the safety of seafood in the area.   ...

"This is an industry that's had an extremely safe track record for more than 40 years," [Jeff} Immelt [GE CEO] said. "We have had more than 1,000 engineers working around the clock since the incident began and we will continue in the short, medium and long term working with TEPCO due to this horrific natural disaster."

The magical cleansing power of the sea, it seems, makes this dumping all right.

The GE CEO Immelt has to call this a natural disaster. Here's why.

Three of the six reactors at Fukushima are from GE and two of those that have moved into meltdown are GE.

I kid you not, a fish was found to have 7.5 million times more radiation past the legal limit in Japan.

Such a devastating tragedy, hopefully they get the radioactive water issue under control.