Utilities dropped another -0.1% in October. In September utilities declined -2.0%.  Mining industrial production popped up 2.3% and manufacturing increased 0.5% for September. If one noticed in the trade report, non-monetary gold was 66% of the total U.S. export increase. Total Industrial production is still down -5.3% from pre-recession levels, in other words going on 4 years, even while up 3.9% from October 2010. The Fed also reports capacity utilization, is -2.6 percentage points below the entire 1972-2010 average, but is up 2.1 percentage points from a year earlier. 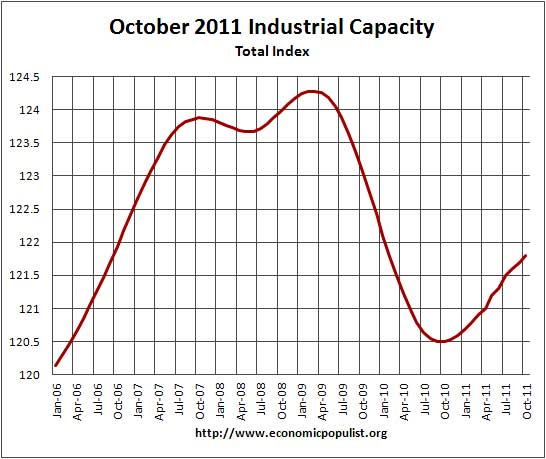 Below is the Fed's description of Market groups from the report and their monthly percent changes. Considering the importance of the auto industry, what happens to manufacturing when the South Korean Trade Agreement kicks in will be interesting to watch. It is projected to flood the U.S. market with Korean autos, parts, resulting in 25,000 U.S. auto industry related jobs lost. Automotive products increased 3.9% for October and are up 12.6% since last year.

The production of defense and space equipment increased 0.9 percent in October after having edged down 0.1 percent in September.

The index for construction supplies was up 0.1 percent in October and was little changed, on net, over the past three months. The output of business supplies slipped 0.1 percent in October, its third consecutive monthly decline. The decreases over recent months primarily reflected lower output of commercial energy products; the output of non-energy business supplies increased slightly in both September and October and edged down in August.

Below is the industrial production graph for construction, in black, where we can see this entire sector is still decimated after the housing bubble burst. Construction supplies increased 0.1% this month and are up 4.0% since October 2010. 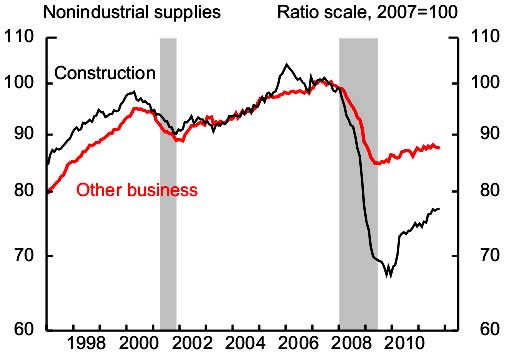 That said, mining is on fire it seems. Mining capacity utilization is now 5.3 percentage points above it's long term average to 92.7% percent for October 2011. One of the more interesting graphs is high technology capacity utilization, shown below. These high tech sectors seems to correlate to when the high tech industry offshore outsourced in droves to China and communications equipment is one area that is being offshore outsourced.. High Technologies capacity utilization keeps dropping and this month was another -1.0 percentage point change. 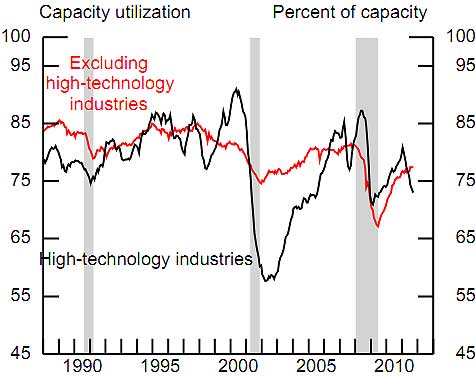