Industrial production was unchanged in April after having increased 0.7 percent in March. Output in February is now estimated to have declined 0.3 percent; previously it was reported to have edged up 0.1 percent. In April, manufacturing production fell 0.4 percent after rising for nine consecutive months. Total motor vehicle assemblies dropped from an annual rate of 9.0 million units in March to 7.9 million units in April, mainly because of parts shortages that resulted from the earthquake in Japan. Excluding motor vehicles and parts, factory production rose 0.2 percent in April. The output of mines advanced 0.8 percent, while the output of utilities increased 1.7 percent. At 93.1 percent of its 2007 average, total industrial production was 5.0 percent above its year-earlier level. The rate of capacity utilization for total industry edged down 0.1 percentage point to 76.9 percent, a rate 3.5 percentage points below its average from 1972 to 2010.

Below is the graph of raw capacity, indexed against 2007 output. This is just how much capacity does the U.S. have to make stuff. Look at how total capacity has declined for the first time in the historical data. This index represents the raw facilities, potential to make stuff. Raw capacity is the underlying number by which utilization is calculated. 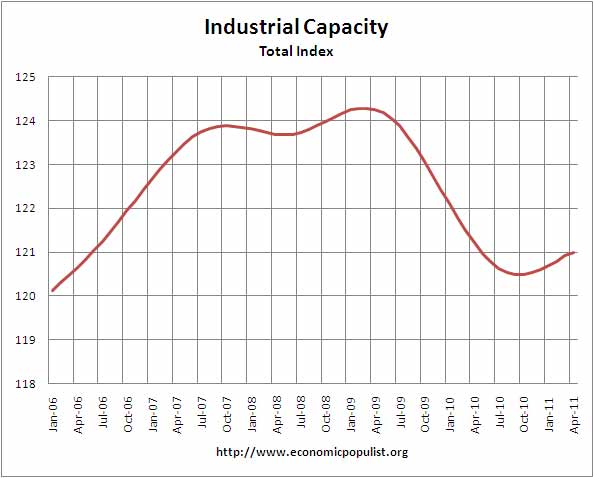 Below is the Fed's description of Market groups from the report and their monthly percent changes. Consumer durable goods had a dramatic drop as did automotive, 7%. Overall the report shows a slowing of output, in line with other economic indicators and reports. We also are finally seeing the effects of the Japan disaster on global supply chain.

The production index for defense and space equipment was unchanged in April after decreasing 0.3 percent in the previous month. Output in April was 1.4 percent above its year-earlier level. Capacity utilization, or of raw capacity, how much is being used, for total industry is now 76.9%. But the Fed notes this is 3.5 percentage points below the average from 1972 to 2010, 80.4%. Manufacturing capacity utilization is down 0.6% for the year.