The Federal Reserve's Factory Production report shows a -0.1% decrease, for January 2011 in Industrial Production. Here is their detailed report. December had a 1.2% increase in industrial production, revised. Industrial Production is still below pre-recession levels, although up 5.2% from a year ago.

At 95.1 percent of its 2007 average, total industrial production in January was 5.2 percent above its level of a year earlier

The reason the numbers were not as strong as December was utilities, or energy. Think heating, oil and the weather. Utilities fell -1.6% for January. Seems those extreme cold temperatures during the blizzard did not a month make. Manufacturing, on the other hand, rose 0.3% for January and had a revised December increase of 0.9%.

Below is the graph of raw capacity, indexed against 2007 output. This is just how much capacity does the U.S. have to make stuff. Look at how damn flat this is in terms of just raw facilities, potential to make stuff. Raw capacity is the underlying number by which utilization is calculated. 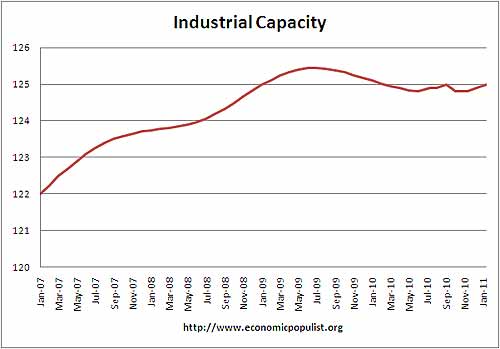 Below is the Federal Reserve graph for raw capacity and Industrial Production. Notice how at the start of 2000, when the China PNTR (trade agreement) kicked in, both literally level off to flat land. When I see this graph I think what has happened to American's industries is an absolute crime. Total capacity growth has been zero for the past year, with mining increasing 0.3% and utilities increasing 1.5%. 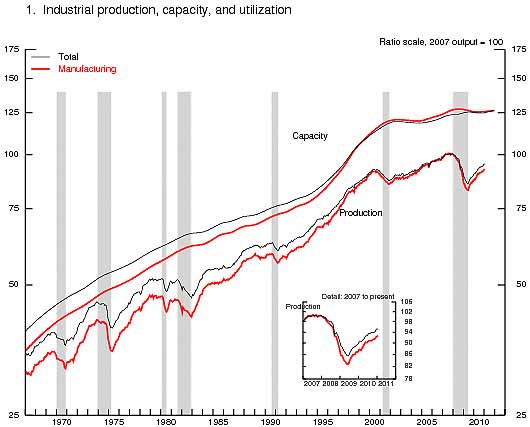 Below is the description of Market groups from the report and their monthly percent change. Notice Durables is doing well and check out automotive products, a 3.0% monthly increase.

The production of defense and space equipment moved up 1.2 percent in January after having declined, on balance, over the previous four months.

Within nonindustrial supplies, the output of construction supplies fell 0.2 percent in January, but it was 7.2 percent above its year-earlier level. The production of business supplies declined 0.3 percent; a decrease in the output of commercial energy products more than accounted for the loss. Capacity utilization, or of raw capacity, how much is being used, for total industry is now 76.1%. But the Fed notes this is 4.4 percentage poitns below the average from 1972 to 2010. That said, the Federal Reserve is giving some pretty impressive growth projections for capacity over the next year: