The Federal Reserve's Factory Production report shows a measly 0.2% increase for June 2011 Industrial Production, otherwise known as output for factories and mines. May was revised downward to -0.1%. Manufacturing industrial production flat lined with no change and Japan supply disruptions are to blame according to the Fed. Autos & Parts did drop -2.0% in June, yet generally the market and industry group monthly changes were a mixed bag. Industrial production is still down -6.9% from pre-recession levels, in other words going on 4 years, even while up 3.4% from June 2010. Here is the Federal Reserve's detailed report. Below is the graph of raw capacity, indexed against 2007 output. This is just how much capacity does the U.S. have to make stuff. Look at how total capacity has declined for the first time in the historical data. This index represents the raw facilities, potential to make stuff. Raw capacity is the underlying number by which utilization is calculated. This month capacity increased +0.2. We are on the increase, but still below pre-recession levels. 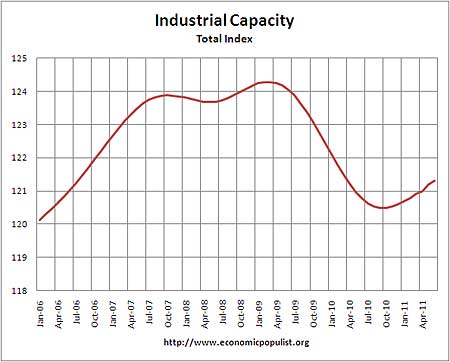 Production recorded a mix of gains and losses across the major market groups in June. Output for the second quarter as a whole moved up in most of the major market groups, although the production of consumer goods decreased at an annual rate of 1.2 percent. Declines in the output of consumer goods occurred for both durables and nondurables. In June, the production of consumer goods was unchanged, with a decline of 0.5 percent in durables offsetting an increase of 0.2 percent in nondurables. Among consumer durables, lower production of automotive products; appliances, furniture, and carpeting; and miscellaneous goods more than offset a small gain in home electronics. Within consumer nondurables, the output of non-energy nondurables was unchanged; increased output of chemical products was offset by declines elsewhere. The index for consumer energy products moved up 0.8 percent, with gains in the indexes for fuels and for residential utilities.

In June, the index for defense and space equipment decreased 1.4 percent after having registered gains in each of the previous five months.

The output of construction supplies increased for the fourth consecutive month in June and climbed at an annual rate of 6.4 percent in the second quarter. The production of business supplies rose in June after having declined in both April and May and was little changed for the second quarter as a whole.

Below is the industrial production graph for construction, in black, and we can see this entire sector has been decimated. 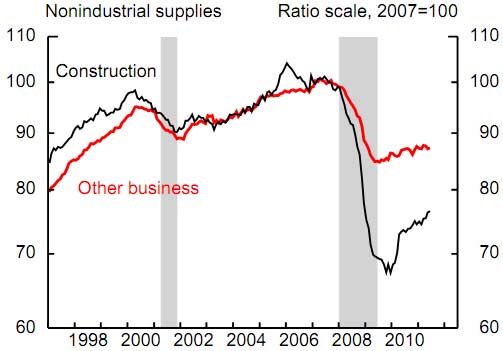 One of the more interesting graphs is high tech capacity utilization, a special aggregate, shown below. It seems to correlate to when the high tech industry offshore outsourced in droves to China and notice the recent declines. Industrial production also shows declines in U.S. communications equipment manufacturing, which is -1.4 percentage points below it's February rate. 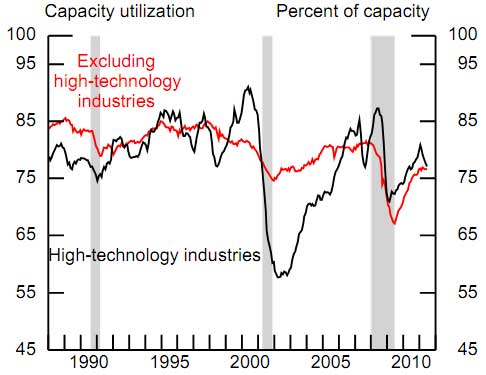