Many commentators that take comfort in the fact that overall job losses in the last six months are not as severe as in most recessions. But they ignore the dramatic structural changes in the jobs and product markets as well as the massive, on-going public and private debt stimulus that sustains health care, education, restaurants and bars, and various forms of homeland security and national defense.

The Manufacturing sector lost another -26k jobs in May, has lost -341k jobs yr/yr, now has the fewest jobs since 1950 and fewer jobs than in May 1942 – five months after the attack on Pearl Harbor. Total US Manufacturing production continues to fall $1.2 billion per day behind US investment and consumption needs while the overall US global production shortfall (and forced borrowing in the midst of the debt crisis) remains almost $2 billion per day.

Job losses in the Manufacturing sector may worsen in coming months as a gain of 7k jobs in autos and other transportation equipment makers in May seem certain to be reversed with large job losses over the coming months.

Average (not median) hourly and weekly wages inched up by only 0.28% in May, far less than the expected 0.50% jump in prices paid by workers and consumers (CPI-W and CPI-U.) The BLS will report these May price increases next Friday the 13th. The on-going loss in jobs and real wages is an ominous indicator for household facing record debt and debt service obligations even as the value of their major asset (their home) continues to decline.

May marks the 78th month – 6 ½ years – since the start of the cyclical economic recovery in November 2001. Over this period total private sector hours worked rose only 6.57%, by far the weakest on records that start in 1964 and almost certainly the weakest 78 months of cyclical upturn since 1927-1934 – a period that includes the Great Depression. Over the past 6 ½ years the Manufacturing sector has actually suffered a LOSS of -10.5% in total hours, again, the worst on record and likely the worst since 1927-1934. During this period, despite strong productivity growth, the US has suffered a shortfall of Manufacturing production – a Manufacturing trade deficit – of -$2.5 Trillion.

Today’s BLS report is more evidence that despite massive public and private debt stimulus (including the recent “rebate” checks) the US economy is in deep trouble that more debt may not remedy, even in the short term. The BLS report also again shows the utter foolishness of anyone who pays the least attention to the private, so-called “ADP National Employment Report” – which astonishingly moved markets again this week. Of the countless forecasts available, the ADP guess is consistently the worst, consistently over-estimating private job growth. 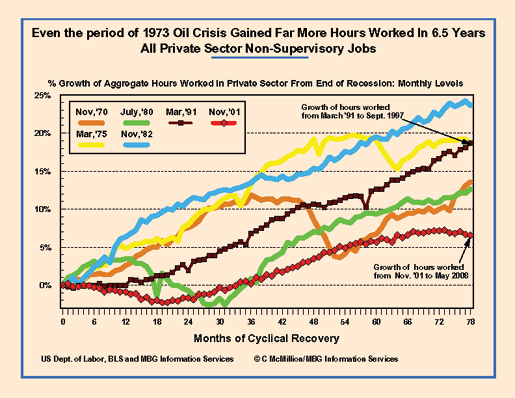 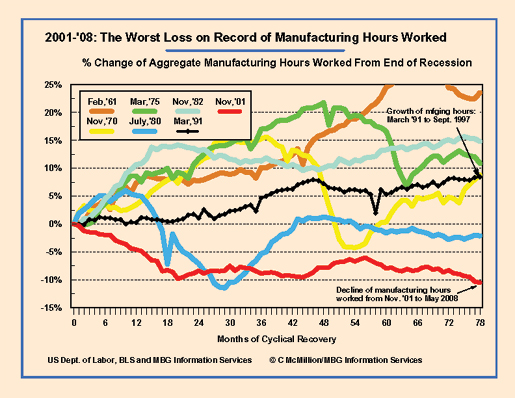 Today on the radio, I heard GM and bankruptcy in the same sentence. We have stupid americans, Reagan, Greenspan and Bill Clinton to thank for the whole freaking mess this country is in. I wouldn't vote for a Clinton or a Republican if I was paid.

and you missed Bush I, II on your list. But, the key is not to focus in on a President or even party but on the policies and deals going on behind the scenes. Write your congress representative on it. It's also the businesses fault in that a company like GM just thought about profits through much of this instead of enabling innovation and long term strategy. They thought more short term. In the case of cars/trucks, bad trade policy also has a lot to do with this.

Many factors have caused the decline of the US Auto industry. The root causes are bad trade and economic policy. However bad management decisions such as Robert points out putting short term profit ahead of long term investment in new technologies and efficiencies play a very significant role - and this thinking is facilitated by those bad economic and trade policies. Japanese automakers thing in terms of the long term - they have a word for it - kaizen (continuous improvement) Detroit also failed to learn the lessons of the 1970s with the oil embargos - they are caught once again with ugly, poor qaulity gas guzzlers no one wants. Again getting back to the short term thinking - beating up vendors for "cost downs" forced them to cut corners on materials or offshore - reducing quality and discouraging innovation.

What puzzles me is that despite major wage and benefit concessions by labor, plant closures, headcount reductions and increased outsourced content the US makers continue to struggle - could it be that these MBA strategies of cut costs and maxed profits do not really work after all?

A prime example is Ford - for much of the 90s they had the number one or number two selling vehicles in nearly every category - Taurus, Escort, Explorer, Ranger, F series so forth, and for a time were actually knocking on GM's door for the number one spot - yet they failed to keep up with the styles and technologies and rested on theiur larels - they even made the brilliant move of killing off the Taurus one of the most successful vehicle platforms of all time - theres that short term thinking again.

The AM radio blowhards cvontinue to spout the tired old meme that it is the unions fault for detroits woes - yet labor does not make the decisions on marketing, design, quality, product rationalization, technology - And when the unions were stronger and pre Reagan era US automakers totally dominated the globe.

Could it be the whole "supply side" ideology simply does not work?

Where are the Henry Fords that understood the demand side of the equation?

Great comment! A blog post on how Japan trade strategy as well as business culture is better than America's, going into the details is something I would like to read about if you want to go into more analysis in a blog post.