Moody's downgraded 15 banks, primarily because banks are busy placing bets in the great capital markets gambling casino. As a result of these downgrades, banks borrowing costs will increase and they will have to pony up more collateral to cover their holdings and trades. Below is a chart the new credit ratings and additional collateral costs banks reported in their 1st quarter financial statements. Moody's originally warned about bank credit ratings downgrades in February. 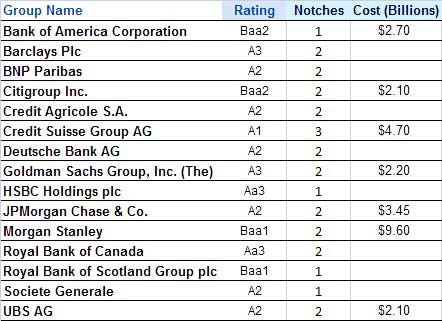 All of the banks affected by today’s actions have significant exposure to the volatility and risk of outsized losses inherent to capital-markets activities,

Capital markets are, in part, long term debt instruments. In other words, exposure to sovereign debt, specifically European sovereign debt. Moody's gave reasons for each individual bank downgrade. For example, BoA's mortgage exposure was cited as well as their litigation costs. Why, we have no idea, since any civil action has resulted in BoA getting away with murder. Credit Agricole, on the other hand, has heavy Greek debt exposure. That said, with almost every bank downgrade comes the mention of risky activities, inability to reduce risk, challenging risk culture and large percentages of their quarterly profits due to risky global capital market investments. In other words, the great derivative gambling casino finally caused a few downgrades. Below is the sweeping overview from Moody's with the details for individual banks at this link.

The first group of firms includes HSBC, Royal Bank of Canada and JPMorgan. Capital markets operations (and the associated risks) are significant for these firms. However, these institutions have stronger buffers, or 'shock absorbers,' than many of their peers in the form of earnings from other, generally more stable businesses. This, combined with their risk management through the financial crisis, has resulted in lower earnings volatility. Capital and structural liquidity are sound for this group, and their direct exposure to stressed European sovereigns and financial institutions is contained.

Firms in this group now have standalone credit assessments of a3 or better (on a scale from aaa, highest, to c, lowest). Their main operating companies now have deposit ratings of Aa3, and their holding companies, where they exist, have senior debt ratings between Aa3 and A2. Their short-term ratings are Prime-1 at both the operating and holding company level.

Other factors contribute to the relative positioning. For example, Barclays, BNP Paribas and Groupe Credit Agricole have, to varying degrees, relatively robust shock absorbers. Exposure to capital markets businesses is very high for Goldman Sachs, but this is balanced by a record of effective risk management. Barclays, BNP Paribas, Groupe Credit Agricole, and Deutsche Bank also have sizeable but varying degrees of exposure to weaker European economies. Some firms are relatively weak with regard to structural liquidity or reliance on wholesale funding.

The third group of firms includes Bank of America, Citigroup, Morgan Stanley, and Royal Bank of Scotland. The capital markets franchises of many of these firms have been affected by problems in risk management or have a history of high volatility, while their shock absorbers are in some cases thinner or less reliable than those of higher-rated peers. Most of the firms in this group have undertaken considerable changes to their risk management or business models, as required to limit the risks from their capital markets activities. Some are implementing business strategy changes intended to increase earnings from more stable activities. These transformations are ongoing and their success has yet to be tested. In addition, these firms may face remaining risks from run-off legacy or acquired portfolios, or from noteworthy exposure to the euro area debt crisis.

Then, the IMF issued a warning that the European Financial Crisis has reached critical stage:

The euro area crisis has reached a critical stage. Despite extraordinary policy actions, bank and sovereign markets in many parts of the euro area remain under acute stress, raising questions about the viability of the monetary union itself. A determined and forceful move toward a more complete EMU, particularly a banking union and more fiscal integration, is needed to arrest the decline in confidence engulfing the region.

The IMF has laid out various reasons for the problem, and reiterates a move to a banking union and fiscal consolidation. Yet one thing demanded by the IMF stood out. The IMF claims Europe must lower unit labor costs. Great, huh, squeeze workers under this lie of being competitive.

With that, below is a Bloomberg Law interview with Greece's attorney Lee Buchheit. Buchheit is on the front lines of the European debt crisis. He navigated and negotiated Greek's investor hair cut and restructuring deal. Buchheit is predicting Europe will need yet another €1 trillion and Cyprus is the next nation up for a bail out. This interview has a lot of insight, from a veteran expert's view returning home from the ongoing debt war.

Capital controls are financial speak to stop the bank runs going on in some of the imploding European nations.

Given this news, should't we be at DEFCON 2 or 1 like 2007 already? I mean Dick Bove, master bankster shill on CNBS and Bloomberg, was busy saying Moody's was bad for doing this and banks were still awesome (just like he's been saying since 2007, same with Kudlow, etc.). Bloomberg etc. were shrieking last night. But bank stocks went UP today?! Really? It's like when Bloomberg runs headlines at the bottom saying "China's economy slowing down," but then says "China's economy picking up," or "gold seen falling on imminent deflation" and then the next "gold seen rising on imminent inflation." Complete joke, even the media doesn't know how to play these blatant manipulations. Sure, banks have no $, will be crushed by trillions in derivatives - why not shoot up 50000%. Well, when things are good, thing are good for banksters and CEOs, and when things are really, really, really bad, it's also good because the Feds and Eurocrats have to goose the markets up. Heads they win, tails they win, we lose every time.

Right, you get these stock hype "articles" daily with no basis in data reality. "Market rises on oil supply concerns, market falls on Buffet comments"...they are issued every 15 minutes and to me it's some serious trader noise. If investors really base trades on those headlines, to me, they are out of their mind.

That said, supposedly one of the reasons stocks are up is because Morgan Stanley should be been the maximum downgrade, 3 notches and instead was only 2. In other words, due to the February warnings, the market had it "priced in" than the downgrades would be much worse.

That said, these downgrades to me are really telling. Moody's is telling us the Banks are at it again, nothing has changed. In spite of a global economic collapse, meltdown, they are still making massive risky derivatives bets, which have contagion written throughout.

It's unbelievable the larger economics awareness people didn't go really reading Moody's comments. This time, I think a credit ratings agency is doing something right, yes a rarity, but that's a serious warning to me.

This goes right along with Moody's downgrades for the same reasons and Moody's mentions "government support" in their ratings rationale.

The BIS has released a report stating banks are doing the same risky, derivatives types of trades that caused the financial crisis and fully expect taxpayers to bail them out if things go bad.

Damn, who would have thought, crack addicted gamblers that own the pit bosses and casino management and law enforcement won't give up crack or gambling? Especially when people who don't use crack or gamble have to finance the gamblers when they lose and don't get to share in any of their winnings? Who thinks the gamblers will ever give up their actions . . . EVER? Why would they, no repercussions, no rebukes, no prison, and the casino and enforcers are completely owned by crackheads while those who never stepped foot in a casino ever are forced to fund their drugs, gambling, and whores against their will. And to top it off - the upstanding non-gamblers are called lazy idiots and unemployed scum by the crackhead gamblers and casino management (actually, casino management does criticize the American public on MSM and praise the crackhead banksters). It's good to be a crack-addicted moron gambler - "best and brightest" - oh absolutely, "best and brightest."
The comparison to the mob is not apt, they wouldn't tolerate degenerate gamblers when they couldn't payoff their own bills, there never was public backing and the enforcers kept these mutts in check. Now, there is no check on these idiots, they own DC and NYC and everywhere else while the citizens that respected the rules deal with the repercussions against their will.
-KURTZ