The Mortgage Monitor for February (pdf) from Black Knight Financial Services (BKFS, formerly LPS) reported that there were 655,311 home mortgages, or 1.30% of all mortgages outstanding, remaining in the foreclosure process at the end of February, which was down from 659,237, which was also 1.30% of all active loans, that were in foreclosure at the end of January, and down from 1.72% of all mortgages that were in foreclosure in February of last year.  These are homeowners who had a foreclosure notice served but whose homes had not yet been seized, and the February "foreclosure inventory" remains at the lowest percentage of homes that were in the foreclosure process since the fall of 2007.   New foreclosure starts, which have been volatile from month to month, rose to 84,305 in February from 71,900 in January and from 77,208 in February a year ago.  That was the highest number of new foreclosures in any month since March 2015, when 92,164 were foreclosed on.  Over the past year, the average of new foreclosure starts monthly remains at a level about one-third higher than the average number of new foreclosures we saw monthly in the precrisis year of 2005...

The first graph below, from page 5 of the Mortgage Monitor, show the mortgage delinquency rate, or the percentage of mortgages at least one mortgage payment overdue but not in foreclosure, at the end of each month since the beginning of 2005.  As noted on the graph, at 4.45%, the national mortgage delinquency rate is now at the lowest its been since April 2007.  That's down by much more than half from January 2010, when 10.57% of all mortgages nationally that weren't yet in foreclosure were behind by at least one house payment.  Before the mortgage crisis, the delinquency rate was generally in a range between 3.75% and 4.25%, with the seasonal highs typically in December... 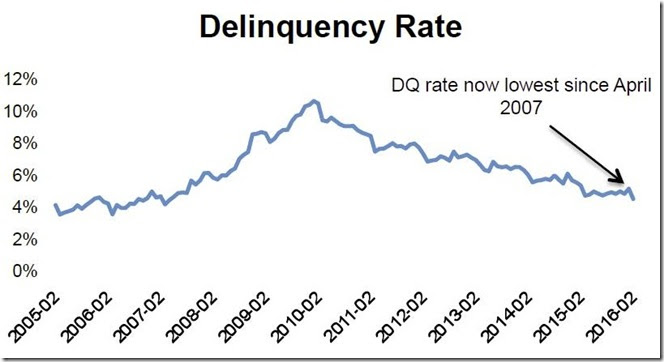 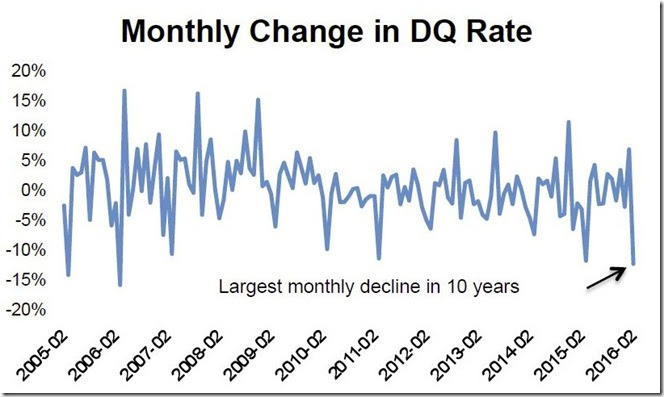 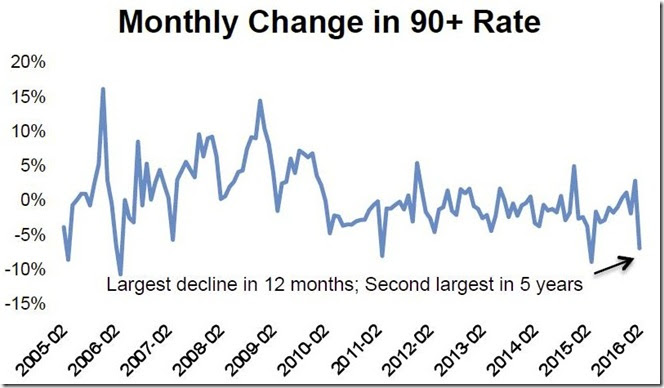 Finally, we're including below that part of the Mortgage Monitor table showing the monthly count of active home mortgage loans and their delinquency status, which comes from the bottom part of page 16 of the pdf, even though the 2015 data has now been cycled off this month (for monthly 2015 data, see here).  The columns in the table below show the total active mortgage loan count nationally for each month shown, number of mortgages that were delinquent by more than 90 days but not yet in foreclosure, the monthly count of those mortgages that are in the foreclosure process (FC), the total non-current mortgages, including those that just missed one or two payments, and then the number of foreclosure starts for each January shown going back to January 2005.  In the last two columns, we see the average length of time that those who have been more than 90 days delinquent have remained in their homes without foreclosure, and then the average number of days those in foreclosure have been stuck in that process because of the lengthy foreclosure pipelines.  The average length of delinquency for those who have been more than 90 days delinquent without foreclosure has fallen from the April 2015 record of 536 days and is now at 489 days, while the average time for those who’ve been in foreclosure without a resolution has increased again and at 1064 days has now topped the record high last set in November.  That means that the average homeowner who is in foreclosure now has been there nearly three years, which, considering that new foreclosure starts are less than 30 days old, suggests that many foreclosures started early in the crisis are still not yet completed. 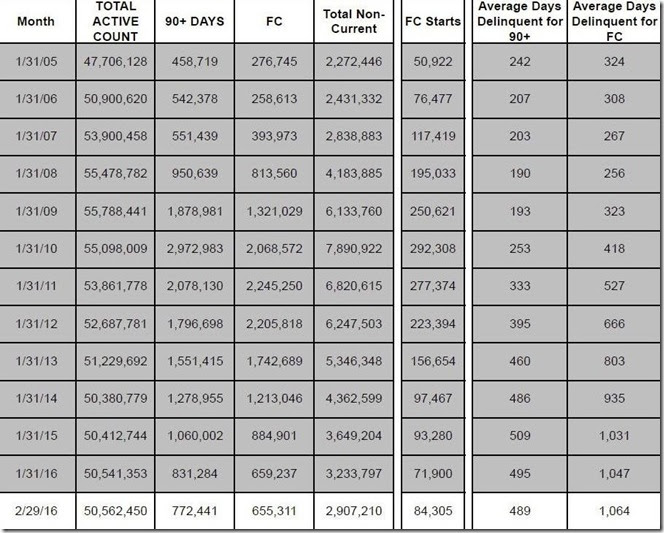 (Note: the above was excerpted from my weekly coverage at Marketwatch 666)