What do you get when you cross Tim Geithner and Peter Peterson?

Barack Obama; who would rather help the big banks and "balance" the budget than offer a helping hand for struggling homeowners. (Image)

The president demonstrated new heights of indifference toward the people in his handling of the mortgage relief program made a part of the Trouble Asset Relief Program (TARP). Citizens paid the full share for TARP and were to get a modest proportion. That's not the case. The November 2010 Congressional Budget Office Report on TARP was just issued. It showed that the funds for home mortgage assistance programs would be reduced from $50 billion to $12 billion, as reported in the Huffington Post.

Reading the details of the report, we find that the take back from homeowner relief through TARP funds is even more outrageous. The actual funds spent so far for homeowner relief is only $710 million.

The remaining $11 billion "additional funds" billion of will not likely materialize. In his October 2007 report the Special Inspector General for TARP, Neal Barofsky, noted that, "HAMP produced a net increase of fewer than 26,000 permanent modifications a month signaling that the anemic pace of permanent modifications may even get worse" The $11 billion "additional funds" will be treated like the previous $50 billion commitment that turned into $11 billion. It is an accounting version of Zeno's Paradox.

In the mean time, AIG got $48 billion and Investment Partnerships another $15 billion, none of which has been paid back. So the score is AIG/Bankers $94 billion - Homeowners $0.71 billion. Quite a deal!

Here are the CBO Report figures on the actual beneficiaries of the mortgage relief programs under TARP. There were 207,000 permanent loan modifications with 28,000 canceled for a net of 179,000 homes saved for citizens. The much publicized trial loan modification program under HAMP had 1.7 million loans enrolled. Forty one percent of these were canceled and another 173,000, 10%, are in "limbo" providing no benefit to homeowners.

"Treasury has steadfastly rejected these recommendations and now finds itself defending a program that is failing to meet TARP's goal of 'preserving home ownership.' As a result, a program that began with much promise now must be counted among those that risk penetrating public anger and mistrust." Neal Barofsky, Special Inspector General Tarp Oct 26

Apparently the President missed this 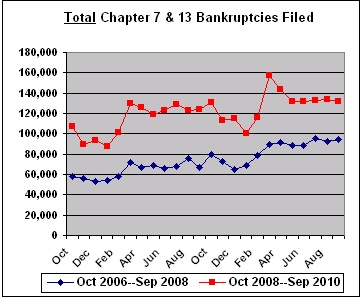 Individual bankruptcies are up significantly. Bankruptcy Data Project The seriousness of the increase is indicated y the graph below which compares 24 month periods before and after the hypothesized October 2008 financial meltdown.

Bankruptcies are approaching 140,000 a month and. Banks foreclosed on two million homes since 2009. But AIG, with several thousand employees has received every cent allocated while just a fraction of the TARP money intended for mortgage programs has materialized.

In addition to total bankruptcy increases, Chapter 13 bankruptcies are barely a third of the total of Chapter 7 and Chapter 13 combined. Chapter 13 offers citizens the chance to retain their homes and other assets. Chapter 7 is simply a surrender of all assets, including the family home.

We've got a dead economy, real unemployment approaching 20%, and no bubbles on the horizon. What's the response?

Give the companies and the people who caused the problem hundreds of billions and the citizens next to nothing. Act like we're in a recovery and the recession is over. And focus on balancing that damn budget by cutting the only truly budget neutral program, the one that pays for itself, Social Security. Start some more wars and create a war on terror side show by irradiating or groping all commercial airline passengers.

Here's the frightening thing. If you think things are bad now, wait until the new crop of Republicans takes over the House. The President of the Tea Party Nation, Judson Phillips, just announced that he favors restricting the vote to property owners only. Of course, there may be problems with that since the people he thinks are property holders are really debt slaves to the big banks, the real property owners.

Another chapter in the great decline brought to you by The Money Party.

This article may be reproduced in part of in whole with attribution of authorship and a link to this article.

This story was buried in the media headlines on the reduction of "TARP costs", whereas the real costs are at the Fed (to be determined on that one), and of course the American people in terms of jobs and their homes, now retirement.

Right now we have pure insanity in Congress and I think you're right, it's only going to get worse. Literally we have a budget cut proposal that is all about screwing the middle class even further, almost identical to the kinds of attacks we're seeing from the "bail outs" in Greece and Ireland.

Then, GOP is blocking everything for their desire on tax cuts for the rich. It's pure insanity trying to claim that's small business. Firstly small business is NET if they are sole prop. That's income! They have already reduced their tax bill from their costs, overhead, employees....self-employment tax is on net, not gross. If a small business is incorporated, it's an entire different tax return.

What's even more amazing is how not even one single cable noise show, including any financial ones, makes these distinctions.

But it's never on target with the crop of leaders we've had for literally decades. Ike warned about the military-industrial complex but he did it on his last day at the job. Thanks Ike. We had a few shining moments with JFK but he never got to fully implement his program. Subsequent wanna-be maximum leaders did a fine job of grabbing undeserved and often unconstitutional powers, which they preferred to use to start wars rather than help the people. We're truly in a state of emergency, not in terms of talented and hard working citizens; there is an abundance. Rather, we're bereft of (s)elected leaders with any connection to the rhythm and needs of the country. I'll say this, The Money Party gets what it pays for -- relentless allegiance to the narrow interests of the very few at the top.

how do they assume that when only $710 billion is spent, that magically $12 billion will be?

Page 4, Table 2 of the CBO Report - For "Mortgage Programs," add "Principal Disbursed" (1 bil, rounded up from .710 Bil) and "Additional funds" (11 bil). $12 billion is a generous figure to use. That's why I cited SIGTARP Barofsky on the "anemic" mortgage relief efforts. The past is the best predictor. I believe my skepticism is justified. They'd rather balance the budget and spend on banks and war than keep people in homes and get jobs going again. It is officially "flagrant disregard."

Worse, nothing has been done about the fee incentives for servicers to NOT do workouts. Diligent analysts have documented that phenomena, but nobody does anything about it.

Hence, the government is backing out big time on the financial assistance for mortgage relief and allowing predatory practices to continue unabated. Flagrant...

WASHINGTON — As Americans continue to lose their homes in record numbers, the Federal Reserve is considering making it much harder for homeowners to stop foreclosures and escape predatory home loans with onerous terms.

The Fed's proposal to amend a 42-year-old provision of the federal Truth in Lending Act has angered labor, civil rights and consumer advocacy groups along with a slew of foreclosure defense attorneys.

They're not only asking the Fed to withdraw the proposal, they also want any future changes to the law to be handled by the new Consumer Financial Protection Bureau, which begins its work next year.

In a letter to the Fed's Board of Governors, dozens of groups that oppose the measure, including the National Consumer Law Center, the NAACP and the Service Employees International Union, say the proposal is bad medicine at the wrong time.

Aren't bankruptcies the ultimate individual bailout? Of course, since the 'reforms' of a few years ago, bankruptcy has become 'less appealing' for high earning wage earners but it is still darn appealing for those 20% who are unemployed or under-employed with no current income to speak of. This option puts the bad debt smack dab in the lap of the mortgage banker who made the loan in the first place. Why is this a bad result? Isn't giving people money to spend in order to avoid foreclosure also a bailout for the bankers? If we tripled the bankruptcy rate, that would get their attention!!!!! Then, when the unemployed are employed again and the house prices have come down too, they can buy the same house for less money (or the bank can just sit on the house if it wants to look at it).
We should never have given any of the rapacious bankers any public money for any purpose. And if insolvent banks had been run negligently or fraudulently, vigorous prosecutions should have resulted. How many prosecutions does anyone recall from the Savings and Loan crisis of two decades ago? That never happened because of the sweetheart relationship that has existed between government and banks since about 1913. The Fed even bails out banks in the Eurozone for heaven's sake.

"We should never have given any of the rapacious bankers any public money for any purpose. And if insolvent banks had been run negligently or fraudulently, vigorous prosecutions should have resulted."

Bankruptcy is one good option, especially Chapter 13 which can preserve one's home.

Another trend to watch is strategic defaults - people with massive negative equity simply walking away from the property. If that catches on in Nevada, California, or Florida, the big negative equity states, it will raise havoc with the banking system (which, as you point out, shouldn't even be around after it failed).

Try to get good data on the indices going back a hundred years....good luck.

Even getting commodity prices is a feat. Wish I still had access to the full on Bloomberg, but alas that is no more. Costs around $30,000 a year, I had it for free.

So here is the project. Search out and upload "Real Data Series" of all sorts, and post them as direct downloads on Hawaii Trading.

First chart / Excel is by me (Courtesy of the Perth Mint). This chart data is down-loadable in Excel at Hawaii Trading. Within 2 months, my goal is to have 25 spreadsheets with valuable data, available for free.

The Excel format is sloppy, it took me 30 minutes to whip it into this shape as they had odd date formatting.
http://oahutrading.blogspot.com/p/real-data-series.html