President Obama released his Fiscal Year 2011 Budget. Fiscal Year begins on October 1. The budget includes $3.8 trillion in spending and projects a $2.6 trillion in revenue for a projected budget deficit of $1.26 trillion. The federal deficit for FY 2010 is projected to be $1.56 trillion.

There is a lot of information to sift through but here are a few highlights:

3) The start of a spending "Freeze" (or "slushie" as Prof. Delong calls it) on non-security discretionary spending.

Some the interesting documents: Summary Tables and List of "Freezes" (pdf files). But for the whole enchilada go to the Office of Management and Budget for the full document. Here are few charts from the budget document:

Have at it but keep in mind federal government is NOT like a household or business.

If there is anything that calls for a complete economic restructuring of this nation's economy, this is it.

I think we should tape their mouths shut next time any of these idiots mentions a tax cut.

Off to try to get better blood pressure medication, which is prompting me to write up a blog post on biased studies sponsored by big pharma on their own pills through bought and paid for universities!

As Prof Krugman points out: A Depressing Budget: 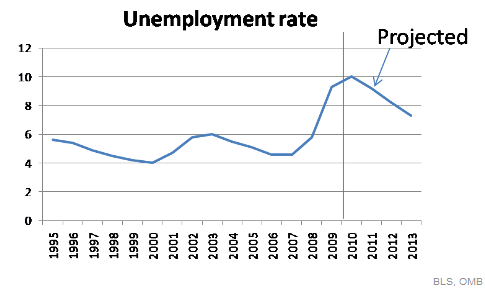 Which begs the question: where is the beef or where's the direct jobs program?

The administration has proven that some (weak ass) government stimulus/fiscal policy can help economy.  Why not go full throttle and eliminate the output gap and unemployment?  Private sector is not capable of doing it.

There is a host of things, cost free, this government could do right now to generate job growth as well a domestic demand....and they will not.

One of them is to stop offshore outsourcing federal and state contracts.

Another to be frank is to put a freeze on at least all guest worker Visas and to curtail even all sorts of immigration (legal and illegal). Hate to say it but if the obvious here in that 1 of 6 Americans are out looking for a job...

well, obviously adding over 1 million in LPR plus ~ 300k plus in guest workers and an unknown number of illegals into the labor pool....

well, I didn't spell it out but it shows up in the population to labor force ratio graphs.

Both historically, and perhaps traditionally, the bulk of those offshored jobs are going to countries which also happen to purchase the bulk of America's debt.

I've always suspected -- and it has long been rumored -- of an existing quid pro quo.

Again, the rising debt and deficit spending is directly connected to the increase in all those debt-financed billionaires and multi-millionaires in America (and elsewhere). Without the one, there wouldn't be the others.

1) What is America's economic engine?

to answer your question:

2) Our economy left decades ago when neoliberal policies took over.

An annual ritual -- where assumptions are made that defy belief. Ketchup in the school lunch program is a vegetable. Congress will pass the tax proposals sent up by the White House. A few years back, I was in a meeting with the Chairman of the House Appropriations Committee, and he said: "George Bush is my friend, but I wish he would read the Constitution. Every nickel this country spends starts right here in this committee."
Since then, I've always thought of the Federal Budget in the same way you think of a kid's letter to the smiling man at North Pole.
Frank T.