June 2013 Retail Sales increased by 0.4% on auto sales, which increased 2.1% from last month.  Motor vehicle dealers are having a good year.  Their sales have increased 12.9% from a year ago.  Without motor vehicles & parts sales, June retail sales would have shown no change from last month.  Furniture had a surprise showing with a 2.4% increase in sales.  If one removes gasoline sales from retail sales, overall the increase would have been 0.3%.  Miscellaneous store retailers decreased -2.5% and building materials, garden equipment & supplies also had a poor showing with a -2.2% monthly decline.  Retail sales are reported by dollars, not by volume with price changes removed. 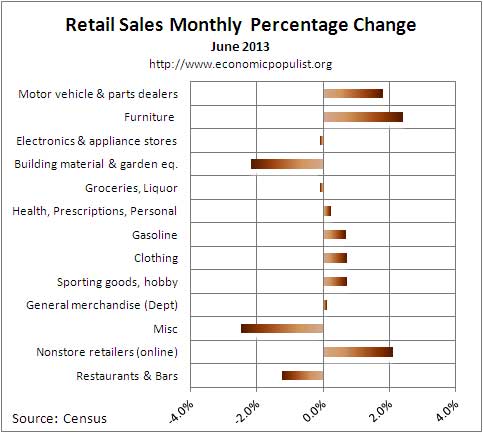 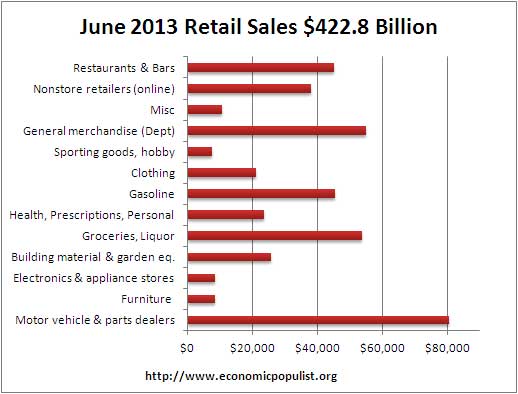 For reference sake, graphed below are weekly regular gasoline prices, so one can see what happened to gas prices in June.  Just recently gasoline prices have been soaring. The below pie chart breaks down the monthly seasonally adjusted retail sales by category as a percentage of total June sales by dollar amounts.  One can see how dependent monthly retail sales are on auto sales by this pie chart.  We also see non-traditional retailers making strong grounds on traditional general merchandise stores. 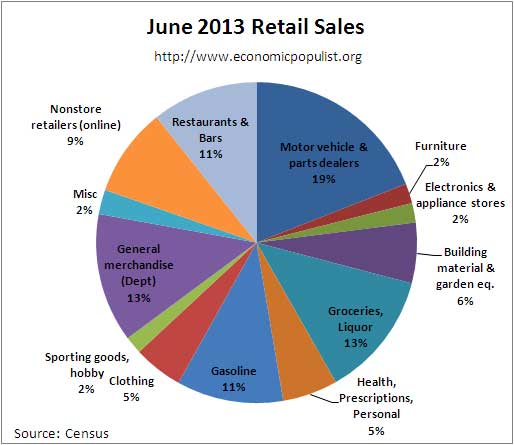 Retail sales correlates to personal consumption, which in turn is about 70% of GDP growth.  Yet GDP has inflation removed from it's numbers.  This is why Wall Street jumps on these retail sales figures.  Below is the graph of retail sales in real dollars, or adjusted for inflation, so one gets a sense of volume versus price increases.  Below is the annualized monthly percentage change in real retail sales, monthly, up to May 2013. To obtain real values, retail sales are deflated using CPI.  Below are the real retail sales quarterly annualized percent change.  The graph displays up to Q1 2013. I don't have the error margin off hand, but this is true on many of the economic reports, the revision looks better or worse due to significant digits but figuring out the validity of significant digits on these is a lot of work!