September 2013 Retail Sales decreased by -0.1% on auto sales, which plunged -2.4% from the previous month.  Motor vehicle dealers sales have still increased 5.8% from a year ago.  Without all motor vehicles & parts sales, September retail sales would have shown a 0.4% increase.  Retail sales on the whole have only increased 3.2% from a year ago, although the quarter shows a 4.5% increase in comparison to Q3 of the previous year.   Retail sales are reported by dollars, not by volume with price changes removed. Retail trade sales are retail sales minus food and beverage services.  Retail trade sales includes gas, and is down -0.2% for the month and has increased 3.1% from last year.  People are shoppin' less it seems. 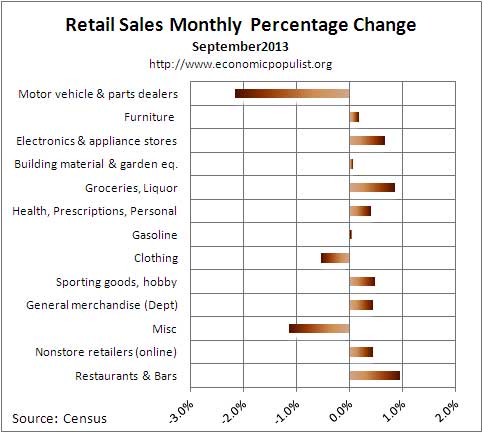 Below is a graph of just auto sales.  We see how the recession just decimated auto sales and also how autos have had a pretty good run since that time.  Notice the recent downturn in auto sales.  While auto manufacturers have warned the government shutdown would slow sales, it is unclear why sales declined.  Some are quoted as claiming a supply shortage while others are blaming less shopping days in September, which hardly seems to be reality considering labor day was on the 2nd. Below are the retail sales categories by dollar amounts.   As we can see, autos rule when it comes to retail sales. &nbsp We also see that electronics, which are up 1.8% from a year ago, is much smaller by total dollars than motor vehicle sales.  This implies there is a hell of a lot of hype around smart phone sales in terms of the overall economy.  The cell phone industry knows how to use the press instead of pay for advertising to hype their products, but in terms of the U.S. economy, cell phones are a drop in the bucket. 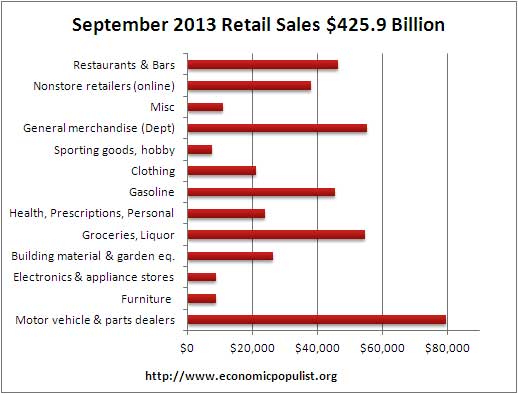 Graphed below are weekly regular gasoline prices, so one can see what happened to gas prices in September.  Gas was declining in September, so price explains the declining sales for gasoline stations.  The below graph goes into October, so we can expect no growth gasoline station sales in next month's retail sales report. 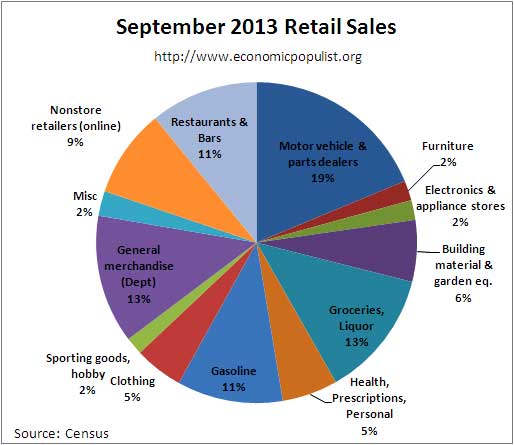 Retail sales correlates to personal consumption, which in turn is about 70% of GDP growth.  Yet GDP has inflation removed from it's numbers.  This is why Wall Street jumps on these retail sales figures.  Below is the graph of retail sales in real dollars, or adjusted for inflation, so one gets a sense of volume versus price increases.  Below is the annualized monthly percentage change in real retail sales, monthly, up to August 2013.  While some in the press are claiming retail sales implies poor consumer spending, it looks like sluggish consumer spending for Q3, although to really estimate PCE we need the actual monthly statistics. To obtain real values, retail sales are deflated using CPI.  Below are the real retail sales quarterly annualized percent change.  The graph displays up to Q2 2013.  Due to the shutdown, CPI won't be out until tomorrow. For the three month moving average, from July to September, in comparison to April to June, retail sales have increased 1.1%.  The retail sales three month moving average in comparison to a year ago is up 4.5%.  This implies just slightly better spending overall as shown the below graph of quarterly annualized retail sales percentage change, up to Q3 2013.  We do not know inflation or prices yet, but by raw volume, it looks like consumer spending will be around the same as Q1.  In a word, sluggish.