One of my pet peeves is that the focus on housing qua housing completely misses other critical drivers that made bad housing debt the detonator of a global financial crisis. One was the activity of subprime shorts. For every $1 in BBB subprime bonds, Standard & Poors estimates ten times amount was created in CDS on those bonds, which were typically created as part of synthetic or heavily synthetic CDOs. And who was on the other side of those trades? Leveraged institutions that could not take much in the way of losses: AIG, European banks, US investment banks, monolines. And those dominoes falling set off other failures. For instance, commentators continue to ignore that the damage to the monolines led to the failure of the auction rate securities market (the dealers stopped propping it up because they did not want to hold inventory that would fall in value when the monolines were downgraded, which was clearly inevitable). The seize up in the ARS market in turn kicked off a series of disasters in the municipal market, as borrowers had to pay punitive rates on their ARS and often on related swaps.

Read the rest of what Yves had to say.

The New York Times is wondering where are the U.S. jobs?

The gross domestic product here — the total value of all goods and services — has recovered from the recession better than in Britain, Germany, Japan or Russia. Yet a greatly shrunken group of American workers, working harder and more efficiently, is producing these goods and services.

The unemployment rate is higher in this country than in Britain or Russia and much higher than in Germany or Japan, according to a study of worldwide job markets that Gallup will release on Wednesday. The American jobless rate is also higher than China’s, Gallup found. The European countries with worse unemployment than the United States tend to be those still mired in crisis, like Greece, Ireland and Spain.

The article does a great job showing labor in the United States is being treated like a doormat, that labor needs more political power, rights. That said, as usual, the one phrase economists and financial writers ignore is global labor arbitrage. Offshore outsourcing, displacing Americans at every turn goes hand in hand with treating the U.S. worker like caca, yet there is an astounding code of silence among economic and financial writers.

EPI did a nice comparison of GDP growth in past recoveries to this one. Graph reprinted below. We have a similar graphs comparing past GDP growth, along with detailed analysis of the Q4 GDP report, but this one shows the spread. 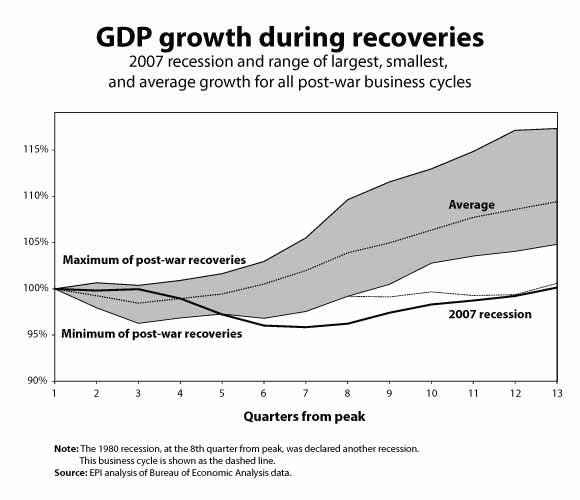 With every bad trade deal comes a lot of spin claiming it would create jobs. Public Citizen has put up a state by state analysis on how many jobs are at risk from the Korea Free Trade Agreement.

It's gluttony season. While the SEC approved Say on Pay, it's clearly a token symbol. Executive compensation is through the stratosphere.

Not to leave out Hedge Fund Managers, John Paulson only pulled $5 billion in a year.

Median total compensation for big public company CEOs was $7.5 million in 2009, according to Equilar, while median U.S. household income is closer to about $50,000.

Blankfein's 2010 pay was dwarfed by John Paulson, a hedge fund manager who earned an estimated $5 billion in 2010.

"It's quite possible that Blankfein got paid something in the same ballpark as Paulson's secretary," said James Ellman, president at hedge fund manager Seacliff Capital.

If you don't understand the background of why Egypt is imploding, this is a short background article with this one giving some economic statistics. Bottom line, when income inequality grows, very often revolution is soon to follow. By the way, the next time government shuts down the Internet, you might remember old fashioned communication methods, like dial-up, mega phones and word of mouth. Paul Revere rides on many paths, not just the Internets.