The headlines blare unemployment rate remains the same! Yet February added 227,000 jobs, and January was revised upward to 284,000 jobs. So, how could the official unemployment rate not budge when in two months over half a million jobs, 511,000, were added? You see those yearly spikes and drops? Those are not magic sudden changes in population, those are statistical yearly adjustments. That mondo spike in January is the 2010 Census adjustments. In other words, the BLS adjusts the error for the entire year and tacks it onto the change between December and January. Additionally, every 10 years the new Census adjustments are added. All other ratios, including the unemployment rate, are derived from the non-institutional civilian population base. The workforce comes from this group of the population. The ratio of those participating in the workforce is 63.9% to those who are not. In other words only 63.9% of the non-institutional civilian population is counted as the labor force. This ratio is called the labor participation rate. Only 63.9% are considered participating in either working or officially looking for work, the rest of the civilian non-institutional population, 36.1%, are not counted and are called not in the labor force. This ratio is at all time lows even while increasing 0.2 percentage points in February. In January, the labor participation rate was 63.7%. The unemployment rate is calculated by:

There are two places the unemployed can go. They can find a job or drop out of the count and enter not in the labor force. Those of the civilian labor force who are employed increased +428,000 to 142,065,000. Below is the monthly change in employment levels for the population based unemployment survey. Those unemployed increased +48,000 to 12,806,000. Where did those people come from when those employed increased so much? Those added to the unemployment rolls came from increased population growth and people who previously were not counted, or in not in the labor force. Many decided to actively start looking for work again. There are millions of these people who have given up looking for work, who probably will start looking again, encouraged by the recent payrolls job growth. When this happens we should see the labor participation rate start to increase. There are actually two separate employment surveys. Those 227,000 payroll jobs added are from the other survey. This separate survey asks businesses, not people, how many actual jobs they added. The household survey, from where the unemployment rate comes, has a smaller sample size, a larger error margin, plus those yearly adjustments.

The unemployment rate is just a ratio. Realize there is a large segment of the working population that is classified as not in the labor force. 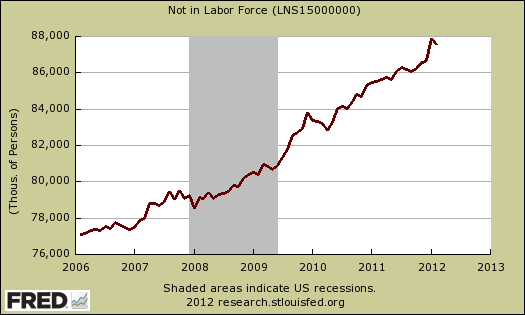 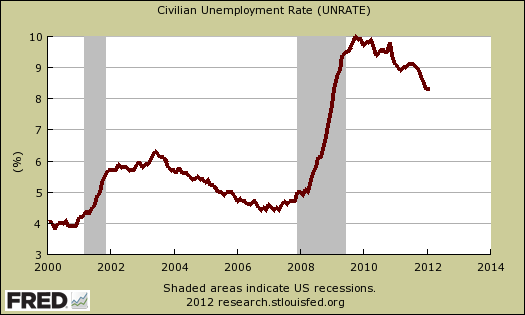 In other words, the official unemployment rate is double what it should be for a healthy job market. People are so used to a crappy, unbelievably worker hostile, labor market, they don't realize we have not had a decent job market since 2000. That's 12 years ago! The unemployment rate in April of 2000 was 3.8%. That's where we should be, not singing cheers over 8.3%.

I simply cannot believe MarketWatch made this mistake, but they did. They are claiming the job growth is the best in 6 months since 12 years ago.

Hello, what is it about the 2010 Census and subsequent major revisions did they not understand? Again, the benchmarks are added into January data. Of course it's the biggest jump in 12 years. Year 2000 also had Census data incorporated.

Unbelievable error by a media outlet that usually gets these reports right.

See this and this.

When the civilian non-institutional pop is adjusted, so are the employed levels and the unemployed actual levels.

Caught another professional there with this funky BLS statistical adjustment.

If one wants to compare 6 months worth of data from the CPS on employment levels, probably the closest we can get is this BLS paper, Employment from the BLS household and payroll surveys: summary of recent trends

In the above linked paper, the BLS first uses a smoothing function to smooth out the Census adjustments over time, which is key critical to not simply count Census adjustments and report them as "jobs". Then the two surveys are quite different. We usually mention the CPS has an error margin of over 400k jobs per month (which is huge!). The above link they rectify the two surveys to remove self-employed and a host of other adjustments to try to compare the overall trend of employed persons levels from the CPS to the jobs reported from the CES.

Yes, it's all ridiculously confusing but at least the BLS offers up something here so you can compare apples to apples.

For example, Marketwatch claims they are 2.3 million jobs in 6 months, that's very wrong as we stated, due to the end of the year population controls adjustments plus incorporation of the 2010 Census adjustments.

The BLS gives a year over year increase of the CPS, but they smoothed out the Census adjustments. They get, for the year, 2.3 million more employed persons than February 2011.

Paul Craig Roberts, relying on shadowstats, uses this no-change in unemployment rate as evidence in support of the shadowstats analysis.

See, my comment over at "The Bloom Comes Off" -- BLS birth-death model