Rand Paul and Ron Paul — comparing apples and oranges? I don't think so, because, as usual, the apple doesn't seem to fall very far from the tree.

Ron Paul supported the elimination of all income tax and the IRS. While his son's tax plan isn't quite as radical, it's still disingenuous — because they're both selling snake oil to us.

Libertarians and Republicans alike — whenever proposing tax plans and budgets — always say they can "save the government" so many dollars, rather than saying "cut government spending" by so many dollars.

But then again, it seems all politicians (of all persuasions) are constantly using their word games and double-speak to fool and screw over the American people. It's a never-ending maze of spin.

Marco Rubio's tax plan proposes to abolish all taxes on capital gains, dividends and estates — but Rubio’s plan would offer nothing to millions of low-income workers, and would actually raise taxes on many more — while cutting $4 trillion over 10 years on government spending (or "saving" the government $4 trillion).

Rand Paul is the latest presidential candidate to propose that our tax rates must be "flat" — just like the world they believe we live in — just as Steve Forbes, Newt Gingrich, Rick Perry and all the other failed candidates who had once advocated for flat taxes during their own presidential campaigns.

Rand Paul latest pronouncement: "I think a flat tax is fairer, in some ways, because some rich people pay zero now." At the Wall Street Journal (June 17, 2015) Rand Paul writes:

"My tax plan would blow up the tax code and start over. In consultation with some of the top tax experts in the country, including the Heritage Foundation’s Stephen Moore, former presidential candidate Steve Forbes and Reagan economist Arthur Laffer..." [Let's take a quick peek at Rand Paul's economic advisers.]

At the New York Times (June 29, 2014) Paul Krugman writes: "Kansas sharply slashed income taxes without any clear idea of what would replace the lost revenue. Sam Brownback, the governor, proposed the legislation — in percentage terms, the largest tax cut in one year any state has ever enacted — in close consultation with the economist Arthur Laffer. And Mr. Brownback predicted that the cuts would jump-start an economic boom — “Look out, Texas,” he proclaimed. But Kansas isn’t booming — in fact, its economy is lagging."

At the Kansas City Star (July 7, 2014) Stephen Moore writes: "Paul Krugman of The New York Times took a shot at Arthur Laffer and me ... calling us “charlatans and cranks” for advising governors around the country to cut taxes to boost economic growth and jobs."

At the Kansas City Star (July 31, 2014) On the editorial page, the editor writes: "I won’t be running anything else from Stephen Moore."

From the L.A. Times (August 5, 2014): "The Kansas City Star probably thought it was on solid ground when it published an op-ed by Stephen Moore defending the draconian, and economically debilitating, tax cuts instituted by Kansas Gov. Sam Brownback ... It turns out Moore's statistics were dead wrong."

At the New York Times (April 10, 2015): Paul Krugman writes: "No, [Arthur] Laffer hasn’t “grown out of fashion” with mainstream economics — he was never in fashion. There was never any evidence to support strong supply-side claims about the marvels of tax cuts and the horrors of tax increases."

Now that we know who Rand Paul's economic advisers are, let's look at his tax plan. First of all, if Fox News praises it, then we know their multi-millionaire pundits such as Bill O'Reilly, Sean Hannity and Neil Cavuto will all get big tax cuts.

Rand Paul proposes a 14.5 percent flat tax that would apply equally to all personal income, including wages, salaries, dividends, capital gains, rents and interest (and there would be no payroll taxes to fund Medicare and Social Security) — as well as a 14.5% corporate tax rate on business income. His plan will cut government spending by $2 trillion (or "save" the government $2 trillion.)

Also according to Rand Paul's tax plan, all deductions except for a mortgage and charities would be eliminated — and for low-income working families, the plan would retain the earned-income tax credit — and the first $50,000 of income for a family of four would not be taxed.

Wage data from Social Security shows 73% of ALL wage earners make less than $50,000 a year, so who will pay taxes? There were 110 people earning over $50 million a year (in wages only, not including capital gains and dividend income) — and they would see their tax rate fall from 39.6% to Rand Paul's 14.5% tax rate.

Rand's plan for single (head of household) individuals earning regular wages of $439,000 (and higher) now pay the current federal tax rate of 39.6% — but that would go down to 14.5% under Rand Paul's plan.

Below: Current marginal tax rates on wages for 2015 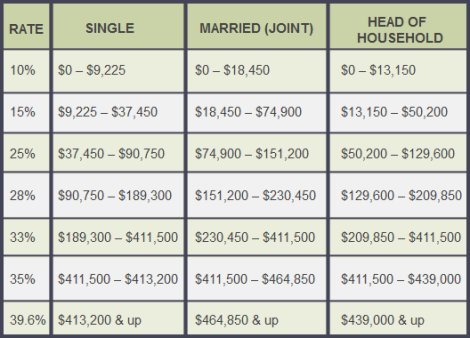 And Rand's plan for capital gains income (aka "investment income" or "unearned income") for billionaires that rake in income from the sell of stocks (and stock option grants), beachfront mansions, gold bars, coin collections, rare paintings, wine collections and precious stones (such as rubies and diamonds) is currently taxed at the top rate of 23.8% — but this would go down to 14.5% under Rand Paul's plan.

Rand's plan also eliminates the gift tax and estate taxes for rich parents, who can each currently exempt the first $5.43 million that they leave to their trust fund babies in inheritances.

Rand Paul claims, "This will boost the incentive for employers to hire more workers" — even though our "employers" currently already have over $2.1 trillion in profits sitting in offshore banks without giving their workers any significant raises in wages (if any at all) — or without inducing any more investment, job training or hiring.

These generous tax cuts (just like George W. Bush's) will only allow these same corporations to hoard ever more cash — or make more stock buybacks. Investors will already rake in more than $1 trillion in 2015 as U.S. companies increase stock buybacks and boost dividends.

Rand Paul calls the IRS a "rogue agency" and also make preposterous claims about increasing GDP by 10% within 10 years with his plan, but while only creating another 1.4 million new jobs during that same time (that's a meager 11,700 jobs a month over ten years — and they will most likely all be part-time low-paying temp jobs for college grads.)

And speaking of Rand Paul — like father, like son — his dad (who also ran for President) has been regularly running infomercials on TV — often on the Fox News channel and other stations. Here's Ron Paul's website that he advertises in his infomercials — which advertises this book. A review shows it to be a scam. Rand Paul’s dad wants to sell you his book for $110 and have you invest in silver, gold and bitcoins. Just like Glenn Beck and his gold commercials — they are all opportunists selling snake oil to gullible people — using fear and/or ignorance.

But these people also want to cut taxes on the rich so that the government will be forced to cut spending ("save money") on programs such as Social Security.

Hillary Clinton's plan isn't so great either: She said she would raise the maximum tax rate on capital gains made on assets held at least a year, but no more than perhaps two or three years (currently taxed at 23.8 percent) to at least 28 percent. Big frigging deal. Whoop-de-do!

A short history of the capital gains tax rate:

So Hillary's "plan" to raise this tax rate from 23.8% to 28% is mostly just symbolic, because it is still far below the top marginal rate of 39.6% for regular wages. But according to the Wall Street Journal, Hillary has not ruled out raising the rate on capital gains as high as that on regular income — which is total B.S. — because all she can do is sign a tax bill that Congress passes. And with a Republican dominated Congress (with too many pro-corporate Democrats), that ain't ever going to happen.

Hillary supposedly said she would (if she could really do anything as President) also add additional "time thresholds" for holding assets, after which the tax rate would drop, rewarding individual investors who hold assets longer than the current one-year threshold. Although, some tax experts question whether this would in turn alter a company's investment behavior for the better — (such as more stock buybacks to pump up dividends and create more excessive CEO pay, rather than hiring people and offering better wages.)

So expect these politicians to be making all kinds of promises or proposals when they run for office. But in reality, they will all still be selling us snake oil. Nothing ever changes, so don't anybody get their hopes up in 2016 — not unless the current Congress can be completely reconfigured with a majority of PROGRESSIVES — such as Senators Elizabeth Warren and Bernie Sanders (who are more like FDR).

Otherwise, just expect "more of the same" for a long time to come — because, just like Rand and Ron Paul's tax plans, most of our politicians are rotten to the core.

So gee, Trump acknowledges single payer health care is good for business, the most efficient, effective, cheapest and says so what socialism it works to get for profit out of health and have it be a public benefit, as it should be.

Should be interesting on these never ending ridiculous tax agendas, regressive taxes.

I did hear one thing from conservatives which really had a point, one cannot start any program without it becoming corrupted almost immediately. That's not mentioned much with FDR and Francis Perkins, they quietly got corruption out and why their new deal programs worked. They did manage to get the money to the people instead of the deep corrupt pockets of businesses and political donors.

"CNBC was on in the gym, so I was treated to a long ad from Ron Paul, who wants you to buy his video explaining the coming crisis brought on by loose money. And I found myself thinking about the remarkable fact that there really are people who will buy that video ... I’d say it’s sad, but I find it hard to feel much sympathy for the marks of this particular scam. Then again, that’s probably why they will never, ever listen to what I have to say."

A super PAC backing Rand Paul's presidential candidacy raised $3.1 million in the first half of 2015, with two-thirds of the total coming from just two donors: George Macricostas, the chairman and CEO of a RagingWire, a data center company, and Jeff Yass, the owner of Susquehanna Partners, an investment firm.