The fiscal cliff is the result of the inability to close the federal budget deficit. The budget deficit cannot be closed because large numbers of US middle class jobs and the GDP and tax base associated with them have been moved offshore, thus reducing federal revenues. The fiscal cliff cannot be closed because of the unfunded liabilities of eleven years of US-initiated wars against a half dozen Muslim countries–wars that have benefited only the profits of the military/security complex and the territorial ambitions of Israel. The budget deficit cannot be closed, because economic policy is focused only on saving banks that wrongful financial deregulation allowed to speculate, to merge, and to become too big to fail, thus requiring public subsidies that vastly dwarf the totality of US welfare spending.

Surely this should be illegal, but for now it isn't. Potential employers, during an interview, are demanding applicants private passwords to personal online accounts.

When Justin Bassett interviewed for a new job, he expected the usual questions about experience and references. So he was astonished when the interviewer asked for something else: his Facebook user name and password.

Bassett, a New York City statistician, had just finished answering a few character questions when the interviewer turned to her computer to search for his Facebook page. But she couldn't see his private profile. She turned back and asked him to hand over his log-in information.

Tin climbed the most in almost four months in London as prospects of low U.S. interest rates at least until 2014 boosted speculation of increased demand for the metal used in mobile phones, plasma screens and cars.

Gold bugs are also going nuts and most commodities have jumped in prices, almost overnight.

There was a one two three punch by the Federal Reserve. First the FOMC announced uber-low interest rates until 2014.

The Committee expects to maintain a highly accommodative stance for monetary policy. In particular, the Committee decided today to keep the target range for the federal funds rate at 0 to 1/4 percent and currently anticipates that economic conditions--including low rates of resource utilization and a subdued outlook for inflation over the medium run--are likely to warrant exceptionally low levels for the federal funds rate at least through late 2014.

With the New Hampshire primary coming round tomorrow, we're finally seeing a few solid articles worth reading. Some Journalists are digging deep into a few Republican candidates' background and economic philosophies. We pulled up a few articles worth your eyeballs to read in a sea of spin, polls and gotchas.

A new year, a new day and a flurry of economic and financial predictions. Who are we to buck the trend? Yet, buck the trend we shall. While many news articles claim jobs will appear in 2012 and the economy is on the mend, uh, we don't think so. What we have is America stuck in a Labrea tar pit of bad policy and a never ending middle class head shrink.

Cook outs, barbeque, Frisbee with the pooch, family and friends. A time to relax and gear up for fall. Even the Department of Labor has gotten into the spirit of things with a labor day picture history. 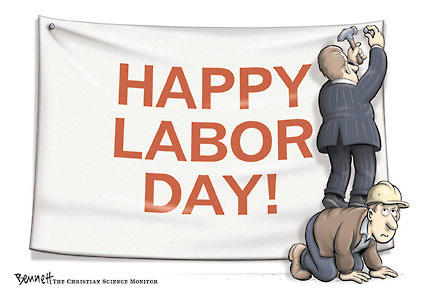