Surely this should be illegal, but for now it isn't. Potential employers, during an interview, are demanding applicants private passwords to personal online accounts.

When Justin Bassett interviewed for a new job, he expected the usual questions about experience and references. So he was astonished when the interviewer asked for something else: his Facebook user name and password.

Bassett, a New York City statistician, had just finished answering a few character questions when the interviewer turned to her computer to search for his Facebook page. But she couldn't see his private profile. She turned back and asked him to hand over his log-in information.

Egan also hinted at the legal repercussions: “If an employer sees on Facebook that someone is a member of a protected group [e.g., over a certain age, etc.], that employer may open themselves up to claims of discrimination if they don’t hire that person.”

Employers also may not “have the proper policies and training for reviewers to handle private information,” Egan added. “If they don’t—and actually, even if they do—the employer may assume liability for the protection of the information they have seen.” That information may also incur certain responsibilities, such as reporting the possible commission of a crime.

Bombshell - John Corzine Busted (or will be we assume)

Edith O’Brien, a treasurer for the firm, said in an e-mail quoted in the memo that the transfer was “Per JC’s direct instructions,” according to a copy of the memo obtained by Bloomberg News. The e-mail, dated Oct. 28, was sent three days before the company collapsed, the memo says. The memo does not indicate whether that phrase was the full text of the e-mail or an excerpt.

Odds are MF Global customers will never never get their money back.

Yet another 750,000 jobs are going offshore by 2016. You can bet we'll see more denial on this negatively affecting the U.S. worker and the overall economy. Yes, this number is clearly too low.

Some 750,000 jobs in IT, finance, and other business services will be offshored from the U.S. and Western Europe to developing nations between now and 2016, according to a study released this week by the Hackett Group. Among the positions going overseas will be 270,000 IT jobs. 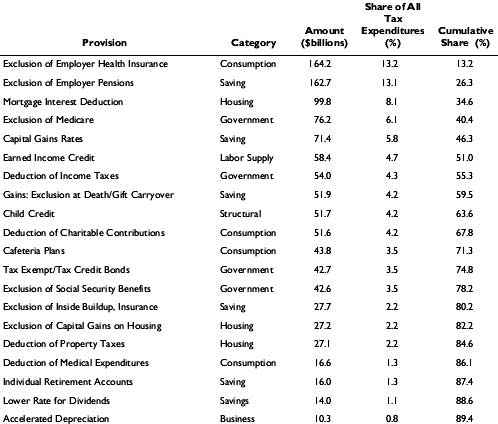 The link is to the actual Congressional Service report, a large pdf. You might want to read that instead of other's interpretations. Unfortunately the report amplifies lowering top tax rate further in the summary. That focus doesn't bode well for objectivity of the report, still the facts look solid. Above are the top 20 tax break identified for fiscal year 2014, if all are extended, plus their impact over the years.

Yet another example of how stickin' it to the citizens doesn't work out too well:

The problems of being on a gold standard can be seen in China’s decision to tie its currency to the U.S. dollar, Federal Reserve Chairman Ben Bernanke said Tuesday.

China is a modern example of the flaws similar to those of the gold standard, Bernanke said Tuesday in the first of four lectures at George Washington University. Because China ties it currency to the U.S. dollar, it could experience inflation, Bernanke said, noting that China’s currency has become more flexible lately.

“If the Fed lowers interest rates and stimulates the U.S. economy, that means also that essentially monetary policy becomes easier in China as well. Those low interest rates may not be appropriate for China,” Bernanke said. “China may experience inflation because it’s tied to U.S. monetary policy.”

Total student debt outstanding appears to have surpassed $1 trillion late last year, said officials at the Consumer Financial Protection Bureau, a federal agency created in the wake of the financial crisis. That would be roughly 16% higher than an estimate earlier this year by the Federal Reserve Bank of New York.

We have more horror stories on student loans from last week's Saturday reads. Additionally the Consumer Financial Protection Bureau is open for business and taking complaints on student loans and checking accounts.

Workplace discrimination against employees based on race, gender or sexual orientation costs businesses an estimated $64 billion annually, a recent report from the Center For American Progress finds. The businesses incur costs in a variety of ways, including through the turnover of about 2 million employees who leave their jobs due to discrimination.

The Economic Populist uses FRED like a mad dog. Now others are recognizing the most fantastic economics data and graphing system out there, put together by a very small group and FREE!

And the charting tool can't be beat. It took us two seconds to make that initial claims vs. S&P 500 chart you see above. There are tons of sites out there that have data (including many commercial ones run by large enterprises that would like to dominate the financial data space) and none have come close to matching the simple elegance of FRED's charts. Want to compare the total volume of household savings as a percentage of GDP vs. the yield on the average CD? DONE (click the chart on the right to enlarge).

When I saw FRED's web hits statistics, frankly we're probably one of the largest page view generators for FRED, just by the configuration we use here for graphing. FRED ROCKS and this site has complimented the team, commented on the technology behind the site, many a time. It's nice so many others are realizing what a gift FRED is to make sense out of economic data. Watch out St. Louis Fed, Google is gonna steal that guy one day, seriously, and you know who I'm referring to.