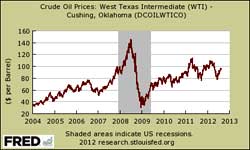 Nowadays the energy picture is confusing at best as the more information we are shown the more blurred our vision seems to become. Mixed messages, poor reporting and a media hungry to sensationalize anything it thinks can grab a headline have led to many wondering what the true energy situation is. We hear numerous reports on how the shale revolution will transform the energy sector, why alternatives are just around the corner, why advances in oilfield extraction techniques and new finds will help to lower oil prices. Yet no sooner have we read these rosy reports than we are bombarded with negative news on the Middle East, on why alternatives will never compete, on peak oil and declining oil production.

So where do we really stand? Is our energy future one of falling prices and plentiful supply or should we prepare for declining supply and sky high prices?

During the recent weeks, when we learned that the National Oceanographic and Atmospheric Administration (NOAA) is refused access to research and measure the spill by British Petroleum (BP), and the US Coast Guard warns reporters, research scientists and engineers away from the area, stating that they are simply following orders --- from BP --- one might surmise the sovereignty of the United States of America has been ceded to an oil multinational.

It would certainly appear that way. Many complaints have been heard from a variety of scientists and engineers, eager to monitor, research and learn from this catastrophe, in order to better prepare, and avoid, future such occurrences.

But what of the past decade and BP's other adventures?

In another case, on June 28, 2006, CFTC brought an enforcement action against BP Products North America, Inc., alleging, among other things, that BP cornered the physical propane market and manipulated the price of propane in February 2004.63 Also on June 28, 2006, DOJ announced that a former BP trader had pled guilty to conspiracy to manipulate and corner the physical propane market.(emphasis added - JW)