Welcome to Outrageous Economic Shorts, the reader's digest of economic horror.  Below are studies, facts and figures that should be enough to make your hair curl.  Unfortunately information like this pops up every week.  Yet read it and weep, here's some of the latest.

It is 2013 and a dirty little secret is once again coming to light.  Silicon valley is devoid of women computer scientists and engineers.   It all started at a tech conference where two men in the audience were engaging in tech's typical juvenile sex jokes chatter with a woman techie sitting right in front of them.

The never ending stream of bad news for the U.S. work force cascades upon us like a tidal wave of despair. A host of studies have come out which put into numbers what most of us know, the American worker is being taken to the brink of financial ruin and even death.

Suicide has replaced motor vehicle accidents as the leading cause of death by injury and has increased 15% since 2000. While most people who commit suicide has psychiatric disorders, the fact is higher incidents of suicide do happen during bad economic times. Even more amusing is the government response, as if the best cure for feelings of despair, low self worth is not a damn job along with a healthy dose of respect for working people.

Homeless rates have actually not changed between 2009-2011, but that's only due to a large grant by the Federal government to keep more people sheltered. Now that funds have run dry and under attack by deficit hawks, expect homeless numbers to rise.

Despite the fact that the number of homeless people was essentially unchanged between 2009 and 2011, there is much reason for concern. As this report points out, economic and demographic indicators linked to homelessness continue to be troubling. Homelessness is a lagging indicator, and the effects of the poor economy on the problem are escalating and are expected to continue to do so over the next few years.

Welcome to the weekly roundup of great articles, facts and figures. These are the weekly finds that made our eyes pop. Sometimes events are just tidbits of more injustice, absurdities and disaster.

Corzine Will Get Away With It

How many times have we seen this? 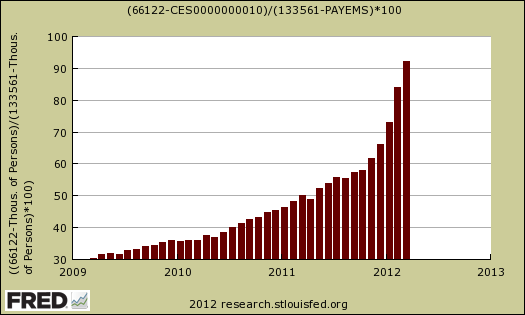 The Supreme Court just landed a body blow to women. They sided with Wal-Mart on a class action sex discrimination lawsuit by blowing apart the class action status of the suit. The court was unanimous that the case was too big, yet the decision was split to let the case be reformed for another chance. The court ruled 5-4 against the women of Wal-Mart.

The case was seeking damages for 1.5 million women. In 2001, Wal-Mart had only 14% of women in management and 80% of women in the lowest paid positions. Wal-Mart also allowed local managers to use their own discretion in hiring and promotion decisions. NPR:

When the case was filed 10 years ago, women held two-thirds of the lowest-level hourly jobs and only one-third of the management jobs; and that women were paid on average $1.16 less per hour than men in the same jobs, despite having more seniority and higher performance ratings.

A lower court previously ruled the case should encompass all women who work at all Walmart stores. SCOTUS used the phrase commonality and quoted statistics to claim because 1.5 million women didn't have the same common experience, magically 1.5 million women at Wal-Mart are not subject to systemic discrimination. From the actual ruling:

The statistics are pathetic. Women still make 75¢ to a equal male worker in pay. Supposedly Obama wants to take this on after a new study, Women in America: Indicators of Social and Economic Well-Being, shows women are still getting the financial shaft across the economic board.

One of the more amazing spins of the day is how the term diversity has been cast to mean global labor. The original term was for United States Domestic diversity. In other words, giving equal opportunity in a nation to all of her citizens.

Well, there are now damning reports coming to light on what is happening to a large segment of the American Professionals and that is women.

The Joint Economic Committee of Congress released a report entitled Equality in Job Loss: Women Are Increasingly Vulnerable to Layoffs During Recessions.

According to the JEC: