You're going to love this one. The New York Times is reporting that instead of reducing health care costs by the reform bill, Doctors, Hospitals and Insurance companies are merging and also using their new clout for lobbying against any regulations. That's right, a monopoly and we all know monopolies do not bring down costs. Even worse, we have predictions that the big winners will be offshore outsourcers on the health care technology front, also consolidating.

Now, eight months into the new law there is a growing frenzy of mergers involving hospitals, clinics and doctor groups eager to share costs and savings, and cash in on the incentives. They, in turn, have deployed a small army of lawyers and lobbyists trying to persuade the Obama administration to relax or waive a body of older laws intended to thwart health care monopolies, and to protect against shoddy care and fraudulent billing of patients or Medicare.

Consumer advocates fear that the health care law could worsen some of the very problems it was meant to solve — by reducing competition, driving up costs and creating incentives for doctors and hospitals to stint on care, in order to retain their cost-saving bonuses.

The 26% excludes the population which qualifies for Medicare (age 65 or older).

The Consumer Price Index for September 2010 increased 0.1% from last month. For the year, the Consumer Price Index for all Urban Consumers (CPI-U) has risen 1.1%. The increase this month was all gas and food. Core CPI, or all items less food and energy, was unchanged from last month, where it too flatlined to +0.0%. This report is from the BLS website.

Ever go to a Doctor and feel you are being sold and peddled expensive services, procedures and drugs even to the point of a bogus diagnosis? Well, a new study validates what you perceived.

ANN ARBOR, Mich. — When doctors become invested in an outpatient surgery center, they perform on average twice as many surgeries as doctors with no such financial stake, according to a new study from the University of Michigan Health System.

A PriceWaterhouseCoopers report, The price of excess: Identifying waste in healthcare spending is quite an amazing read. It says the United States wastes $1.2 trillion a year. Jesus, we could bail out Goldman Sachs with that amount of money!

While we see blame the person, in things like "hey you're fat" to "you did not follow my orders and that's why you're sick"! sort of stuff...

The report also outlines some real statistics in terms of inefficiencies.

Our research found that wasteful spending in the health system has been calculated at up to $1.2 trillion of the $2.2 trillion spent in the United States, more than half of all health spending.

Next Time someone screams social security must be privatized, refer to this.

Without changes in law, CBO expects that the Social Security trust funds will be exhausted in 2043. If that point is reached, the Social Security Administration will not have the legal authority to pay full benefits and the amounts that could be paid would be about 17 percent less than those scheduled under current law.

I changed to the title because this is cross-posted at RebelCapitalist. Our health care system is killing us financially. We spend more on health care then any other country and have very little to show for it. It is causing inefficiencies in the job market. The system itself is incredibly inefficient. So, why, with all these problems, can't we reform our health care system?

WHO has a new study out on United States Health care.

Bloomberg pulled out of the report some damning facts:

Americans paid $6,719 a person for doctors, medicines and hospital visits in 2006, up from $4,570 in 2000, according to a report released today by the World Health Organization in Geneva. The yearly spending is more than nine times the global average. With a life expectancy of 78 for a person born in 2007, the U.S. trails at least 27 other countries among 193 in the report.

Anyone else following the report link, if you read the report and find some overview stats not mentioned here I hope you post them in the comments.

It really says something when the health care system of our country isn't just a danger to American workers, but to the entire global economy.


Americans spend $2.4 trillion a year on health care. The Business Roundtable report says Americans in 2006 spent $1,928 per capita on health care, at least two-and-a-half times more per person than any other advanced country.

In a different twist, the report took those costs and factored benefits into the equation.

It compares statistics on life expectancy, death rates and even cholesterol readings and blood pressures. The health measures are factored together with costs into a 100-point "value" scale. That hasn't been done before, the authors said.

The results are not encouraging.

Only in America. Literally!    A new survey says:

Fifty-nine percent of companies intend to keep down rising health-care costs in 2009 by raising workers' deductibles, copays or out-of-pocket spending limits, according to a survey by the Mercer consulting firm

More alarming statistics. A 5.7% increase in costs, last year was 6% and the deductibles have doubled.  Think it has to be this way?  Just look outside the United States.   OECD compares health care costs of nations as percentage of GDP. 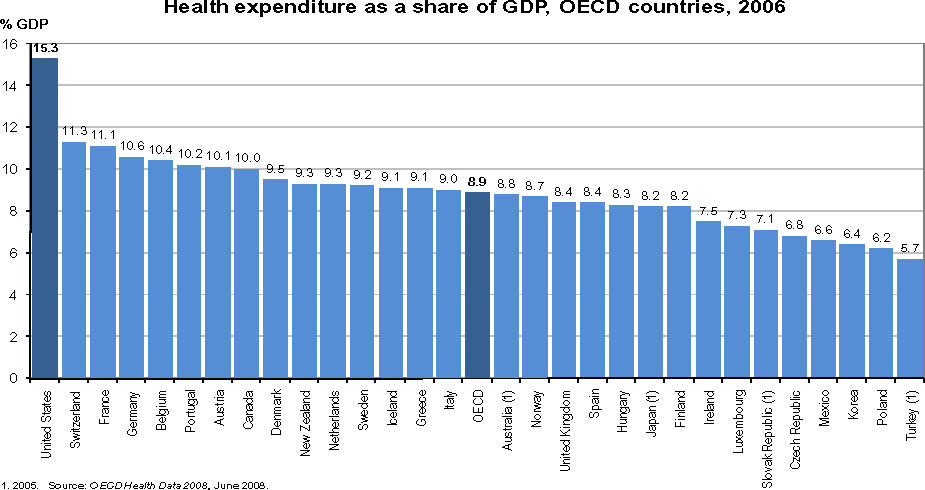