The BLS employment report shows total nonfarm payroll jobs gained were another dismal 113,000 for January 2014, with private payrolls adding 142,000 jobs.  Government jobs decreased by -29,000.  The silver lining of the jobs report is while the government continues to cut, cut, cut, there wasn't a lot of growth in crappy jobs and gains achieved were in typically higher paying ones.  The U.S. post office alone shed 9,000 jobs. For all of 2013, monthly job gains averaged 194,000 a month.  Below is an graph of annual gains and losses to America's payrolls.  This graph tells it all.  While the nation needs more jobs per year to employ the increasing working age population, we see annual growth in jobs actually stunted.  That repressed overall job growth isn't just due to the recession of 2008-2009, but goes back all the way to year 2001.  In 2013 there were only a 2.264 million jobs gained, about the same as the 2.249 million annual U.S. payroll gains in 2012  This just isn't enough to employ the increasing labor force, never mind recover the 7.7 million jobs lost in 2008-2010. 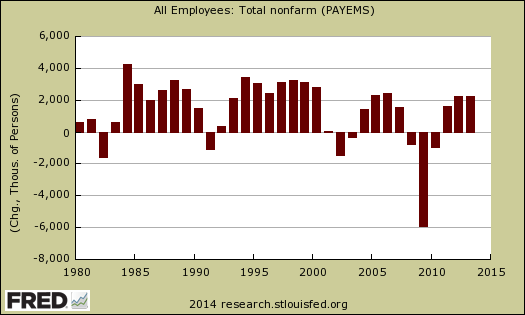 The monthly changes in job growth are shown in the below bar chart.  Retail trade typically has many big box low paying jobs.  Leisure and hospitality contains restaurant worker jobs, which are by far the lowest paying of them all. 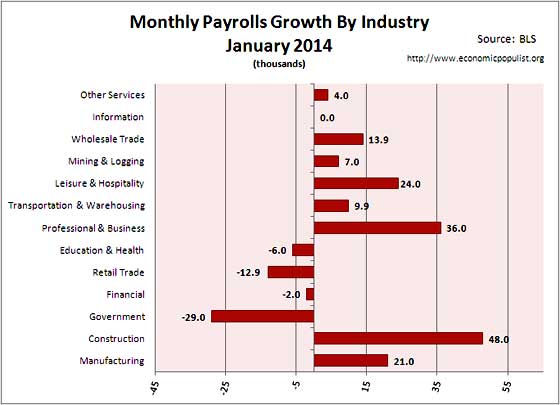 January's construction job gains were the highest since March 2007.  That said, construction payrolls are still decimated and the sector shrinkage is probably permanent as the housing hype and bubble increased construction jobs as shown in the below graph. Manufacturing's job gains are great news but here too the United States has been losing manufacturing jobs through offshore outsourcing and bad trade deals since the 1990's. While the BLS and the press tout professional services job gains, the technical sectors, especially I.T., are not employing Americans, but importing foreign guest workers on immigration Visas instead.  Unfortunately the BLS counts foreigners imported by these companies as American jobs gains, which clearly they are not.  For example, this month the BLS shows 20,000 technical jobs gained.  The problem is we have no idea how many of these jobs went to U.S. Citizens and those who actually live here permanently since the BLS refuses to report labor statistics by immigration status.  Below is the professional services sector and these jobs include many low paying administration types of jobs, waste management and temporary jobs. Since the politics continue to force austerity and government cuts at a time when the economy needs it least, we show the payroll gains in just the private sector below.  Private Sector jobs still have not recovered from the start off the recession.  The United States is still down -288 thousand private sector jobs from the start of the recession.  This tells us the economy and most importantly government policies are still so corrupt, driven by corporate agendas to labor arbitrage the American worker that the U.S. labor market just has not recovered.  At this point it probably will not until America gets a Congress and administration acting in national interest instead of the multinational corporate interest.  The below graph shows the job gains since December 2007 and as we can see, the graph is still negative. Below is a graph of the annual job gains in the private sector.  The graph tells the story of 14 years of terrible job creation.  The reason for this lackluster performance is not a lack of skills and ability of the U.S. labor force.  America has the best universities in the world with more Americans obtaining college degrees than the 20th Century.  Technological advances simply do not account for such piss poor job creation performance in America.  Offshore outsourcing and labor arbitrage certainly do. 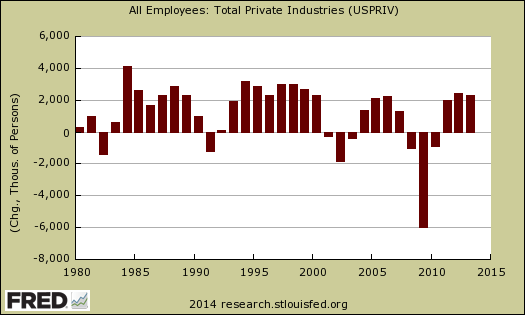 The bottom line for January's employment figures is yet another month of lackluster, stunted job growth.  Nothing will really change until Congress stops enabling offshore outsourcing, bad trade deals, flooding the labor market through foreign worker importing and puts the U.S. worker and American middle class as their top priority in policy.

"The job-finding rate is still substantially below its pre-recession levels, suggesting that it is still difficult for the unemployed to find work ...both the vacancy-to-unemployment ratio and matching efficiency declined during the Great Recession and have not recovered since ... the most important factor in the low job-finding rate is the persistently low level of vacancies per unemployed."

Sorry for the low articles. I have a family emergency. I hope all who visit this site daily just continue to write, put up Instapopulists and use the comments. Hopefully I'll have some new stuff soon, plenty to write about!