According to Jay Bookman at the Atlanta Journal-Constitution, Bill believes that the rich and and powerful aren't rich and powerful enough. But before we examine Bill O'Reilly bearing false witness again, let's take a quick assessment of cable TV news in general, and then see where Bill fits in to the scheme of things (pun intended) — or you can just skip to Jay's rebuttal.

Via Journalism.Org: According to Pew Research, surveys of news consumption shows that local television remains the most popular way of accessing news — and that the nightly network newscasts draw far larger audiences than the prime-time cable news shows. But while the largest audiences tune into local and network broadcast news, it is national cable news that commands the most attention.

But the cable viewers spend twice as much time than broadcast viewers do with local or network news — and the deeper level of viewer engagement with cable news may help to explain why cable television (despite a more limited audience) seems to have an outsized ability to influence the national debate and news agenda.

In prime time (when the audience is the largest) cable talk shows tend to hammer away at a somewhat narrow news agenda that magnifies the day’s more polarizing and ideological issues. Nielsen data make it clear that cable’s audience is "staying for a healthy helping of that content".

Also, significant portions of the Fox News and MSNBC audiences spend time watching both channels: 34% of those who watch the liberal MSNBC in their homes also tune in to the conservative Fox News Channel — and 28% of Fox News viewers also watch MSNBC. (Even larger proportions of Fox News and MSNBC viewers, roughly half, also spend time watching CNN, which tends to be more ideologically balanced in prime time.)

The three major cable TV news competitors differ somewhat in their viewership levels, with CNN reaching 20% of U.S. adults, Fox News reaching 18% and MSNBC reaching 14%. But yet, CNN consistently trails Fox News Channel in the rating wars [because Fox viewers are watching the Fox channel more often and for longer periods of time].

But emerging digital technology has changed news consumption choices, and local television has experienced viewership declines in the last several years, most acutely among young people. And there's also been significant declines in Americans’ reliance on newspaper and radio over time — 38% of Americans now access news online at home via a desktop or laptop computer. Some of the most popular news websites are affiliated with the three major cable news channels — CNN, Fox and MSNBC. (Nielsen did not measure those getting news at home from a smartphone or tablet device because they spend very small amounts of time on that task.)

Bill O'Reilly's show (The Factor) on the Fox News Channel is "the most watched cable TV news show" for that one hour time slot — but that may also be because it's heavily monitored by the left.

But, as CNN states at their website: "O'Reilly is the biggest star on cable news overall." Even though he was once getting some competition from Jon Stewart (whose viewers are younger, more intelligent and more affluent than O'Reilly's). 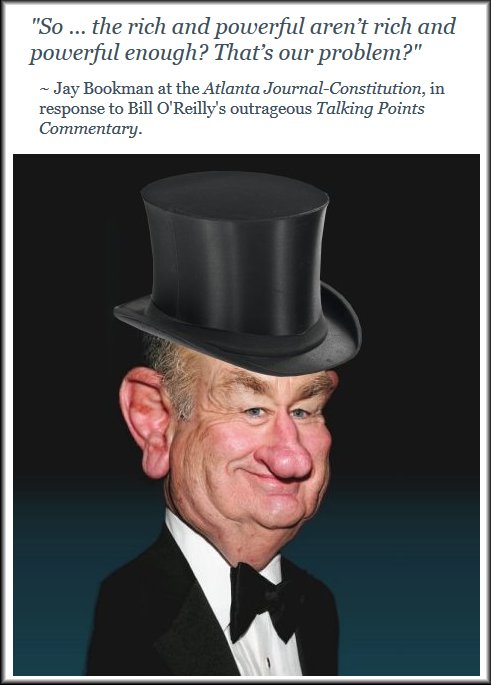 Last month, while discussing income inequality, Bill O’Reilly made the wild claim (text and video here): "Taxes are through the roof on affluent Americans and business profits; but for the rest of Americans, things are not so bad. How much more can the government take from the affluent without crashing the entire free market economy?”

Actually, at the Atlanta Journal-Constitution, Jay Bookman points out in a response to O’Reilly’s rant that the “entire free market economy” did nearly crash in 2008 — and that was after a decade of tax cuts for America’s most affluent. Bookman offers a variety of additional facts to rebut O’Reilly — such as his claim about corporate taxes going “through the roof”. In 1989, corporate taxes amounted to 1.9 percent of GDP. Last year, a quarter-century later, corporate taxes still amounted to 1.9 percent of GDP.

But of course, we can always rely on right-wing publications like the Wall Street Journal (owned by the same person who owns Fox News) to say otherwise: The Fantasy of a 91% Top Income Tax Rate:

"The confiscatory top marginal rates of the 1950s were essentially symbolic—very few actually paid them. In reality the vast majority of top earners faced lower effective rates than they do today."

We can always expect publications such as the Wall Street Journal (and people like Stephen Moore at the Heritage Foundation) to make claims such as these whenever referring to personal income taxes, but yet, they will never admit to this when referring to corporate income taxes. U.S. businesses made $1.8 trillion in after-tax profits last year. To date they have over $2.1 trillion in overseas profits stashed offshore. They are also currently paying historically low "effective tax rates" — while many pay no tax at all, and may actually get a government subsidy.

And last year the U.S. merger-and-acquisitions market (in deals worth $1 billion or more) rose 43% from the year before. And last year American companies have spent nearly $1 trillion on stock buybacks and dividends. Not to mention, the stock markets are at all-time record highs. So if corporations and the very rich have been over-taxed, where did they find all that spare cash?

And again, the issue of capital gains is always ignored by the right-wing media and the Republicans. This is where the top 0.01% makes most of their money; so they aren't even taxed at the top marginal rate as regular wages are (and that's why Warren Buffett's secretary pays a higher tax rate).

The Wall Street Journal also says: "When Ronald Reagan finally lowered rates in the 1980s..." Actually, it wasn’t Ronnie, it was really Jimmy:

When this 15% tax rate was allowed to finally expire at the end of 2012 (as it was originally intended in 2010), Bill O'Reilly (the Fox News liar) accused Obama of raising taxes (including payroll taxes for wage earners). But all that Obama and Congress did was just to allow those temporary tax cuts to finally expire. The 3.8% surtax on capital gains was a provision of Obamacare that was passed by Congress in 2010 to help expand Medicaid to the states.

And capital gains (unlike regular wages) is still not taxed one penny for Social Security either. So when compared to a tax rate of 40% for capital gains in 1979, or a top marginal rate of 39.6% in 2015 for regular wages (that are taxed for FICA), a 23.8% capital gains tax rate today (for Bill Gates, Warren Buffett, Mitt Romney and the Walmart heirs) it's still a lot lower than what Warren’s secretary still has to pay on earnings from her regular wages.

But still, even though President Obama raised Bill O'Reilly's taxes (not), Bill still works at Fox News, even though he said he would quit his job if his taxes were ever increased.

How much has this growing inequality cost average Americans? A NPR analyst ran the numbers earlier this year: If the United States today had the same distribution of income today as it did in 1979, average incomes of America’s middle 20 percent of families would be $8,700 a year higher today — and the average incomes of the nation’s top 1 percent would be $825,000 less.

But trying to convince all the non-believers at Fox News may be impossible: A study by an MIT researcher shows that any attempts to debunk political rumors with facts may only reinforce their strength. And so therefore, Bill O'Reilly (the uber-rich con artist) will most likely be free to continue selling his toxic snake oil to the ignorant and misinformed poor ... because he doesn't want HIS taxes to go up.

And then there's this...

Bill O'Reilly and the GOP think they all (even Ben and Jerry) need MORE tax breaks, not less. Why? Because they're not rich enough? Maybe some people are too rich — and maybe some people shouldn't be rich at all.

And maybe Bill O'Reilly envies the Walton heirs and others who are much richer than he is. The poor and middle-class don't envy the rich. Just the opposite — a lot of ordinary working folks admire and aspire to be more like them. It's rich people who feels envy towards someone much richer — the uber-rich. Did you every hear of yacht envy?

We're not above borrowing a few not original from here graphs, appropriately attributed. Although looks like I need to update corporate profit overviews.

An updated chart from the Fed with all the data on one graph for corporate profits/taxes might be nice though ;)

And not all corporations pay corporate income tax. Some corporations pass their profits each year to their owners. For example, regulated investment companies pass profits to owners, and so do "S corporations." Out of the [1.8 trillion] in profits, before deductions and credits, a full $678 billion (38% of the total) happen in these pass-through forms, which are applying to a larger share of corporate profits over time.

"The creation of Fox News in 1996 was an event of deep, yet unappreciated, political and historical importance. For the first time, there was a news source available virtually everywhere in the United States, 24 hours a day, 7 days a week, with a conservative tilt. Finally, conservatives did not have to seek out bits of news favorable to their point of view in liberal publications or in small magazines and newsletters. Like someone dying of thirst in the desert, conservatives drank heavily from the Fox waters. Soon, it became the dominant – and in many cases, virtually the only – major news source for millions of Americans. This has had profound political implications that are only starting to be appreciated. Indeed, it can almost be called self-brainwashing – many conservatives now refuse to even listen to any news or opinion not vetted through Fox, and to believe whatever appears on it as the gospel truth."

The author behind the paper: Bruce Bartlett @ Wiki:
http://en.wikipedia.org/wiki/Bruce_Bartlett