America needs bookkeeping we can believe in. This is what the Congressional Oversight Panel Chair said on Morning Joe in talking about the banks toxic assets.

Visit msnbc.com for Breaking News, World News, and News about the Economy

COP's August report, The Continued Risk of Troubled Assets is trying to dig around in the dirt on those toxic assets held by financial institutions. Remember all of this? Wish it would all go away? It hasn't.

Ok, my notes, from The Report (large pdf), summed up in blogger speak.

Basically by the FASB relaxing mark-to-market accounting rules, our friendly neighborhood Zombie banks, otherwise known as TARP recipients, are sitting on a butt load of toxic assets that they do not want to expose because they would have to take the real losses on their books.

What's a butt load? Well, due to a lack of transparency, nobody really knows, but it's gobs. What's a gob? Well, it assuredly has a T attached to it. On page 28:

In publicly-available data reviewed by the Panel, the 19 stress-tested BHCs have reported:

Then, to make matters worse, (and this might explain why so many small banks are failing), small banks get no break on selling off their worthless loans because they are not securitized.

The nation‟s banks continue to hold on their books billions of dollars in assets about whose proper valuation there is a dispute and that are very difficult to sell without banks experiencing substantial write-downs that can trigger a return to financial instability.

Whatever values are assigned to these troubled assets for accounting purposes, their actual value and their potential impact on the solvency of the banks that hold them are uncertain and will likely remain so for some time; the degree of uncertainty is difficult for anyone to estimate confidently.

The report continues to show how TARP recipients could get themselves into further hot water under these conditions:

What COP is recommending is another round of stress tests along with transparency and start paying attention to commercial real estate. These are bullet pointed on page 62.

This graph compared current unemployment numbers with the the ones used in the stress tests. 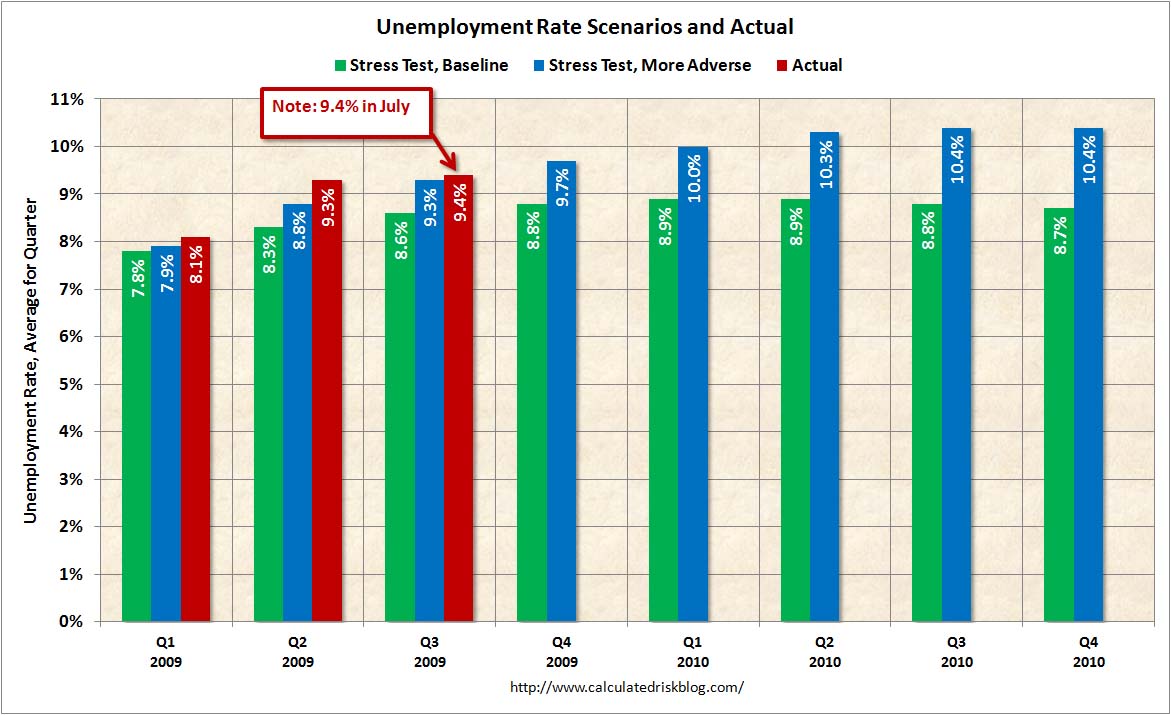 So, in spite of the positive showings in the economy, or at least the perception thereof, clearly there is a lot of risk that the financial implosion was just kicked down the road with a hell of a lot of money thrown at it.

The report also acknowledges Geithner has at least stabilized the mess and that appears to be quite true (much to my surprise!).

of this mess. If they can do that then holding these toxic assets will be OK because eventually the value will return to them. That is the assumption and the BIG gamble.

It is a gamble that the financial oligarchy wants. They know that even if things don't return to "normal" there will the gov't to bail them out again. Great gamble w/ very little downside to it. Hedge funds and private equity see this gamble and that is why they are going "all in" on the financial sector. Just this morning in FT it was reported that big hedge fund - Paulson & Co. acquired a 2% stake in BofA and holding in many other financial conglomerates and banks.

They see the gamble - acquire these companies very cheap and even if it tanks there will be some return because of gov't bailouts and the upside will be huge.

BTW, I think Prof. Warren is doing a great job but she doesn't have to use those one liners to describe the situation. She should leave that to us. She should stay above the fray and investigate.

That was on "Morning Joe", which is supposed to model the morning coffee and newspapers type of kitchen table.

Watch that entire interview, it's really informative and myself, I like it when anyone from D.C. comes up with quips, one liners and acts a little more like a regular citizen when communicating...

I don't think she has gone far enough in bluntness and it's clear she entered the wicked world of D.C. politics in all of this.

I noticed, despite COP's very good use of online media, boiling the complexity down into very understandable summaries, overviews, etc..

The actual people watching these is very low...whereas, all one has to do is go on a talk show and hits 500,000 viewers. So, TV still rules and getting the focus on TARP, auditing, monitoring, what is really going on is getting increasingly difficult. I think everyone just wishes it all would go away like a bad dream.

I think Elizabeth should be on more talk shows giving her one-liners. She is great. She doesn't pull punches, doesn't give the usual Washington double-speak, she tells it like it is.

I have been following her since she was appointed. She is superbly qualified. Unfortunately, COP has no clout.

I have also found it quite surprising how supposedly stabilized things are. But I have learned to never underestimate how much a rising stock market can blind people from the truth. None of these problems with the banks have truly been solved; they have just kicked the can further down the road. Ultimately we will have to deal with the consequences of these reckless actions.

is reflexive in nature meaning that it's prone to moments when it's increases not based on information but just a reflection of itself. It ignores fundamentals such earnings quality and fact that billions of dollar of toxic assets are still on the books with no significant improvement in economic conditions.

It just doesn't add up for me considering the amount of money we're talking about dumped into just these banks. I've been very surprised on a lot of data lately, and looking for places...was I wrong in my assumptions? How the hell is a recovery happening with that kind of hit to the economy? So on.

I'm making some assumptions, based upon much reading across the spectrum:

Assumption 1: With a report $100 to $200 trillion of toxic securitized assets exposure by JPMorgan Chase, Citi, BofA, Goldman Sachs and Morgan Stanley (note the lack of mention of any GSEs and A.I.G., etc.) things don't look too promising;

Assumption 2: The TARP funds have gone primarily to speculating, the stock market indirectly (thus pumping it up in the short term) and buy T-bills; and,

Assumption 3: Those commercial loans coming due for default - which the marvelous Elizabeth Warren mentioned (great interview, and I truly like this woman now, just as I truly admired Brooksley Born, but we know how that went)- will continue this so-called recovery phase of continuing unemployment and malaise well into the future (say 10 to 20 years plus).

I believe it's around $1.5 trillion, they vary widely but I have not hear anything like $100 trillion anywhere.

Roubini has estimated them as have others and I believe I read the writedowns so far are about ~50% or less, the rest are on the books (in mark-to-market accounting fiction land).

But of course that's not the impeding CRE implosion. Midtowng has some great blog posts on here on CRE.

My memory may be off, but wasn't that $1.5 trillion referring specifically to the credit default swap category only, not to the entire amount of credit derivatives on hand? (And just wait until that cap-and-trade legislation kicks in.)

the entire derivatives market itself, it's unknown but I recall estimates around $65 trillion. So that number is ~ what we're talking about with TARP.

I put in the post the COP reporting estimates from stress tests and I'm quoting from memory from economists like Roubini, originally it was about $3.4 trillion or so, but the actual risk as the SIGTARP reported was $23.7 trillion, at risk.

These are the ones up for PPIP that I'm talking about.

There was going to be an effort to clean up balance sheets and separate out the toxic assets. There was to be some unwinding of positions, and that was why we had to pay those obscene salaries and bonuses to people who created the mess in the first place. I have never understood why the American taxpayer has to stand behind what is a global problem, nor why some portion of the toxic assets cannot just be put up for bid to see what banks or nonbanks are willing to pay for them -- let these "too big to fail" pools empirically learn the magnitude of the risk they took. The US taxpayer should not be standing behind the speculation of multinational businesses. Let them fail just a little.

down the road. I get the impression they are trying to make the derivatives "work" and somehow be "untoxic".

Here's my question, was TARP even necessary? Yes some major financial institutions would fail but was it really Economic Armageddon as claimed?

Well, I do not want to put words into Prof. Warren's mouth here, but just watch that Morning Joe clip because this question is asked and watch the body language, squirm.

Right now it's like "oh it worked, yippee, it's all good" but to me it delayed and then on the consequences, is it truly the end of the world if Citigroup goes under?

Oh yeah, and on the Obama Administration's derivatives "regulation" - remember, the clearing house they will use will be ICE US Trust - and who owns ICE US Trust???

That’s because there’s still a world of hurt for Citi in the $83.2 billion in subprime mortgage-backed securities, corporate loans, home loans and commercial real estate mortgages that the bank’s finance team has stuffed neatly into something called the “Special Asset Pool.”

But there’s nothing special at all about these assets. This cesspool of toxic securities and floundering loans is the worst of the stuff that’s been stinking up Citi’s balance sheet.

It looks like Bloomberg is finally picking up on the Enron accounting going on at banks.


Check out the footnotes to Regions Financial Corp.’s latest quarterly report, and you’ll see a remarkable disclosure. There, in an easy-to-read chart, the company divulged that the loans on its books as of June 30 were worth $22.8 billion less than what its balance sheet said. The Birmingham, Alabama-based bank’s shareholder equity, by comparison, was just $18.7 billion.

So, if it weren’t for the inflated loan values, Regions’ equity would be less than zero. Meanwhile, the government continues to classify Regions as “well capitalized.”
...
While Regions may be an extreme example of inflated loan values, it’s not unique. Bank of America Corp. said its loans as of June 30 were worth $64.4 billion less than its balance sheet said. The difference represented 58 percent of the company’s Tier 1 common equity, a measure of capital used by regulators that excludes preferred stock and many intangible assets, such as goodwill accumulated through acquisitions of other companies.

Wells Fargo & Co. said the fair value of its loans was $34.3 billion less than their book value as of June 30. The bank’s Tier 1 common equity, by comparison, was $47.1 billion.