The Conference board has released their LEIs for August 2009. Their leading economic indicator index (LEI) is up 0.6% for August. July was 0.9% and June was 0.8% respectively.

"Since reaching a peak in July 2007, the LEI fell for twenty months – the longest downtrend since the mid 1970s – but it has been rising since April and its gains have become very widespread," says Ataman Ozyildirim, Economist at The Conference Board. "The six-month growth rate of the LEI continues to accelerate. At the same time, the downtrend in the coincident economic index, measuring current economic activity, seems to be stabilizing, with the index flat so far this quarter."

Says Ken Goldstein, Economist at The Conference Board: "The LEI has risen for five consecutive months and the coincident economic index has stopped falling. Taken together, this suggests that the recession is bottoming out. These numbers are consistent with the view that after a very severe downturn, a recovery is very near. But, the intensity and pattern of that recovery is more uncertain." 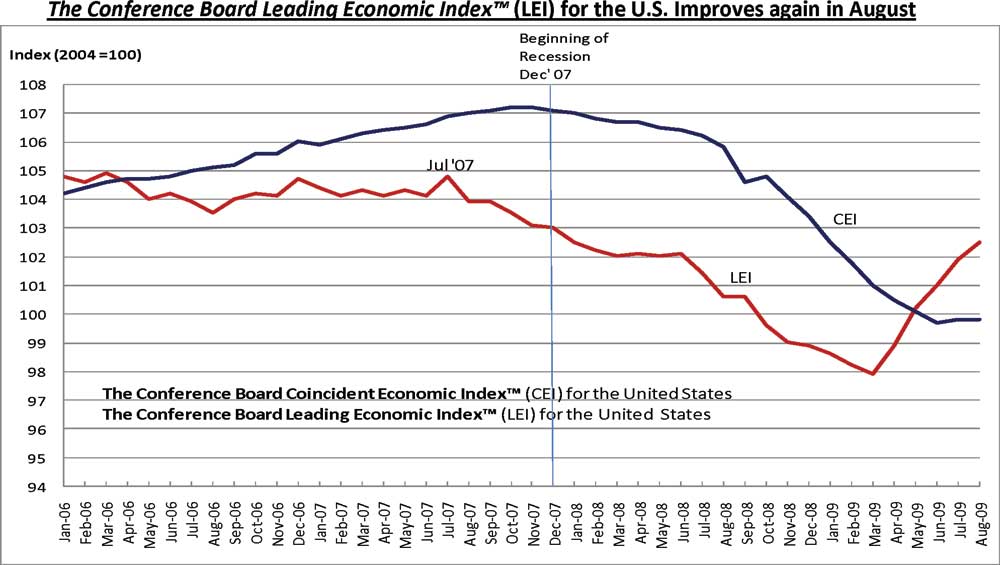 Note the slope or trend line, which is a dramatic increase, yet by absolutes, the numbers are still in recession territory (compare to December 2007).

The Conference board details their LEIs:

Five of the ten indicators that make up The Conference Board LEI for the U.S. increased in August.

and are outlined in this aptly named document Oh What.

They also give a few additional metrics on their front page, as follows:

On CEO confidence, one must wonder if they have bonus bias with such an increase, otherwise known as do you get out much?

Notice the LEIs which we call the real economy are still negative, particularly unemployment and new orders for manufacturing.

to a certain extent builder permits are reflecting back at one another. For example, if stock prices go up, consumer confidence goes up and then stock price goes up again. But there is nothing really underlying the increases such as fundamentals (corporate earnings).

I was looking at that too and noted a lot of it is perception...I haven't been tracking on earnings and 10-ks so I don't know if the fundamentals are really in alignment here.

I just saw some drip on CNBC about how awesome it was that Dell is getting into the outsourcing business, along with all of our other now destroyed tech corporations (IBM, HP) by buying Perot Systems.

The above maps is the coincident indicators, or how things are doing right at the moment. Green is good, red is bad.

Notice how most of the states are red.