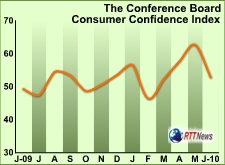 From the Press release:

The Conference Board Consumer Confidence Index® which had been on the rise for three consecutive months, declined sharply in June. The Index now stands at 52.9 (1985=100), down from 62.7 in May. The Present Situation Index decreased to 25.5 from 29.8. The Expectations Index declined to 71.2 from 84.6 last month.

Consumers’ short-term outlook, which had improved significantly last month, turned more pessimistic in June. Those anticipating an improvement in business conditions over the next six months decreased to 17.2 percent from 22.8 percent, while those expecting conditions will worsen rose to 14.9 percent from 11.9 percent.

Another animal spirit type of public perception index, the University of Michigan Sentiment Index, released last week, was up 2.4 pts from May. Although confidence rose modestly in June to 76.0 from 73.6 in May and 70.8 last June, the gain was enough to push the Sentiment Index to its highest level since January 2008. The cumulative gain from the low of 55.3 in November 2008 has restored half of the decline from the January 2007 peak of 96.9. The Expectations Index, a component of the Index of Leading Indicators, also reached its peak in January 2007—a year before the start of the recession and two years before it was declared by NBER. The Expectations Index recorded its trough in June 2008, also about one year before the end of the recession—although NBER has yet to declare an end date.
Unfortunately, during the past 12 months the Expectations Index has not posted any further gains, signaling that consumers expect a very slow pace of growth in the year ahead.

While both of these indices are glorified polls, with consumer confidence being a 5,000 per sample size and the University of Michigan sentiment index 500, it shows the high unemployment rate, never ending foreclosures and other economic malaise has come home to roost in the public's mind.

When the public feels bad about the economy, they do not consume, which affects GDP.