The Dow goes nuts! It dropped 1000 points suddenly. CNBC is reporting it was a human error, someone entered a B instead of a M for millions. Update: CNBC (what a surprise), is full of it. There was no typo which caused the biggest DOW drop in history. Citigroup, the unnamed typoist, is fairly irritated about it too for they looked over their trades and there was no typo. Makes sense too. One typo causes a 1000 point drop? Uh, really? Look to high frequency flash trading (HFT) as a bigger culprit. 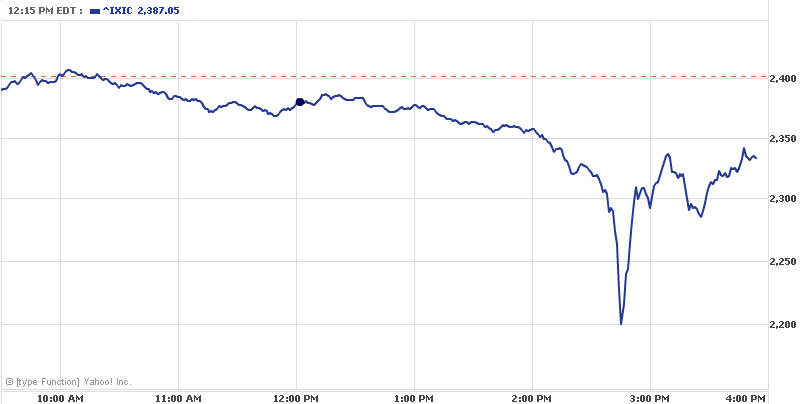 Supposedly there is no error being reported by the NYSE and others and CNBC is speculating the error is connected with derivatives, which caused a chain sell off reaction.

Currently no one knows the answers but there are all sorts of erroneous and suspect trades at the time of this post.

NASDAQ just posted a notice on their website saying they are looking into trades in cooperation with other exchanges.

Others are saying the crash is due to the Greece crisis, the concern on contagion and the Euro.

More interesting are the financial/economic sites that 100% crashed. They are, Bloomberg, Zero Hedge, Yahoo Finance. There are probably more but I have a hard time believing all of them couldn't handle the increased traffic spike, especially yahoo and even Google finance loaded slow.

Bloomberg is now reporting the NYSE Eurostat is claiming there were a number of erroneous trades, in particular Procter and Gamble dropped 37%.

What happened today in P&G for instance, the bad print was on Nasdaq, not here.

Update: New rumor that the European markets are having some sort of liquidity issue, i.e. Greece and contagion.

Update2: Seems CNBC of all organizations is getting to the bottom of it. The original post, a trader error is looking good for just the sudden 1000 point drop at 2:30-2:48. So far it hasn't been publicly identified but it is somewhere around Protector & Gamble. But that said, the overall drop, minus the spike, is the Greece debt contagion spread. The question is how many other sovereign nations, especially European banks are exposed to Greek debt.

Bloomberg is reporting the SEC is launching an investigation on some seriously funky trades:

The Securities and Exchange Commission aims to determine if market participants accidentally or maliciously entered orders that derailed normal trading, the people said, declining to be identified because the inquiry isn’t public. The agency will also examine if controls to prevent the rout from snowballing weren’t in place at exchanges and firms.

Yves Smith is saying retail (the rest of us little people) traders were shut out:

another side effect of today’s equity market gyrations is further distrust in the markets, particularly by retail buyers. I am told that various retail trading platforms were simply not operating during the acute downdraft and rebound. I couldn’t access hoi polloi Bloomberg news or data pages then either. The idea that the pros could trade (even if a lot of those trades are cancelled) while the little guy was shut out reinforces the perception that the markets are treacherous and the odds are stacked in favor of the big players (even though we all understand that, it isn’t supposed to be this blatant).


“While our policy is not to comment on individual participation in our markets, in light of volatile market conditions, CME Group confirmed that activity by Citigroup Global Markets Inc. in CME Group stock index futures markets does not appear to be irregular or unusual in light of market activity today.”

So relax. Take it easy. And don't forget to send more of your money into your 401k so Wall Street can continue playing games with it.

This is the problem with D.C. generally. They completely (IMHO) discount, ignore, belittle, send to the basement, the backroom, STEM people, i.e. the geeks, the engineers, the system administrators, the very ones who could design monitoring systems to monitor the rise in the machines. Over and over again, we see engineering systems, HFT, CDOs, CDSes, structured finance, derivatives, software, etc. being used by the 6 megas for a variety of things, including causing massive immediate contagion and financial meltdown. I'm going to bet money this comes down to institutional trading platforms with a host of algorithmic triggering rules, built in, automatically which caused an immediate plunge cascade, i.e. financial contagion build right into the software.

Yet....how many hearings has Congress even had on the technology, the theory, the algorithms and mathematical end? I think we got one, fairly vague in the House Science committee, dutifully ignored as they do a lot of those hearings.

They don't get it. If one uses geeks to build financial systems, one needs geeks to tell you how to build system safe fails or problems therein, plus really financial regulatory cybercops, automatic algorithmic cybercops. I know they have some, but obviously not enough prevention (pre-crime anyone?)

It's like high school, but Goldman Sachs sure knows how to use a geek. Except for Fabulous Fab who couldn't keep his mouth shut, I noted one cannot even prove anything due to the structures of CDOs.

Nice gig at Goldman, wish I had applied frankly! While high tech is busy firing the most accomplished engineers in the world, there was the financial sector, snapping 'em up. Let's see, a Physics PhD might pay $43k if very lucky, hmmm, GS is paying $180k base never mind options and bonuses? HP guts it's research lab, engineers on food stamps. BTW: Citigroup offshore outsourced it's entire IT dept.., but it's unclear if they labor arbitraged their geeks. It's not like the financial sector respects the geeks either here but GS sure did pay handsomely to design derivatives and platforms.