The FDIC has released their quarterly banking profile. 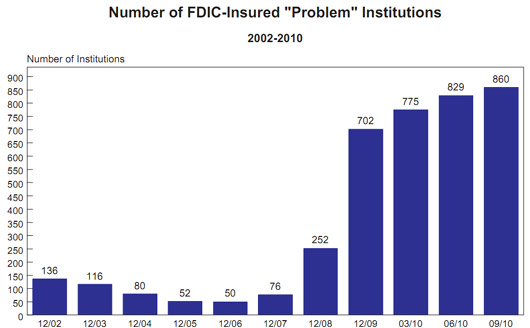 The number of insured institutions on the FDIC’s “Problem List” increased from 829 to 860 during the quarter. This is the largest number of “problem” institutions since March 31, 1993, when there were 928.

Total assets of “problem” institutions declined for the second quarter in a row, from $403.2 billion to $379.2 billion. The number of employees (full-time equivalent) increased for a second consecutive quarter, after falling in each of the previous 12 quarters. The 0.4 percent (8,195) increase lifted the industry’s total employment to 2.04 million, which is still 8.2 percent below the peak of 2.22 million reported in first quarter 2007.

The FDIC doesn't publish problem banks, but bloggers do. Calculated Risk periodically prints up an unofficial list. The unofficial problem bank tally, creating by external groups, not affiliated with the FDIC, is 903. Most problem banks fail. 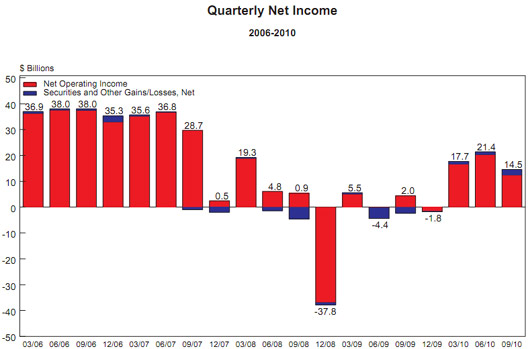 Net income for the 7,760 insured commercial banks and savings institutions reporting quarterly financial results totaled $14.5 billion, a considerable improvement over the $2 billion reported a year ago.

Third quarter net income was below the $17.7 billion and $21.4 billion reported in the first and second quarters of this year, respectively, but the shortfall was attributable to a $10.1 billion quarterly net loss at one large institution that had a $10.4 billion charge for goodwill impairment. Absent this loss, third quarter earnings would have represented a three-year high. Almost two out of every three institutions (63.3 percent) reported higher net income than a year earlier, and fewer than one in five (18.9 percent) was unprofitable. This is the lowest percentage of unprofitable institutions since second quarter 2008. A year ago, more than 27 percent of all institutions reported negative net income.

The deposit insurance fund (DIF), increased 13 basis points to -0.15% and is now only in the hole $8 billion. Below is the graph of DIF reserve ratios. 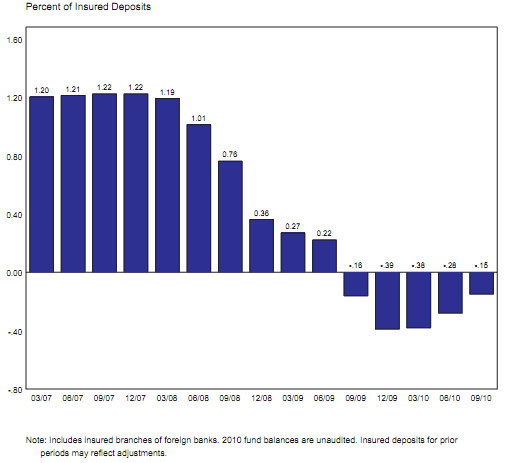 The Deposit Insurance Fund (DIF) balance increased by $7.2 billion during the third quarter to -$8.0 billion (unaudited), the third consecutive quarterly increase following seven quarters of decline. Assessment income of $3.6 billion and a $3.8 billion negative provision for insurance losses were the primary contributors to the improvement in the DIF balance. Interest earnings, combined with unrealized gains on available-for-sale securities and other net revenue, boosted the balance by another $0.3 billion. Operating expenses reduced the balance by $0.4 billion.

The report sure is peachy cheery in comparison to the never ending foreclosures happening and how that will affect banks. If you're wondering why this comment, check out the below graph on the growth rate of residential loans. 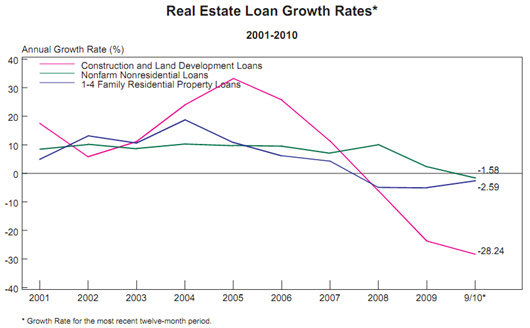 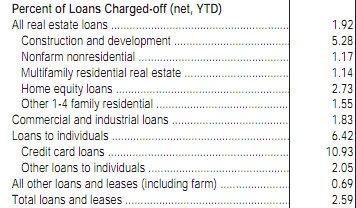 All graphs were taken from the FDIC graph book. The FDIC has created 83 pages of graphs, so the link is worth looking at and there is a video conference available as well from the FDIC.

Our 18 year old business is capitalized by commercial and person property. As most, recent appraisals place the value below loan amounts. While our business has sagged mostly due to working capital going to debt reduction, we have an investor ready to inject $2,000,000 with a plan to grow our business. All we need to close is for the bank to agree to some very reasonable renewal terms. The bank, who just took over my old bank with FDIC as their partner, likes the deal. They claim it is now up to FDIC to approve. I think what they mean is that the FDIC agrees to continue the five year loss/share arrangement (80%) under the terms of our deal structure. If FDIC says no, the bank could still say okay but without the FDIC parachute. Actually, I think the bank, since they bought my loans at a discount, could make money if we chapter 7 or 11. In the end, FDIC holds nine lives and a viable business in the balance not to mention millions in more foreclosures that do not need to happen. Any suggestions out there?