Q3 2012 real GDP shows 2.7% annualized growth, revised from 2.0% in the advance report. There was a significant upward revision to inventories, yet consumer spending was revised down. Exports were revised up as trade statistics became more complete. Q2 GDP was 1.25%. The below table summarizes the revisions to Q3 GDP components from this revision and the advance report. These revisions are from a percentage point contribution to Q3 GDP growth. We expect exports and imports to be revised again for there is lag in trade statistics coming into the Census.

Imports and exports, M & X are greatly impacted by real values and adjustments for prices from overseas and they are usually revised again in the next estimate. Import growth in real dollars has slowed, subtracting only -0.02 percentage points from GDP growth while export growth increased. Exports were significantly revised up as trade data comes in from various ports. Exports still are much less of a contribution to GDP than in Q2. The below graph shows real imports vs. exports in billions. The break down of the GDP percentage change to point contributions gives a clear picture on how much the trade deficit stunts U.S. economic growth. 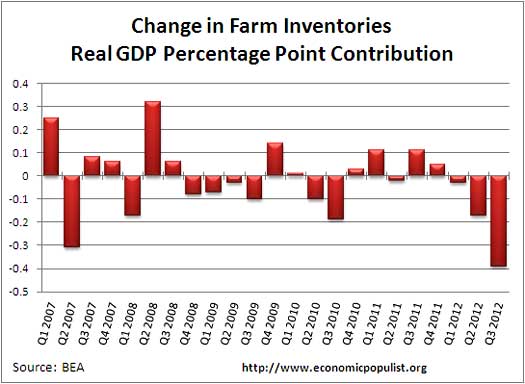 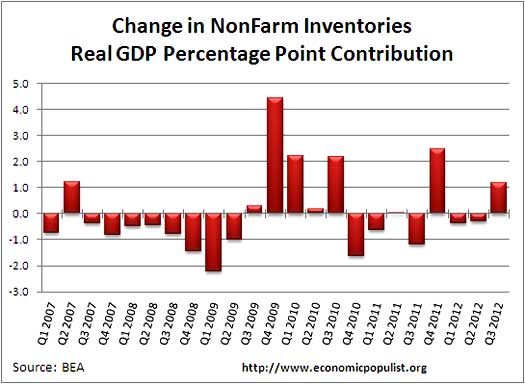 Motor Vehicles as a whole was revised significantly, from a –0.47 percentage point GDP contribution to -0.24. Computer final sales, contributed to GDP by 0.12 percentage points. These two categories are different from personal consumption, or C sub-components, such as auto & parts. These are overall separate indices to show how much they added to GDP overall. Motor vehicles, computers are bought as investment, as fleets, in bulk, by the government, as well as part of consumer spending, government spending and so on. Below are real final sales of domestic product, or GDP - inventories change. This gives a better feel for real demand in the economy. This is because while private inventories represent economic activity, the stuff is sitting on the shelf, it's not demanded or sold. While real final sales increased, it was revised down for Q3, from 2.1% to 1.9%. In other words, with this revision demand became weaker than in the advance report. Here is our overview for Q2 GDP previous estimate and other reports on gross domestic product can be found here.

Folks, if you see an error or a confusing statement, please let us know. GDP is a massive statistical release and we hand calculate percentages not covered by other sites trying to amplify and illustrate the BEA statistical release.

The idea here is to amplify the report and we want to know if we have succeeded in that effort.