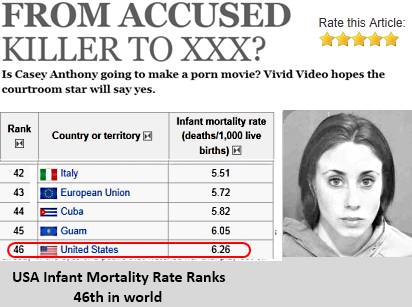 Who knows if Casey Anthony is guilty or innocent? Even Casey might not know at this point. We do know one thing, without any doubt. As our economy and nation crumble around us, we're being amused to death by the corporate media. They've got good reason to keep the headlines on Casey. Absent a major distraction, there might be a focused look at the misrule and looting of this country for the past decades that has created the real threats to the health of children.

"Infant mortality is an important indicator of the health of a nation, and the recent stagnation (since 2000) in the U.S. infant mortality rate has generated concern among researchers and policy makers." Morbidity and Mortality Weekly Report, CDC, November 2009

The run rate for deaths for children less than one year of age, infants, is around 30,000 per year. Have we heard that figure from corporate media lately? Our international ranking fell for infant mortality from 12th in 1960 to 23d in 1990 and to 29th in 2004. The US is currently ranked at number 46 in the world in preserving the lives of its infants.

Something is very wrong with the care of children, infants in particular. Why did the MMWR of the Centers for Disease Control say infant mortality is an index for "the health of a nation"?

It's simple. Pre and post natal care are well defined health care functions. Pregnant mothers who eat properly, avoid toxins (including all "substances"), and receive proper medical care are much more likely to have a live birth and successful infant period for their child. CDC estimates that expanding the reducing the rate of preterm births would save the lives of 8,000 infants a year (of the 30,000 lost to infant mortality).

There is also a relationship between demographic factors and infant mortality:

"In the United States, historically there has been a negative relationship between infant mortality rates and economic factors such as average wage." Wikipedia (research summary)

Tens of millions of citizens are denied proper medical care. This has an impact.

Lack of insurance is highly related to poor medical care.

One of the outcomes is that 8,000 infants die each year because we can't get it together to secure the right to life of the weakest among us.

When is the last time you heard a politician lose it in a rage over 8,000 dead infants each year?

But how long will it be until we hear the corporate media and screaming heads on cable news ranting on about the next isolated outrage against one child? How long will that media circus last?

I find it ironic that the latest word on life and death issues in the public dialog came from Casey Anthony's defense attorney. In his post-trial press conference, Jose Baez said, "We all need to stop and look and think about a country that decides to kill its own citizens…It's disgusting." July 5 (4:20 on tape)

Mr. Baez was talking about the death penalty but the words apply to the needless deaths of infants through social and economic policies that create the conditions for needless loss and suffering.

The facts on infant mortality are well known in our national and state capitals. It's no secret that the problem is getting worse by the decade. The solutions are no secret either. The entire process of denying care is an open book. No conspiracies here. Just intentional child neglect by those who claim to defend children.

Right, while the media works up America in a frenzy over one crime, the statistics of people suffering in the U.S. are ballooning, including child poverty. Now I have issue with illegals coming here, having a lot of kids and living off of social services. Yes, I know that's a GOP talking point but the statistics are there to back it up.

That said, focusing on that masks the reality plenty of white children are in poverty. If someone is a single mother, they are simply screwed in this country in terms of trying to raise their kids and have a career. There is little support for families and reports of discrimination against single mothers to even get hired.

How long has this ridiculous story dominated the headlines on all news outlets? I'm fairly certain it's over 14 days where it's crowded out any other story and really going on 3 years.

Mexico has gone through periods of phenomenal economic growth, when the government was relatively focused. The people are highly industrious. When the government is as it is now, with 50% dire poverty, what are the options? The employers here love the arrangement since there are no obligations to do much for employees or follow any labor regulations. The Populist manifesto I discussed is just the type of things The Money Party hates. Rational demands for respect for labor, whomever is doing the work. If our role was protector of the hemisphere, we'd make sure that Mexico wasn't selling off it's treasures on the cheap to others and also we'd stay out of their elections, in particular, and their politic in general other than to urge clean government. Of course, that would presume clean government here...NOT!

We could have a 100,000,000 person nation humming along at 7-8% growth, a great neighbor and trade partner. But we're too caught up in the same corruption that goes on in Mexico to realize that. It's a limited pie with ever diminishing portions. There is no creativity in The Money Party approach.

I wrote this in response to reading your article on the general media circus.

I it almost axiomatic to assume that when someone says they're all for children, the kids will be neglected and when they're all over quality education etc., they're really talking about starving the school system.

From the Populist manifesto:

"The newspapers are largely subsidized or muzzled, public opinion silenced, business prostrated, homes covered with mortgages, labor impoverished, and the land concentrating in the hands of capitalists.” 1892 platform

I don't like to focus on ethnicity since we have so much special interest based politics, but the black unemployment rates and poverty rates are through the roof, 16.2% officially and black teens have massive unemployment.

This gap has been there forever but from 2007 it widened.

It has gone on so long that the tired excuses, based on bigotry, are not even uttered out loud by the bigots. It's a function of class and discrimination. When it comes to running things, I say let's apply this standard from Matthew:

Matthew 7:31 For the day soon cometh, that men shall come before me [the people] to judgment, to be judged according to their works.

I'm not advancing any religion here, I just think this says it so well. Lots of talk about the Calvinist ethic in the past. Well, lets apply it. Judge the "rulers" by their "works" - in their case, non stop bad works!

We've known the impact of class and race on employment and pay for decades. But it's like infant mortality, the longer we go the worse it gets. From those rankings over time, we're headed for #69 in the world in infant mortality by 2015/16. What the heck kind of record is that? Is this some new movement, right to death?