It's simply a failure of law. Barry Ritholtz wrote a admonishment of the Obama administration and state attorney generals for buying into the 50 state mortgage settlement pig in a poke:

We never want to see an innocent party “accidentally” evicted from a home. The legal system has evolved so this has become a “legal impossibility.” Imagine returning home from work or vacation to find the front door padlocked, the belongings strewn all over the block, a big orange sticker screaming “FORECLOSED” on the garage door, with an auction sign in the front lawn. Now imagine that this occurred even though you are not in default or even delinquent on payments. Thanks to the robosigning banks, this legal impossibility has happened repeatedly, even to homeowners who paid cash for their houses and had no mortgages. Imagine that — foreclosed with no mortgage.

Pretty incredible huh? It used to be no one could simply just take your home. Such a violation of personal and property rights was unheard of. Now the stories are so routine, the press barely covers them.

Bloomberg Law interviewed an on fire Ritholtz, who explains, in simple English, why this settlement is such a big deal. Literally the settlement throws out 1000 years of individual property rights, law and is a loss of personal freedom you really need to pay attention to.

Now we have a situation where former homeowners, already foreclosed on are still not getting the cancelled note. Not getting the entire note cancelled opens them up for additional debt claims against them. Lovely.

A “mortgage” consists of two instruments: a promissory note, which is a IOU, and a lien against the property, which is referred to as a mortgage (in non-judicial foreclosure states, they are typically called a deed of trust and confer somewhat different rights, but we’ll put that aside for purposes of this discussion).

What appears to be happening on all too often in Florida is that when borrowers signed warranty deeds in lieu of foreclosure when they can no longer keep these homes, they often get only a satisfaction of mortgage, not a cancelled note. This is not what is supposed to happen. When a borrower deeds his property to the bank, the objective of the exercise is to cancel the debt. If the note has not been extinguished, it is referred to as a “zombie note”.

The Obama administration recently let banks have even more free money, basically for doing nothing.

he Obama administration announced Friday that as part of a recent $25 billion settlement with big banks, the government will release money withheld from Bank of America and JPMorgan Chase for doing a bad job modifying mortgages under the administration's signature anti-foreclosure scheme.

Banks participating in the Home Affordable Modification Program receive incentive payments for lowering eligible borrowers' payments in order to prevent foreclosure. The program has fallen far short of expectations, and more borrowers have had their modifications canceled than remain in the program.

The Treasury Department, which oversees the program, started withholding incentive payments from several banks last June. On Friday, the department said $81.7 million will be released to Bank of America and $89.1 million will be handed over to Chase.

This is unreal. While home prices are still out of alignment with wages and income, 22.8% of all mortgages are underwater in Q4 2011. 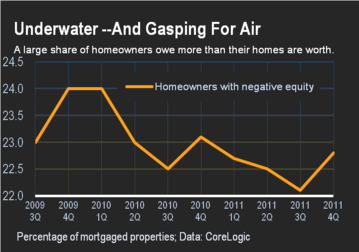 Nevada is off the charts with 61% of mortgaged properties being underwater. Arizona has almost half, 48% of mortgaged homes, with negative equity.

All it takes is another economic bump in the road and foreclosures will increase. When one owes more on a home than it's worth, that gives further incentive to just let go of the home and simply walk away from the mortgage. Add to that a glorified license to steal, due to this mortgage settlement, it's clear the #1 safe investment for most people in America, their home, is simply no longer.

Many are pointing to the bank bail outs and never ending free pass as prime examples of how the banks run the government and have subverted and corrupted even the rule of law. If the law interferes with their bottom line, out it goes. Just another stepping stone in the great fleecing of the American people.