The U.S. December 2016 monthly trade deficit decreased 3.2% from last month and now stands at $44.3 billion.  For all of 2016, the trade deficit increased 0.4% from the year previous.  While that doesn't sound like much, the total amount is -$502.3 billion.  This is in spite of petroleum imports being much less of a trade deficit factor.  China alone is almost half of the trade deficit.  While pundits proclaim Trump will start a trade war, with these kind of figures, surely that war is long over and America obviously surrendered. Graphed below are imports and exports graphed and by volume since 1995 and note the global trade collapse in 2009.  For the year the goods trade deficit decreased by -1.6% to $750.1 billion while the services surplus shrank by -5.5% to be $247.8 billion.  Imports are in maroon and exports are shown in blue, both scaled to the left.

Below are the goods import monthly changes, seasonally adjusted.  On a Census basis, overall imports increased by $3.7 billion to $187.241 billion.  Passenger car imports was $1.351 billion more in just a month to $15.3 billion.   Imported passenger cars now exceeds crude oil imports, which were slightly over $10 billion.

Below is the list of good export monthly changes, seasonally adjusted, by end use and on a Census accounting basis, increased by $4.933 billion to $126.581 billion.  The reason for the good showing is an almost two billion dollar increase in aircraft and aircraft engines exports. 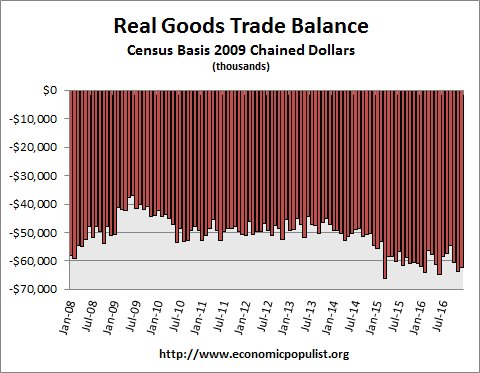 Oil or real valued petroleum trade deficit has just plummeted and is now a monthly -$9.495 billion for December.  This is a drop of 9.5% from November.  Real means the balance figures are adjusted prices using chained 2009 dollars so inflation is not in the mix.  Not seasonally adjusted a barrel of crude was $41.45 and barrels for the month were 238,333. 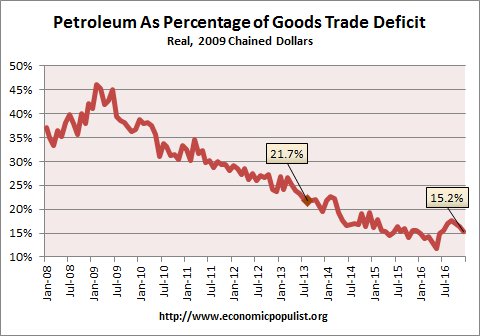 If the Trump administration gets serious on bad trade deals, there should be movement in the trade figures.  That said, this is pretty awful, so honestly, how could it get much worse?  It could instead get better.  Here are other trade deficit overviews, data unrevised.

November trade deficit was revised higher from the originally reported $45.24 billion to $45.73 billion, and trade figures for every prior month of 2016 were also revised, meaning that prior quarter over quarter figures for GDP will have to be revised as well...in the advance report on 4th quarter GDP of two weeks ago, our December trade deficit was estimated based on the sketchy Advance Report on our International Trade in Goods which was released just before the GDP release...that report estimated that our December goods trade deficit was at $65.0 million, on goods exports of $125.5 billion and goods imports of $190.5 billion...this report revises that and shows that our actual goods trade deficit in December was at $65.7 billion on adjusted goods imports of $192.6 billion and adjusted goods exports of $126.9 billion...in addition, the November trade deficit was revised higher by nearly $0.5 billion…just those two revisions from the previously published data mean that the 4th quarter trade deficit in goods was roughly $1.2 billion more than was included in last week's GDP report, or roughly $4.9 billion on an annualized basis, which would subtract about 0.11 percentage points from 4th quarter GDP....