Below is a graph of housing starts going back to 1960. One can see how badly the bubble burst on residential real estate. New Residential Construction has a margin of error often above the monthly percentage increases. January, for example, has a error margin of ±14.2% percentage points on housing starts. Below is the monthly change so one can see the wild fluctuations. Additionally, as we see in the above graph, the monthly percentage change is quite noisy, even though this monthly economic report is seasonally adjusted. This is why it's better to look at the overall unit levels instead of the month to month percentage change. Supposedly the claim for housing start increases is unusually warm weather in January. Housing Completions decreased by -12.0% and are now up 4.1 from December 2010. This number reflects housing starts earlier reported.

This report has a large variance, so to establish a trend line one must take into account months of data. This report is also seasonally adjusted and residential real estate is highly seasonal.

Some things to take away from this report is multi-family, otherwise known as rental units, are really taking off and no surprise there since the mortgage lending standards are so tight and there are so many foreclosures. A silver lining to the destruction of the American Dream.

Another point is the traditional house, single family is D.O.A., although now classified as Zombies. Below is the graph of single family housing starts on a monthly basis. I recommend Calculated Risk, the uber site on housing data, for more graphs and analysis.

Some are making the divergence between housing starts and completions a big deal. It's not really. Completions lag starts and earlier starts were at all time lows. There are also starts back logs which are probably worked off by now. This report has large error, plus is seasonally adjusted. The weather this winter has been unusual, which also can throw off starts vs. completions. Below is a graph to show the divergence of the two metrics isn't that unusual on a month per month basis. 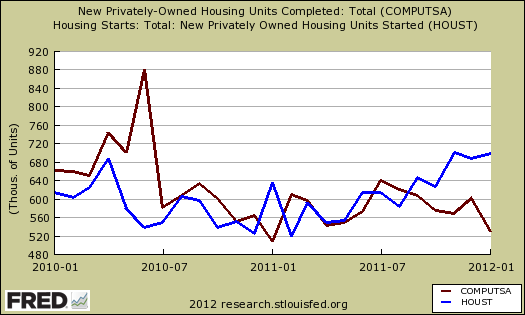 The war on the middle class - 228347 reads
House discusses 401k/IRA confiscation - 238306 reads
The Economic Populist Site Rank, Statistics and All of That Jazz - 134963 reads
How Many Jobs Are Needed to Keep Up with Population Growth? - 265542 reads
Progressive Alternatives To The Current Economic System - 18487 reads
Fired America - 45674 reads
U3 and U6 Unemployment during the Great Depression - 257490 reads
Help Build The Economic Populist - 60478 reads
A Proposal for True Keynesian Economic Stimulus - 26764 reads
S&P Downgrades the United States to AA+ - 34002 reads