From his blog: "It’s now possible to sell a new product to hundreds of millions of people without needing many, if any, workers to produce or distribute it ... The ratio of producers to customers continues to plummet ... New technologies aren’t just labor-replacing, they’re also knowledge-replacing ... When more and more can be done by fewer and fewer people, the profits go to an ever-smaller circle of executives and owner-investors ... That means most of us will have less and less money to buy the dazzling array of products and services spawned by blockbuster technologies — because those same technologies will be supplanting our jobs and driving down our pay ... A future of almost unlimited production by a handful, for consumption by whoever can afford it, is a recipe for economic and social collapse."

Mister Reich goes on to make this analogy: "Imagine a small box – let’s call it an iEverything – capable of producing everything you could possibly desire, a modern day Aladdin’s lamp. You simply tell it what you want, and – presto! – the object of your desire arrives at your feet. The iEverything also does whatever you want. It gives you a massage, fetches you your slippers, does your laundry and folds and irons it. The iEverything will be the best machine ever invented. The only problem is, no one will be able to buy it. That’s because no one will have any means of earning money, since the iEverything will do it all."

Maybe one day iRobots will also build themselves... 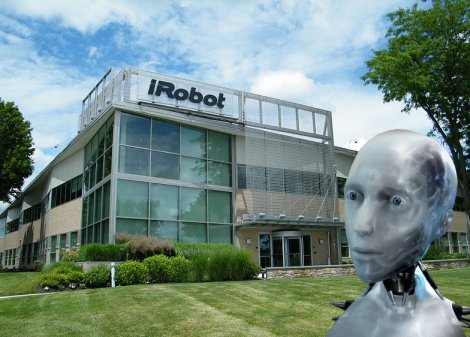 From a recent VOX study on Robots: "We see a more nuanced picture when we break down employment (and the wage bill) by skill groups. Robots appear to reduce the hours and the wage bill shares of low-skilled workers, and to a lesser extent also of middle skilled workers. They have no significant effect on the employment of high-skilled workers." (No robotization without representation! —  "Luddites weren't wrong about losing their jobs, they were just wrong about the economy losing jobs in aggregate." ~ Dietrich Vollrath)

But can we all be high-skilled workers? Can we all even afford to go to college? And if so, are we all smart enough to attend a school of higher learning? Can we all acquire a Ph.D in some STEM skill? Will only the very highly-skilled workers be able to obtain a job that pays a living wage?

This is what's now happening with lower- and middle-skilled workers: Foxconn, a Taiwanese company operating in China that manufactures electronic devices for American companies (Apple, etc.), is looking to replace its one million workers with robots. Evidently, first Americans were paid too much, now the Chinese are. And eventually, so will those in Cambodia and Vietnam. As of 2013 Nike has 777 factories in 43 countries employing 1,009,496 workers. Just in Vietnam alone Nike has 71 factories.

Other than other Asian countries (such as Vietnam and Cambodia), will the next round of offshoring go to Africa? In his post, What Path for Development in Africa -- and Elsewhere? Tim Taylor writes: "The issue isn't that manufacturing itself is going away, but that industrial robots are reaching the point where setting up a high-tech highly automated manufacturing plant is looking better and better compared to setting up a plant that relies heavily on low-wage human labor ... Many of Africa's workers are ending up in the service sector, like workers in countries all around the world. But at least so far, the services sector has not served as the primary basis for a growth miracle in any country."

Dean Baker: "The data indicate that we are seeing a slowdown in technology replacing labor (which should allow for rising living standards) rather than the speedup in the robot story."

My comment for Dean Baker: We now may have a zero sum situation, where domestic workers (displaced by technology and forced into lower-paying jobs) can no longer afford the goods being produced by the robots. The job creators are putting out more product with less overhead, but their previous employees (now working at places such as McDonald's or Wal-Mart) can no longer afford to buy their widgets. So the job creators are forever looking for more "emerging markets" to sell their products.

First, they enable them as "consumers" with jobs offshored from the US (to give them a paycheck), then they sell their stuff to them. These new consumers, in turn, pay taxes to their government; whereas, our workers (with reduced wages) are paying less than they would have.

Take China for example. Look at their GDP and infrastructure spending compared to ours over the last 30 years. They now have 500 million in their middle-class, and that's expected to rise to 630 million by the year 2022. But if robots come to dominate the low- and middle-skill job market, China will also most likely see a decline in their middle-class as well — the way the U.S. first did. (Maybe the iEverything will one day be made by iRobots in China.)

It was reported by some of the "older" cocktail waitresses at the Golden Nugget that, back in the 1980's, Las Vegas hotel/casino owner Steve Wynn once installed a prototype machine for dispensing drinks in one of the service bars. At the time, it was a total disaster, so the machine was removed and the idea was scrapped. But technology has come a long way since then, and if it were possible and cost-efficient today, there's no doubt that service bartenders would be replaced with machines.

And in the same way IT workers were displaced with H-1B workers and offshoring for lower wages, bartenders would also be looking for new jobs at places like McDonald's and Wal-Mart — until such a time when even those jobs can also be replaced by automation (the same way some cashiers had lost jobs to the self-check-out machines — or the way manufacturing workers lost their jobs to offhoring.) 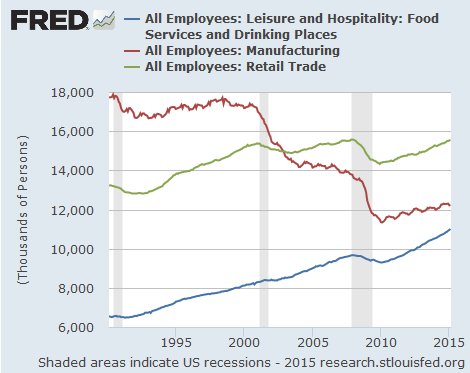 Dancing with Robots: "Most Americans enjoy the new products and services that are fruits of technological advances. But technological change has also created tremendous dislocations in labor markets, especially the elimination of routine cognitive and routine manual tasks that provided work for generations of high school graduates. These changes will continue in the foreseeable future, increasing the importance of providing all American children and youth with foundational skills needed to prepare for jobs in well-paying expanding occupations. [Such as Ph.Ds in STEM skills?] The extent to which the country makes progress in accomplishing this will determine to a large extent whether the American dream of upward socioeconomic mobility is part of the nation’s future and not just part of its past."

If all the new technology is only economically benefiting those at the very top, and only benefiting those at at bottom as end-users (if they can even afford to buy a iRobot or an iPhone or an iEverything), then a basic income will one day be needed by the masses so that they can sustain themselves. Even if the entire labor force had a Ph.D., there would not be an equal number of jobs that required a Ph.D. — and we'd only end up with a lot of people with Ph.D.s working at McDonald's and Wal-Mart. And even if all those jobs were full-time (with benefits paying a decent middle-class wage), McDonald's and Wal-Mart doesn't need 155 million employees — and we won't need that many iEverythings.

The "job creators" will always do everything possible to eliminate jobs (and/or lower wages), to lower their overhead and fatten their profit margins. Multinational corporations have no duty to domestic workers of any nation, because corporate profits have no ethical, patriotic and moral bounds — or boundaries.