On cue, economic forecasters have been flourishing their recession trumpets, sounding a symphony of predictions that put the odds of a U.S. recession in the neighborhood of one in three over the next twelve months. In this Economic Letter, we join this ensemble, updating the recession probabilities provided last year in Berge and Jordà (2010). In that Economic Letter, we put the odds of recession at about one in three by the end of the summer of 2011, rising to even odds of one in two toward the first half of 2012.

Hark! The Herald Angels Sing but not to an economic rebirth, oh no, instead more voices join the second coming recession chorus. Flip a coin, we have a 50% recession probability for early 2012. 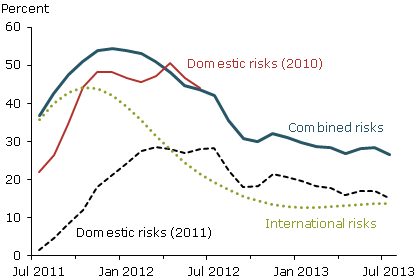 September data shows moderating growth in both the LEI and the CEI. The weaknesses among the leading indicator components have become slightly more widespread in September. Moreover, the CEI suggests current economic conditions have been slow, with weak gains in all four components over the past six months. The slow pace in the LEI suggests a growing chance that this sluggish economy is going to be here for a while.

So, when one adds contagion to the mix, we get an increased probability of a second recession. One of the more SF Fed's research interesting aspects is how they show economic contagion has actually happened for the last 140 years. Yeah, but how about contagion intensity researchers? After all, U.S. banks have exposure to Europe through derivatives.

The authors acknowledge more and more business cycles may predict economic growth, but that has little effect on the millions thrown out of work. Still, they cling to the belief GDP > 2% might just trickle upon the U.S. workforce and generate jobs.

When millions of workers are unable to find a job during a period of expansion, it seems little more than an academic exercise.

Personally, I'd like to see much more analysis on global labor arbitrage to explain why, even with economic expansion, we're not seeing corresponding job growth.

A recession here, a recession there -- pretty soon it adds up to a Second Great Depression.

Ancient Chinese curse: "May you live in interesting times!"

That said, what does one call it when GDP is not positive enough to generate jobs? Or the fact many researchers say some of GDP is erroneously attributed do to offshore production, up to 1% per quarter (annualized)?

The NBER defines these cycles and does not actually define a "double dip". Another controversy is how many economic indicators don't truly capture what's happening to the U.S. workforce, middle class, esp. when they classify an economic cycle period.