It seems House Democrat Peter Defazio (OR-4th), really likes the Republican Jobs Plan, otherwise known as Snakes on a Plane. Watch his praise and approval below!

Yes, that's right. It's so ridiculous Republicans are upset about placing restrictions on importing dangerous snakes. There are 100,000 Burmese Pythons running around the Florida Everglades eating everything from your pet fluffy to electric blankets.

To make matters worse, all the parts of Obama's jobs bill we know will actually destroy jobs, such as bad trade deals, or even more economically devestating, open the door to destroy social security, are expected to pass. Any idea that would actually work, forget it, Congressional leadership or this administration won't consider it.

Not to be outdone by those GOP economic creationists, claiming snakes imported on planes can help the economy, if it weren't those pesky regulations stopping them, the WTO went and killed flipper:

Today, U.S. efforts to reduce dolphin deaths by corporate tuna fishers through dolphin-safe labels on tuna were found to violate the WTO. This follows last week's ruling that U.S. efforts to reduce teen smoking violated the trade organization's rules. These smackdowns of major consumer regulations will be followed by a third in the near future, when the WTO is expected to rule against country of origin labeling for beef.

This is actually an extension of an earlier ruling and the below video clip uses dolphins to explain how the WTO literally overrules American sovereignty.

This is the problem, there is no logic, reason, honor, and especially no calculators in Washington. It sure doesn't help when it's looking bad the President of the United States is connected to a green job hype implosion, taking with it half a billion dollars, but we said that about the first Stimulus.

Just like I want to know the ingredients in my food, and whether it was grown organically, I want to know what country it was produced in. This is so important because many countries don't have the high level of food safety standards that America has. It could be unhealthy to say the least to eat food produced in these countries.

America must leave the WTO. How Americans want their food labeled is none of the WTO's business.

after congress does away with the EPA and FDA, our food supply will be safe as melamine milk.

There are many more rulings like this, killing endangered sea turtles is one that sticks out, but the inability of a nation to even enact their own environment protections, safety protections just takes the cake.

Anyone notice one the U.S. joined the WTO the nation has been on a steady downward spiral for the most part? So, it's not exactly helping the American people economically for the most part.

All of these trade agreements need to be cancelled, renegotiated to real trade that puts the nation and people of the nation first.

I've not been one to call for WTO withdrawal as others have been but this one takes the cake.

Add to that, I found Snakes on the Plane to be so ridiculous, so absurd, so out of the planet by any stretch of representational government, I fear what this Congress would do generally.

It seems our government is either corrupt, crazy or both. We have a jobs crisis so bad it's bringing down the entire economy and these people are holding hearings on snake & reptile imports. America has plenty of snakes in the grass and most of 'em are slithering around in the halls of Congress.

As long as MNCs have the same rights as natural persons (citizens) and can make unlimited contributions to political campaigns in secret ... for that long and no longer ... USA will continue under the yoke of the WTO, the Communist Party of China and other corporatist regimes, regardless of what they call themselves.

The Citizens United decision may not be the last word on this topic! Securities and Exchange Commission could right now require disclosure of political spending by multinational corporations, thus facilitating action by shareholders to sign off on such spending.

Not only would this SEC action advance both democracy and economic populism, it would also be in the best interests of shareholders and investors. The point is brought home in recent Washington Post article by John C. Coates (Harvard Law School) and Taylor Lincoln (Public Citizen) --

A common assumption has been that, whether corporate political activity is good for the country, it is good for corporate shareholders. Why else would corporations want to get involved in politics? .... Counter to those perceptions, however, several studies suggest that companies seeking political advantage may not be doing their shareholders any favors. Rather, such activity [paying off politicians] may reflect the interests of corporate managers and benefit shareholders less than other possible uses of their money.

Link to the WaPo article webpage

This next link is TO INITIATE DOWNLOAD of the entire study -- Link to the study (PDF download) by Coates and Lincoln, Fulfilling Kennedy’s Promise: Why the SEC Should Mandate Disclosure of Corporate Political Activity

The Kennedy referred to is Justice Anthony Kennedy (not President Kennedy or Senator Kennedy). Kennedy provided the crucial fifth vote in the Citizens United 5-4 majority, taking the position that auditing of corporate political donations could and should be implemented under the Commerce Clause or other constitutional authority, although not by way of regulation of political campaign expenditures, as such, which would contradict the money-is-speech doctrine (that goes back to the 1980s).

Let's put Justice Anthony Kennedy's theory in the Citizens United case to the test! And maybe save the country into the bargain!

Those who are fortunate enough to own equity shares in multinationals are being shut out from any ability to audit corporate political donations that are not in their best interest as investors or as citizens of the United States .... but the SEC can change that!

To move forward with economic populism, we need to make corporate transparency an issue -- a key issue on which we decide our votes in 2012.

We need to do like President Truman, "I don't give them hell, I just tell the truth and they think it's hell."
______

[Links checked and functioning as of posting]

I must admit and why I put together the weekly "things that had me laughing out loud" SMC because it gets so absurd, so ridiculous, it's hard to spend a lot of time analyzing, writing up what works, when you have these things going on and you know any sane, rational, highly analyzed, not corrupted, highly targeted policy will never get even suggested, never mind passed.

The SEC guy compulsively jerking off at work via Internet porno,gee, what, there are only 30 million Americans needing a job at the moment?

"Nice Work If You Can Get It" by George Gershwin 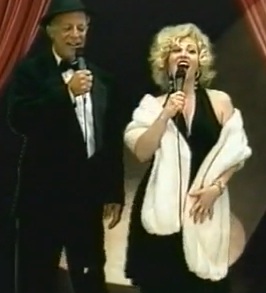 Below is the link to YouTube to view and listen to "Nice Work If You Can Get It" (George Gershwin), performed by Diana Dawn & Stan Pappas, singing a duet together in the style of Marilyn Monroe & Frank Sinatra, courtesy of The Spotlight TV Show... (NVTV-28)

After having decimated and demonized the unions. How long before the forty hour work week and time and half are back on the table? G.W. Bush made an attempt
http://www.villagevoice.com/2003-07-15/news/union-of-lost-souls/1/
and it won't be long before that and the minimum wage are targeted as "job killing regulation" , check your watch.
Do a search on "ending the forty hour work week", there are a lot of recent articles pushing just that. Goodbye dignity and hello $0.61 per hour.