The Census Bureau has found State Government revenues declined nearly 31% for 2009. Guess what is causing the shortfall, unemployment. Social insurance money goes into these funds from paychecks.

Total state government revenue dropped to $1.1 trillion in 2009, a decline of 30.8 percent from $1.6 trillion in 2008, according to the latest findings from the U.S. Census Bureau. The large decrease in total revenue was mainly caused by the substantial decrease in social insurance trust revenue.

State governments received nearly $1.5 trillion in general revenues in 2009, a decrease of 1.4 percent from 2008. General revenue does not include utility, liquor store or insurance trust revenue. 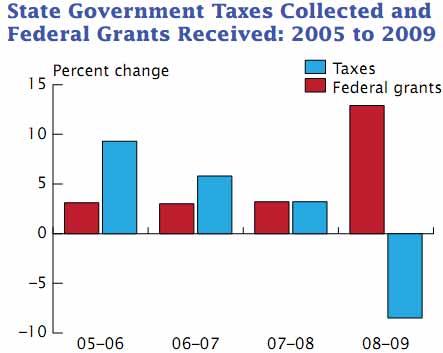 According to the Census, state government revenue comes from 47.9% taxes, 30% federal grants, 10.5% from service charges and the remaining 9.6% from other sources. 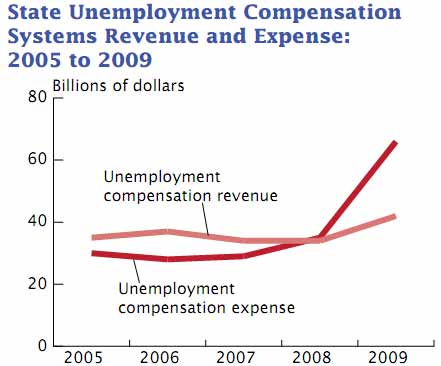 Here are the percentage increases in state expenditures for 2009:

Other spending such as infrastructure and interest on the debt remained unchanged in comparison to 2008.

Yes Virginia, in spite of the rhetoric, if people have jobs, overall tax revenues go up. You'd never get that connection from listening to the never ending sound byte nonsense rhetoric from pundits and cable noise. You want to fix the debt problem, especially with the States? Try jobs, jobs, jobs, jobs & jobs.

No surprise after this report overview.