Going to college these days amounts to sinking oneself into a lifetime of massive debt.  A new student advocacy report spells out some damning facts.  Did you know the federal government is slated to make a whopping $34 billion in 2014 off of student loans?  Meanwhile other reports are showing student debt is keeping people from obtaining credit, buying a home and moving on with their lives.

According to the New York Fed, student loan debt has tripled over the last eight years to a whopping $966 billion in by the end of 2012.  That is a 70% increase in borrowers and a 70% increase in debt held by each.  Student loan debt is now the largest consumer debt, second only to residential mortgages and one of the reasons is student debt is not discharged through bankruptcy.

Below is the breakdown of debt held by students.  Almost 60% of students hold debt greater than $10,000.  Now imagine not being able to get a job, or having to take a minimum wage job and make payments on that debt.  Not a pretty picture. 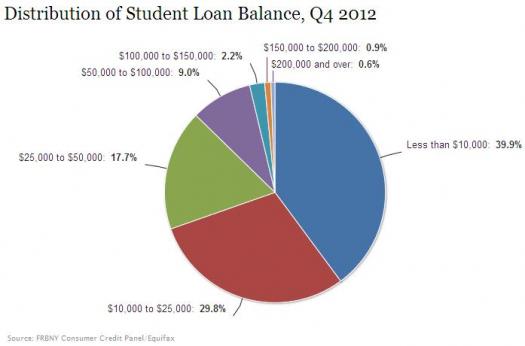 Student Debt is a clearly a crisis.  Yet, the interest rate on student loans is set to double from 3.4% to 6.8% on July 1st, 2013.  As a result of this interest rate increase, the federal Government is set to make big bucks off of desperate former students drowning in debt.

Think Congress is on the case to make college affordable again?  Hell no.  From the advocacy study we see benefits to students being used to pay down the debt.

As part of the Budget Control Act, Congress reached a bipartisan commitment to maintain a maximum Pell grant of $5,550 for low-income students and provided $17 billion in additional funding over two years for Pell grants. Unfortunately, to find the funds, Congress eliminated the in-school interest subsidy for all graduate student loans and also eliminated most student loan repayment incentives. These cuts generated $4.6 billion more ‘savings’ than were needed to maintain the Pell maximum. Rather than re-invest those billions in student aid to keep college affordable, congressional leaders applied those dollars to deficit reduction.

Student debt is just another attack on American citizens.  It used to be college was affordable as well as the ticket to a stable career, the American dream.  That dream has been replaced by educational profit centers making money off of hope.  Even worse, for many, despite having fresh skills straight out of school, they still cannot get a job.

My daughter just finished paying off her student loans, several years after graduating. It is a shame but politics are definitely involved and causing undue strain on students and parents.

The govt is not "making 34B," at least in the end, they won't make squat. They're going to get crushed. How much will they be "making" when all those kids who studied lib arts and now work at starbucks default? The govt will be losing bigtime on this because the govt is terrible at deciding who is worthy of credit.