How much money did we make off the client?

This quote describes the new corporate culture exposed by ex-Goldman Sachs employee Greg Smith. In a scathing commentary, Smith says Goldman Sachs preys off of their clients and the company is all about making money...for Goldman Sachs and themselves, that is. Internally they call clients Muppets, institutions and people to milk money from.

It makes me ill how callously people talk about ripping their clients off. Over the last 12 months I have seen five different managing directors refer to their own clients as “muppets,” sometimes over internal e-mail. Even after the S.E.C., Fabulous Fab, Abacus, God’s work, Carl Levin, Vampire Squids? No humility? I mean, come on. Integrity? It is eroding. I don’t know of any illegal behavior, but will people push the envelope and pitch lucrative and complicated products to clients even if they are not the simplest investments or the ones most directly aligned with the client’s goals? Absolutely. Every day, in fact.

Goldman Sachs is scrambling, issuing their own op-eds claiming 89% of the employees give 100% to the client. Comedians are also having a field day with the banter:

In the letter, in which he excoriates Goldman and his practices, Mr. Smith comes across as a man of conscience, ideals, and high moral standards. And as you read his words, you no doubt asked yourself this troubling question: how could Goldman have hired such a person?

At Goldman, we pride ourselves on our ability to scour the world’s universities and business schools for the finest sociopaths money will buy. Once in our internship program, these youths are subjected to rigorous evaluations to root out even the slightest evidence of a soul.

Other sites are putting up scores of image sarcasm. 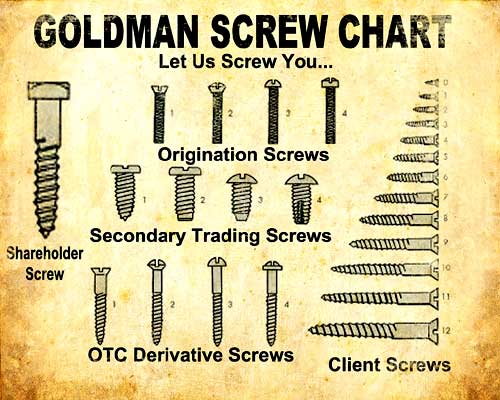 Yet isn't this old news, we've known for years Goldman Sachs screws their clients. While the press explodes over this latest scandal, we have plenty of other banks screwing not just clients, but entire nations. Take just a couple of recent examples.

We have banks making money off of the government. Corporations are sitting on cash, trading derivatives & bonds instead of investing and lending to the production economy.

U.S. banks bought more government and related debt in the first two months of 2012 than they did in all of last year.

Instead of providing credit, they are exploiting the gap between the Fed’s target interest rate for overnight loans and Treasury yields to make profits.

Then there is this investigation suggesting big banks are manipulating the LIBOR. The LIBOR sets the rate at which banks lend to other banks. Manipulation of this key rate would bloat interest charges across a wide range of financial products.

Last week, the Justice Department said in a letter to a federal judge that it was conducting a criminal investigation of alleged Libor manipulation. Officials in Switzerland, Canada and the United Kingdom are also looking into the issue, according to disclosures in several banks' public filings. In addition, a number of banks, including Bank of America, Citigroup, HSBC, JPMorgan and Credit Suisse, are defendants in a U.S. civil case brought by investors -- ranging from mutual funds to individual traders to the city of Baltimore -- who say they lost profits due to Libor distortion as far back as 2006.

Lest we not forget, the entire mortgage fraud settlement is almost a license to steal from homeowners.

While the Internets are all a stir over Mr. Smith's commentary, couldn't most employees of most companies say pretty much the same thing? From cell phones to cable to technology, hasn't America gone from a ethical business culture to one of dog eat dog, predator and prey?

Isn't this the problem generally? A sociopathic, dog eat dog, only one can survive, how low will you go society that America has now become?

I keep seeing the term "immoral," but what we're seeing is "amoral." Morality and immorality imply the existence of a code, a list of things that are right or wrong. The new state religion of America is the worship of money. In pursuit of a quick buck, anything is permissible. Morality doesn't enter into it.

Your analysis on Goldman Sachs is really an example of how most large financial banks operate. Whether it is an investment bank like Goldman, or commercial like Bank of America, clients are put last. While this is horrid, it only exists in a world not ruled by free markets. Banks access to easy credit and label of "too big to fail" creates a moral hazard that allows this to happen. If banks were accountable to their clients, had actual competition available, and were not bailed out, the corrupt ones would go out of business. While I sincerely hate the banks, I hate the government and Federal Reserve more for allowing it to happen.