One hundred million dollars in $100 bills fits nicely on a standard-sized pallet. The image below shows what $1 trillion in cash would look like. This is almost what U.S. corporations have spent on stock buybacks — just in the last year. 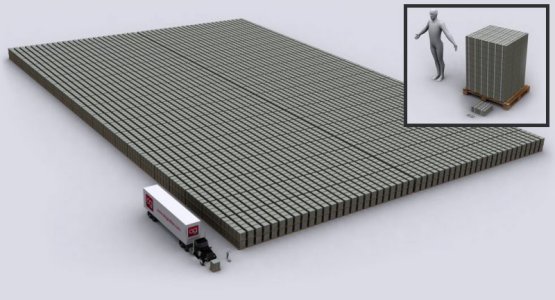 According to a study by the Roosevelt Institute (Disgorge the Cash), businesses once borrowed to invest and improve their company's long-term performance. But for the past 30 years business investment has been replaced by shareholder payouts. Companies now borrow to enrich their investors in the short-run (including their executives with stock option grants as pay for performance).

The study shows good evidence that the real economy benefits less from the easier credit provided by macroeconomic policy than it once did. Higher corporate profits in recent business cycles have generally failed to lead to high levels of investment — and cheaper money from lower interest rates failed to stimulate investment, growth and wages — because additional funds are funneled to shareholders through buybacks and dividends.

Andrew Ross Sorkin (at the New York Times) recently reported that the chief executives of 500 of the nation’s largest companies will receive a letter in the mail from Laurence D. Fink, chief executive of BlackRock, the largest asset manager in the world (with $4 trillion in assets). He will tell these business leaders that too many of them have been trying to return money to investors through so-called shareholder-friendly steps like paying dividends and buying back stock.

As noted in another post at the Economic Populist, U.S. businesses made $1.8 trillion in after-tax profits last year alone. To date they have over $2.1 trillion in overseas profits stashed offshore. They are also currently paying historically low "effective tax rates". And last year the U.S. merger-and-acquisitions market saw the number of deals worth at least $1 billion rise 43% from the year before. Now we learn that American companies have spent nearly $1 trillion (just last year alone) on stock buybacks and dividends — and almost every big American company uses this strategy.

Meanwhile, infrastructure spending in the U.S. is historically low, and falling very far behind other nations (like China).

BlackRock's CEO says this strategy of stock buybacks “sends a discouraging message about a company’s ability to use its resources wisely and develop a coherent plan to create value over the long term” [and argues that] “with interest rates approaching zero, returning excessive amounts of capital to investors isn’t helpful because they will enjoy comparatively meager benefits from it in this environment.”

According to the NYT article:

[BlackRock's CEO] recommends that gains on investments held for less than three years be taxed as ordinary income, not at the usually lower long-term capital gains rate, which now applies after one year: “We believe that U.S. tax policy, as it stands, incentivizes short-term behavior. Since when was one year considered a long-term investment? A more effective structure would be to grant long-term treatment only after three years, and then to decrease the tax rate for each year of ownership beyond that, potentially dropping to zero after 10 years.”

Mr. Fink contends that such a shift in tax policy “would create a profound incentive for more long-term holdings and could be designed to be revenue neutral. In short, tax reform that promotes long-term investment will benefit both the companies who rely on capital markets and the hundreds of millions of people saving for retirement.”

Asked whether such a change in tax policy would reduce liquidity in the market, Mr. Fink scoffed: “I don’t think Warren Buffett cares about liquidity that much.” Mr. Fink was taking a direct shot at the rise of activist investors, like Carl C. Icahn, who have made careers out of pressing companies to return cash to shareholders.

Corporate executives in the U.S. have been breaking bad for the past 30 years. 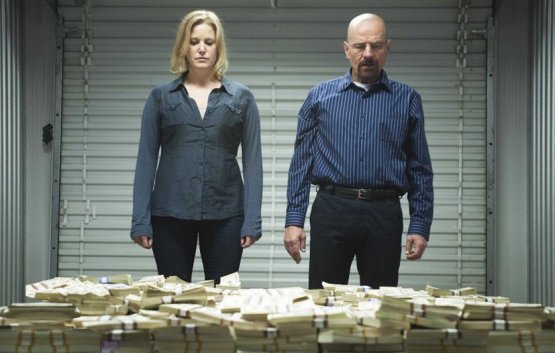 Stock buybacks increase the value of the remaining outstanding shares of a company, which increases the values of corporate executives compensation packages. Stock option grants and bonuses are awarded to CEOs and other company executives as "pay for performance".

But according to Stumbling and Mumbling and studies he cites), bonuses can be inefficient, and actually reduce productivity — while also increasing inequality. The author also writes: "I suspect that the main justification for bonuses is not so much that they elicit effort, but rather that they are a form of efficiency wage: bosses and CEOs who cannot be effectively monitored must be bribed handsomely not to steal the firm's assets."