The ultra-wealthy uses the tax code as a weapon in their class-war against the poor by paying less than their fair share of taxes, when in a progressive tax system, the most wealthy are supposed to pay a greater percentage of their incomes --- because they are more able to contribute more, which benefits the most.

For almost a century, starting with capital gains* in the Revenue Act of 1921 (near the end of the Gilded Age), the top 1% has always received most of the tax breaks; and that's because they have the means and the connections to lobby members of Congress for special tax provisions.

* The top 1% earns most of their wealth with investments in stocks. The top 10% holds about 80 percent of all stock market wealth (The stock markets have over doubled since March 2009). Those who derive income from stocks pays a capital gains tax on realized gains, just as CEOs who earned stock options as "incentive pay". After one year they pay a 23.8 percent tax rate for federal taxes, less than the top marginal rate of 39.6 percent for regular wages --- and this income is not subjected to any Social Security taxes. In 1977 the capital gains tax rate was 40 percent. Changes in the tax law that reduced the federal tax rate on capital gains income is by far the largest contributor to rising income inequality in the United States.

But occasionally, because of a U.S. Court or public outcry, Congress is induced to change a tax law --- that is, until another loophole is found and exploited, or a new tax bill favoring the rich is passed, or Congress is forced to amend the tax code --- that's why we have such a complicated tax code today.

It's odd that when 50% of all U.S. wage earners are taking home $27,000 a year or less (forcing many to use food stamps), we also hear members of Congress saying that these same people should "put more skin in the game" (when they barely earn enough to live on as it is). While at the same time, these government-paid politicians are advocating for more tax breaks for the top 1%, saying it will create jobs. Especially nowadays, with the poverty rate at 15% as we've seen the very top enjoying record-high capital gains through record-high corporate profits. Meanwhile, the very bottom has been suffering with declining wages, or worse, with long-term unemployment (maybe because their jobs were offshored to China).

It's just as disingenuous when we see members of Congress (on both sides of the aisle) introduce legislation to close many of these tax loopholes --- because it's only a publicity stunt --- and they know full well that the majority of their congressional colleagues would never pass such a change in the tax code. It's all grandstanding and pontificating, and the American people are finally starting to realize this --- thanks mostly to the internet (and not cable news).

And because half the members of Congress are millionaires themselves, and are also invested in real estate and the stock market (and pay capital gains taxes), they also benefit from the very same preferential tax laws that they themselves write and pass --- which is sort of like the fox guarding the henhouse.

Politicians, lobbyists and other representatives of the super rich love to confuse people on taxes so they can add even more tax breaks and loopholes for the wealthy. To be clear, the tax code most used by the top 1% is the business tax code, as explained in this post.

From a judge in a comment from the U.S. Court of Federal Claims, on a giant tax avoidance scheme called STARS (“Structured Trust Advantaged Repackaged Securities”) peddled by the big bank Barclays and several other several various financial entities:

"The conduct of those persons who were involved in this and other transactions was nothing short of reprehensible. Perhaps the business environment at the time was 'everyone else is doing it, why don’t we?' Perhaps some of those who participated simply were following direction from others. Nevertheless, the professionals involved should have known better than to follow the STARS path, rife with its conflicts of interest, questionable pro forma legal and accounting opinions, and a taxpayer with a seemingly insatiable appetite for tax avoidance."

One of defendant’s experts aptly stated that “enormous ingenuity was focused on reducing U.S. tax revenues.” The Court shared this view that “the human effort, the amount of creativity and overall effort that was put into this transaction is a waste of human potential.”

And this goes for the peddlers of tax avoidance schemes more generally (e.g. Apple etc.). This reminds us of a paper by the Bank for International Settlements, cited by the Tax Justice Network in a recent paper, The Finance Curse: How Oversized Financial Sectors Attack Democracy and Corrupt Economics:

"Finance literally bids rocket scientists away from the satellite industry. The result is that erstwhile scientists, people who in another age dreamed of curing cancer or flying to Mars, today dream of becoming hedge fund managers."

There are some very clever and ingenious people at these banks. Indeed, what a tragic waste of their lives. Recently JPMorgan reached a $920 million settlement with four of its regulators over the London Whale matter, a high risk trading strategy where bank deposits were used to gamble in illiquid credit derivatives in London.

As the Center for Economic and Policy Research has pointed out, the latest Congressional Budget Office (CBO) report suggests strongly that in containing projected long-run deficits, the U.S. has a tax problem, not a spending problem:

An under-appreciated part of this tax problem is the continued tax avoidance (and sometimes outright tax evasion) by many U.S. multinational corporations. The CBO assumes that corporate tax revenues will average 2.2 percent between 2014 and 2023—basically falling from 2.5 percent of GDP in 2015 to 1.9 percent by 2023. After 2023, CBO assumes that corporate tax revenues will remain at 1.9 percent of GDP, which is about what the average was between 1973 and 2012.

A good start toward increasing corporate tax revenues was a bill that was introduced in the Senate by Senators Levin, Whitehouse, Begich, and Shaheen. The Stop Tax Haven Abuse Act (S. 1533) would close some corporate loopholes and provide measures to combat the corporate use of offshore tax havens to evade paying U.S. taxes. But what are the odds of a bill like it ever passing both chambers of Congress before President Obama could sign it? In the current state of political and ideological divide, it would most likely take a majority of Democrats (in the progressive caucus) in both the House and the Senate before a bill like this could ever have a chance of passing (despite the fact that most Americans would support this bill according to many previous polls.).

Thanks to Congress, much of the current tax "avoidance" has been perfectly legal (or not). See a few examples at Forbes --- Billionaire Poster Boys For Tax Reform:

And what would the National Football League have in common with the business lobbying group, the U.S. Chamber of Commerce? Their tax status. A provision in the tax code essentially says the NFL is just like the Tea Party, a nonprofit organization.

"Section 501(c)(6) of the Internal Revenue Code provides for the exemption of business leagues, chambers of commerce, real estate boards, boards of trade and professional football leagues, which are not organized for profit and no part of the net earnings of which inures to the benefit of any private shareholder or individual."

In 1966 Congress allowed the NFL to qualify for 501(c) tax exempt status. From the Atlantic, How the NFL Fleeces Taxpayers: “ Congress gave away the store to the NFL while getting almost nothing for the public in return.” Other professional sports leagues followed suit, taking advantage of the new rules.

But just like with Apple, how can anyone say the NFL "fleeced" us when for decades members Congress have been the one who took campaign contributions in exchange for these tax laws to favor the richest over the poorest. It was Congress that has been doing all the "fleecing" since 1921, when they first enacted the capital gains tax for the wealthy --- and they have served them ever since.

Recently a Republican U.S. Senator (Tom Coburn) has introduced a bill called the PRO Sports Act, which would amend the tax code and would revoke the 1966 exemption. That's why the tax code is almost 75,000 page long --- because loopholes are constantly being added to favor the wealthy, and occasionally (only after a public outcry) will Congress pass an amendment to the tax code, making the tax code that much longer and even more complicated. That's why taxpayers pay an enormous sum of money to hire tax attorneys (big businesses use an army of attorneys to skirt the law and small businesses go broke trying to legally comply with the law), whereas as most of us might only need to file a single page 1040EZ form.

There is a class-war (that the top 1% waged on the bottom 99%) and as Warren Buffett said, their side is winning. The top 1% uses members of Congress as their expendable pawns in their strategy for continuing to win this war. And their weapon of choice has been the tax code. 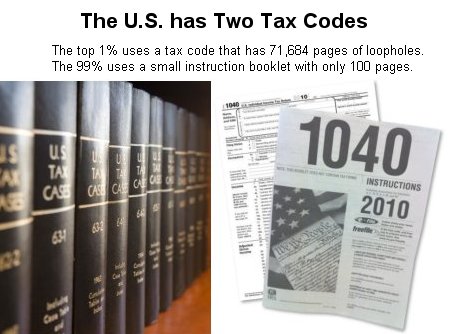 Talking about how the American people want them to stop giving to the rich instead of what Congress is doing.

Your articles add to the site. Just recently even the Pope was challenging how the economy is not for Wall Street, but is main street and your articles help amplify that point.

Let's face it you Can't make a Poor man Rich. How many Poor people have won the Lottery and are Now Broke. Rich People only invest when they know something the average person does not know. We are Not privy to that information. How to change that I don't know. But sharing the Wealth only makes the Middle Class more Poor.

Your lack of reasoning defies facts. The U.S. middle class was strongest when the U.S. had the most progressive tax code. In other words, wealth redistribution through the U.S. tax code, set in place starting with FDR and staying in place during the 1960's.

It never ceases to amaze me how wrong so many Americans are on the facts and we'll blame those ridiculous talking heads on radio and TV feeding you lies.

you are so way off base it's beyond belief. Most people, my parents included (silent generation) just wanted to be paid a living wage for their labor. And due to many different variables after WWII, they got just that. Not only did my mother and father do better than their parents, they achieved what in America what before and now is impossible...a broad middle class