September's unemployment report is worse than the 58,000, sans striking Verizon workers, job growth. People being forced into part-time jobs skyrocketed by 444,000 in a month, to a tally of 9,270,000 people.

The BLS released real earnings and wages. This is hourly and weekly earnings where inflation has been removed. It gives the real purchasing power of wages relatively over time as well as shows if wages have kept up with inflation. 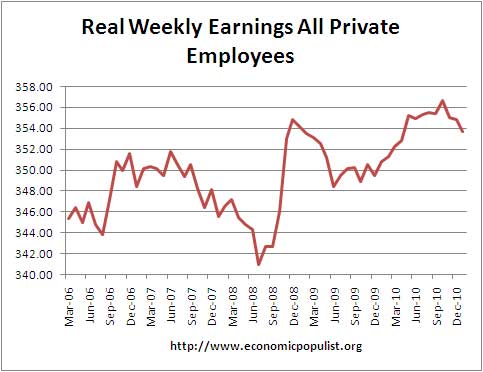 The March 2010 employee costs report was released today. The average wage is $20.67/hr. Benefits costs average $9.71/hr. This brings wages and benefits employer costs to a whopping total (sic) of $29.71/hr. Believe this or not, state and local government workers are the last holdouts in terms of getting good benefits.

When I see the stock market roar over workers getting squeezed and screwed I'd like to scream. But such is today. 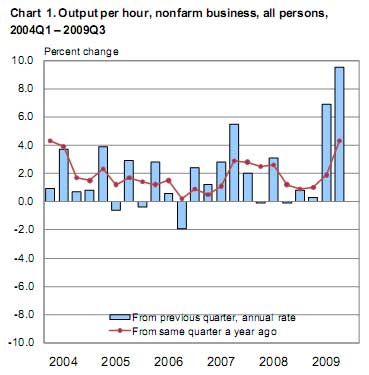 Labor Department announced today that productivity of U.S. workers rose 6.4% in the second quarter of 2009. Productivity is measured by output per hours of workers. The largest increase since the third quarter of 2003.

Here is the kicker:

The huge increase was due to hours working declined faster than output.

Oh, wait there is more:

So, wages are not even competing up with inflation.

We have the productivity-wage gap growing. We have hours worked falling. We have real hour compensation decling.

This all translate to more destruction of the middle class and more income inequality. Our economic growth model is broken, as Dr. Palley argues, and this report is just another example of that.

I am adding these quotes from this news story because, in my opinion, show the total disregard for the survival of the middle class:

Remember that phrase race to the bottom?