Investors and the press love to read the tea leaves of the FOMC meeting minutes.  Most in the press believe July 31st Federal Reserve Open Market Committee meeting minutes confirm quantitative easing, the $85 billion a month in mortgage backed securities and asset purchases, will be reduced starting in September.  We don't know that answer but we can guess.   From the minutes:

Almost all participants confirmed that they were broadly comfortable with the characterization of the contingent outlook for asset purchases that was presented in the June postmeeting press conference and in the July monetary policy testimony.

Most are interpreting this to mean September 17-18th will be when the Fed begins tapering of the $85 billion a month in mortgage backed securities and T-bills, but it could also mean December.  Ending quantitative easing by the middle of 2014, assuming $10 billion a month tapering, implies an eight month window.  By the time to taper alone, one might expect September to be the date of the first announcement.  Yet odds are the FOMC will do a test the waters taper in September of a small reduction in asset purchase amounts.  The real ending of quantitative easing, the bulk of the reduction in asset purchases, when then be happening in December.  Below one can see the debate among Committee members, which hints towards some sort of compromise action in September 2013.

While a range of views were expressed regarding the cumulative improvement in the labor market since last fall, almost all Committee members agreed that a change in the purchase program was not yet appropriate. However, in the view of the one member who dissented from the policy statement, the improvement in the labor market was an important reason for calling for a more explicit statement from the Committee that asset purchases would be reduced in the near future. A few members emphasized the importance of being patient and evaluating additional information on the economy before deciding on any changes to the pace of asset purchases. At the same time, a few others pointed to the contingent plan that had been articulated on behalf of the Committee the previous month, and suggested that it might soon be time to slow somewhat the pace of purchases as outlined in that plan.

Another view on why the Fed will start tapering in September might be seen in the below graph.  The Fed's balance sheet just tipped the scales at $3.6 trillion. 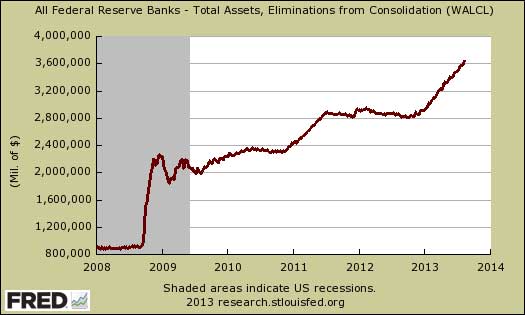 The Fed also hit a new record, they now owe over $2 trillion in U.S. debt by buying U.S. Treasuries. 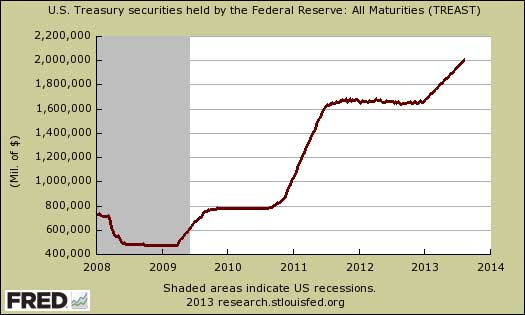 Look at how much they are also holding in mortgage backed securities in the graph below. 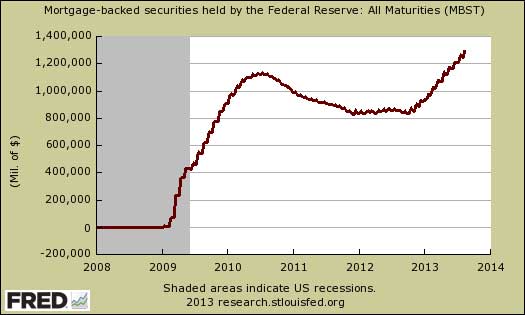 Beyond the above very scary graphs that are rarely mentioned these days is the original statement by Bernanke in his June 19th press conference:

If the incoming data are broadly consistent with this forecast, the Committee currently anticipates that it would be appropriate to moderate the monthly pace of purchases later this year. And if the subsequent data remain broadly aligned with our current expectations for the economy, we would continue to reduce the pace of purchases in measured steps through the first half of next year, ending purchases around midyear. In this scenario, when asset purchases ultimately come to an end, the unemployment rate would likely be in the vicinity of 7 percent, with solid economic growth supporting further job gains.

The element which really could slow the Fed's tapering decision is actually inflation, seemingly glossed over by most in the financial press  Inflation is mentioned in the FOMC meeting minutes and we went into great depth in this article as to why inflation is the real key economic metric for the decision to taper.  From the minutes, the FOMC is assuming inflation will be close to their target rate, yet the minutes mentioned again too low inflation is the most serious of all economic risks:

The most salient risk for the inflation outlook was that the recent softness in inflation would not abate as anticipated.

So, those guessing when quantitative easing will end should be watching those inflation statistics much more closely than the unemployment rate.

Another element mentioned by the FOMC is the sequester.  In spite of what one hears on various talk radio and cable TV channels, the budget cuts did negatively impact economic growth.  From the minutes.

Private domestic final demand continued to increase in the face of tighter federal fiscal policy this year, but several participants pointed to evidence suggesting that fiscal policy had restrained spending in the first half of the year more than they previously thought. Perhaps partly for that reason, a number of participants indicated that growth in economic activity during the first half of this year was somewhat below their earlier expectations.

Bottom line, the continuing of Wall Street's crack cocaine quantitative easing can in part be blamed on Congress.  They cut spending at a time when the never ending sputtering economy and job market sure didn't need it.  That said, eventually this will have to end and the sooner vs. later timing is more a trader's game vs. a concern of all those Americans still without work.

Wages versus gold: A look at historical data - 28742 reads
The de-industrialization of the U.S. - 47509 reads
Corporate Profits Soaring Thanks to Record Unemployment - 75766 reads
Safeway Skewered for Throwing 6,000 Workers Under the Bus in Video Parody - 327425 reads
Housing and Recessions, Or, This Time it Isn't Different - 13713 reads
Tax Facts Show Lower Personal Income Taxes Will Not Create Jobs - 30522 reads
Economic things I learned or overheard this Memorial Day - 9015 reads
One cold snap uses 11.5% of US natural gas supplies; 8 more weeks like that and our gas storage will be totally empty - 85883 reads
The Cost of Left-Wing hate - 113148 reads
Michael Bloomberg Possible Run for President Would Gut Social Security - 25089 reads

END_OF_DOCUMENT_TOKEN_TO_BE_REPLACED

Wages versus gold: A look at historical data - 28742 reads
The de-industrialization of the U.S. - 47509 reads
Corporate Profits Soaring Thanks to Record Unemployment - 75766 reads
Safeway Skewered for Throwing 6,000 Workers Under the Bus in Video Parody - 327425 reads
Housing and Recessions, Or, This Time it Isn't Different - 13713 reads
Tax Facts Show Lower Personal Income Taxes Will Not Create Jobs - 30522 reads
Economic things I learned or overheard this Memorial Day - 9015 reads
One cold snap uses 11.5% of US natural gas supplies; 8 more weeks like that and our gas storage will be totally empty - 85883 reads
The Cost of Left-Wing hate - 113148 reads
Michael Bloomberg Possible Run for President Would Gut Social Security - 25089 reads
Will the NY Attorney General Bring Doomsday Charges Against Wall Street? If So, How Long Will He Survive? - 1148647 reads
New York Post Claims Census Falsifies Unemployment Figures - 874183 reads
Safeway Skewered for Throwing 6,000 Workers Under the Bus in Video Parody - 326711 reads
Tax Cuts for the Rich Do Not Generate Jobs - 243048 reads
U3 and U6 Unemployment during the Great Depression - 240528 reads
Delusions of Normalcy 2011 - Dismal Scientists Cheer Up - 230420 reads
The war on the middle class - 210296 reads
Obama Promises to Create 2.5 Million Jobs, but in What Countries? - 191186 reads
How to Dump Your Muni By 60 Minutes - 184030 reads
Mortgage Deal Under Discussion - Obama Administration and Big Banks - 174526 reads